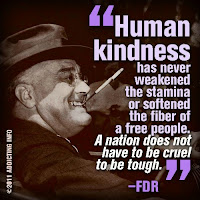 "Human Kindness has never weakened the stamina or softened the fiber of a free people.
A nation does not have to be cruel to be tough."  -Franklin D. Roosevelt 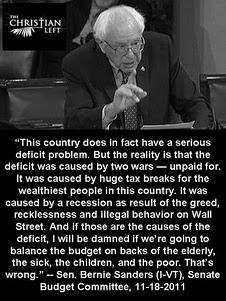 "This country does in fact have a serious deficit problem. But the reality is that the deficit was caused by two wars — unpaid for. It was caused by huge tax breaks for the wealthiest people in this country. It was caused by a recession as a result of the greed, recklessness and illegal behavior on Wall Street. And if those are the causes of the deficit, I will be damned if we’re going to balance the budget on the backs of the elderly, the sick, the children, and the poor. That’s wrong."  — Senator Bernie Sanders (I-VT), Senate Budget Committee, Nov. 18, 2011