The White House has apologized to Italian PM Silvio Berlusconi for a briefing describing him as a political "amateur" who is "hated by many". 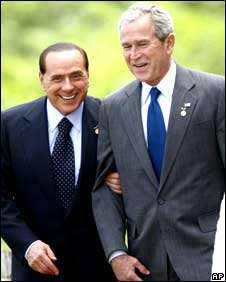 The "insulting" biography was included in a press kit distributed to reporters travelling with President George W Bush to a meeting of world leaders in Japan.

He was "one of the most controversial leaders" of a country "known for governmental corruption and vice".

The four-page description of Mr Berlusconi had been taken from the Encyclopedia of World Biography.

Berlusconi has been a staunch supporter of Bush's war in Iraq

At a G8 summit in 2006, Bush landed ally Tony Blair in some trouble by calling out "Yo Blair!"

Email ThisBlogThis!Share to TwitterShare to FacebookShare to Pinterest
Labels: Bush