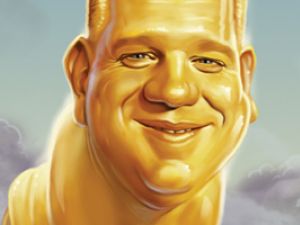 Glenn Beck has been ranting about the decline of the dollar and the coming of the "financial holocaust." After this fear mongering rant, he then advises his followers to "buy gold." In doing so he has become an accomplice to the California based company, Goldline International.

Rep. Anthony Weiner (D-N.Y.) is now targeting fear mongering shows including Beck and other right wing radio show hosts for "scaring the hell out of their customers and then using that fear to help their sponsor Goldline fleece them."

Throughout Glenn Beck's meteoric rise to become king of all right-wing media, a once-obscure Santa Monica peddler of gold coins called Goldline International has been along for the ride. The support of Beck and other radio hosts -- mainly conservatives like Mark Levin and Fred Thompson -- who spend 55 minutes creating fear of an economic collapse and then five minutes telling you why coins from a company like Goldline are the only safe haven has helped Goldline become a $500 million company.

This, for example, is what 2 million TV viewers who clicked on Beck's nightly Fox News Channel show heard on Oct. 6, 2009:

This isn't an advertisement, although it may sound like one. It's the editorial content of the show, although at some point during the hour viewers are sure to see an ad for Goldline with their "800" number prominently displayed. Meanwhile, visitors to GlennBeck.com see a big ad for Goldline, while visitors to Goldline.com can see testimonials from Beck for Goldline. It's hard to know sometimes where Beck -- who famously told his viewers to get behind "God, gold, and guns" -- ends and Goldline begins.

Never mind that anxiety-drenched radio listeners never got to hear the other side of the gold coin, which is that the industry is plagued by high-pressure sales tactics as well as high commissions which mean that gold -- already at a record high (although not when adjusted for inflation) -- would have to rise well beyond its current highs to see a reasonable return on their investment.

Finally, a grown-up has stepped in to try to clean up this mess -- Rep. Anthony Weiner of New York.

At this hour, Weiner is holding a news conference not only to call out Goldline as "a company that uses conservative rhetoric, high pressure sales tactics and tall tales about the future of gold to sell over priced coins that can be bought somewhere else for cheaper," but to ask regulators from the Federal Trade Commission and Securities and Exchange Commission to investigate its tactics.

Weiner's staff investigated Goldline and found that the coins it sells are not the good investment that its salesmen -- who are not licensed investment advisers -- claim that it is to consumers, because the price of gold would essentially have to double beyond its current high to begin seeing any gains. Specially, the investigators found Goldline coins selling for 90 percent above the melt value of the coin, that is, its value by weight. The largest markup seen on a coin, Weiner said, was 208 percent above the melt value.

"In the past there is always the "product" that is either the next big thing (the dot com boom) or the investment that will never go down in price (the housing market), and in the past much of the media has failed in its duty to conduct due diligence, but never before have they worked so hand in hand to cheat consumers," Weiner said in his prepared report. "Commentators like Glenn Beck who are shilling for Goldline are either the worst financial advisers around or knowingly lying to their loyal viewers."

Goldline's high pressure sales tactics and fear mongering about big government as well as their ability to hire sales staff and spokespeople who misrepresent their roles are case studies in why entities like the SEC and FTC are necessary.

For another perspective on "How Beck and other right-wing talkers turned paranoia into a pitch for Goldline, the gold dealer one congressman says is conspiring to "cheat consumers," see a Mother Jones investigation.
Posted by rross at 3:24 PM

Sadly, thom hartman,steph miller, and ed schultz, all have mad e their prerecorded paeans to the gold masters...it sucks the air out of the room to hear their commercials