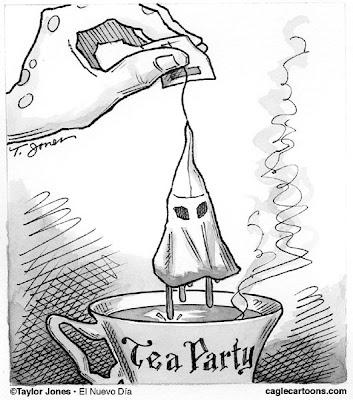 It has been quite a year in politics especially with the emergence of the Tea Party. The Tea Party now has several candidates on the ballots of many states in key political positions. To find out what some of the Tea Party's movers and shakers are saying, here are the "Top 10 Craziest Tea Party Quotes of All Time."

Remember that old show, “Children say the darndest things?” In this political climate, largely fueled by the tea party movement and a host of “not-ready-for-prime-time” hopefuls for elected office, that show could easily be revamped.

O'Donnell is the tea party-backed candidate seeking to replace Vice President Joe Biden in Delaware. She made the above statements on one of many appearances on Bill Maher's Politically Incorrect. She also stated on that show that she had dabbled in witchcraft before turning to Christianity. Since then, O'Donnell has basically gone radio silent refusing all media appearances other than Fox News.

2.) "Gay marriage is probably the biggest issue that will impact our state and our nation in the last, at least, thirty years. I am not understating that,” Rep. Michele Bachmann, R-Minn.

Bachmann said that back in 2004 while on the stump to deny gay marriage in her homestate of Minnesota. Back then, she was a State Senator. Bachmann was elected by the good people of Minnesota to the U.S. House of Representatives in 2006. Since then, she has continued on her narrow-minded tirade, claiming that "Democrats in Congress" needed to be investigated for being un-American and that all Congress should do -- once the Republicans reclaim the majority -- is send out subpoena after subpoena and investigate the Obama administration.

3.) "He has no place in any station of government and we need to realize that he is an enemy of humanity.” Rep.Trent Franks on Obama

Franks is an Arizona Congressman and said that last week during a conservative "values" forum. He also shortly later demanded that President Obama provide his birth certificate. When he was grilled by the media for making such an outlandish statement, his spokespeople claimed Franks was referring to "unborn" humanity and was speaking about Obama's stance on abortion. Yeah, right.


He's another tea party-backed candidate up in Delaware. He falsely claims "separation of church and state" was not in President Thomas Jefferson's 1802 letter to the Danbury Baptist Association. He said that last April. This guy also compared abortion to slavery. He's a real gem.

5.) "I have been in the situation of counseling young girls... who have had very at risk, difficult pregnancies. And my counsel was to look for some alternatives, which they did. And they found that they had made what was really a lemon situation into lemonade,” tea party-backed candidate Sharron Angle on abortion and why it should be illegal even in the case of rape or incest.

This woman also believes we should get rid of the Veteran's Administration and said essentially that big government equates Godlessness, because Americans then look to the government to provide from them as opposed to God. Sad thing is, she's tied with Sen. Harry Reid down in Nevada.

6.) “These are beautiful properties with basketball courts, bathroom facilities, toilet facilities. Many young people would love to get the hell out of the cities,” Carl Paladino, New York State te party-backed candidate for Governor. He was describing his idea to transform prisons into dorms for welfare recipients.

Paladino has a knack for making headlines for being, well unhinged. He threatened the life of a reporter while on camera. He also sent out a bunch of racist and pornographic emails to hundreds of political and media contacts. He's running against New York Attorney General Andrew Cuomo.

7.) "You'd have to strike any laws against beastiality, if you’re oriented toward corpses, toward children, there are kinds of perversions,” said Rep. Louie Gohmert on why there should not be hate crime legislation.

This Texas Republican said that back in May. He's also the same guy who claims that immigrant infants pose a risk to national security as they will one day create terrorist cells.

He said that back in June to Fox News. But if the media is so liberal, then what is Fox News? What is NewsCorp?

9.) "I hope that's not where we're going, but you know if this Congress keeps going the way it is, people are really looking toward those Second Amendment remedies and saying my goodness what can we do to turn this country around? I'll tell you the first thing we need to do is take Harry Reid out." -- Nevada GOP Senate candidate Sharron Angle.

That is the second entry by Angle, because she's just that crazy. She said that back in June. She also told Fox News the media should only report the news political candidates want them to report.

10.) “We took the Bible and prayer out of public schools, and now we're having weekly shootings practically. We had the 60s sexual revolution, and now people are dying of AIDS." — Christine O'Donnell, during a 1998 appearance on Bill Maher's 'Politically Incorrect.

That is a second entry for O'Donnell because she too is just that crazy. And here's a third because in fact she's crazier.

"Well, I don't think that the Obama administration knows what's Jesus, what belongs to Jesus and what belongs to them. That's my big gripe. Apparently, he doesn't know. But then, that's because he's not a Christian. He's Muslim," O'Donnell said last November.

"It's a proven fact he's Muslim. He wasn't born in this country. He was born in Kenya. There are people who know it, people who know where the birth certificate is. It's locked up and our government can't get a hold of it. He's a illegitimate president, in my estimation."

Nice, huh? How much do you have to really despise this country to elect this class of idiots into office?

It is time to stop laughing and to really evaluate the true impact of voting into political office people whose positions are based on fantasy, falsehoods and delusions.
Posted by rross at 9:27 AM

An idiot populace will elect idiot leaders. All of these insipid nutjobs are merely a reflection of the alarming percentage of American society composed of insipid nutjobs.

These are the kind of politics that you guys vote for. Looks like Brazil.

I thought the world stopped laughing at us when George Bush left office and we elected Obama. Now it’s getting past the point of being funny and becoming downright scary. I thought that with the signs of progress in race relationships, that things were looking up for this country. Now we have the Tea Party and young people who are abused and being driven to suicide. A hundred years from now, people will look back on these days like we look back on the days of racial segregation.

In O'Donnell's defense, she never said the last quote you attributed to her, the one about Obama being a Muslim from Kenya. The Washington Post story you linked to identified her only as "a woman with a handmade sign."

That being said, she's said a whole bunch of other crazy stuff.

"An idiot populace will elect idiot leaders. All of these insipid nutjobs are merely a reflection of the alarming percentage of American society composed of insipid nutjobs."

THIS...is why the Dems are in trouble dude. You merely confirm the contempt libs have for their fellow man's free will and decision making. The ultimate nanny (government) MUST be the only way to control the people, huh?

All aboard the crazy train! It has several stops in North Carolina. One of the crazy train conductors is a candidate for the 13th House district, Bill Randall, who believes BP and Obama colluded to cause the oil spill for their mutual benefit. Another conductor on the crazy train is a candidate for 7th House District, Ilario Pantano, who while on duty in Iraq emptied his clip into two unarmed Iraqi civilians and then emptied another clip into their dead bodies "as a message of violence". All aboard!

So, is that how we got Obama, Reid, and Pelosi?

there was never a show called "children say the darndest things." it was a series of books by art linkletter whose daily afternoon show ("House Party") featured interviews with children, many of whom were coaxed into saying "cute" things. the cutest were anthologized and published in book form.

w/r/t adults that should know better, i'm afraid that, apres quayle, w. bush, palin and now the tea partiers, we are beginning to witness the dawning of the era of know nothings. hell, palin has written more books than she's read !!

Anonymous: "THIS...is why the Dems are in trouble dude. You merely confirm the contempt libs have for their fellow man's free will and decision making. The ultimate nanny (government) MUST be the only way to control the people, huh?"

And this is why they (the "libs") are totally justified in calling out the Tea Party's ridiculous b/s. You posted anonymously because you cannot defend these conservative claims other than to say "Waaahh, the elitist liberals are being mean!"

People are entitled to their own opinions, but when they bring those opinions into the public scrutiny, they can't run home crying because everyone else says they're stupid.

A lot of individuals have terrible decision-making processes that are deserving of contempt because they are ignorant, backward, and just plain absurd. Try learning something.

The Democrats are the evil party, and Republicans are the stupid party.

There are a lot of people who are willing to close their eyes and vote for the stupid, because they are fed up with the evil.

I am not endorsing either side here; I am just stating the zeitgeist.

YES, there was a show called "Kids say the darndest things" and it was hosted by BILL COSBY from 1998 to 2000. Based on Art Linkletter's show. Maybe you should research this stuff before you open your mouth and insert foot.....?