Is Your State Giving Corporate Welfare? 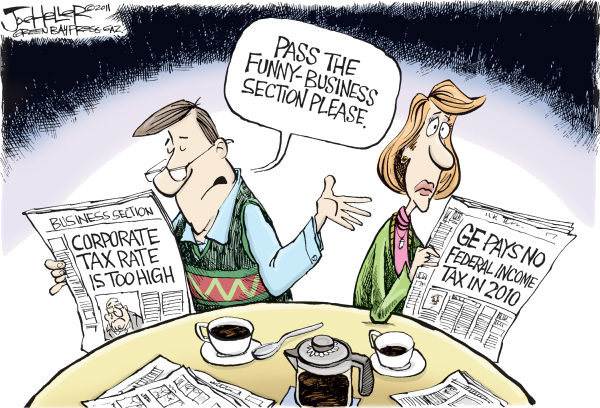 David Cay Johnston, a Reuters columnist, expresses his opinion about some employers being allowed to keep state income taxes, particularly in Illinois in "Paying taxes your employer keeps."

Hard earned income taken as a state tax is being given to some employers, not the state of IL

Painful as it feels to have a lot of hard-earned income taken from your paycheck for taxes, a new Illinois law does something Americans may find surprising. It lets some employers pocket taxes for 10 years.

You read that right — in Illinois the state income taxes withheld from your paycheck may be kept by your employer under a law that took effect in May. Continental Corporation, the big German tire maker; Motorola Mobility, the cell phone maker; and Navistar, the maker of diesel trucks for industry and the military, are in on the deal. State officials say a fourth company is negotiating a similar arrangement.

Chrysler and Mitsubishi arranged deals with the state in the depths of the Great Recession in 2009; Ford got one in 2007, since revised to let it keep half of its Illinois workers’ state income taxes. (See chart below.)

Instead of paying for police, teachers, roads and other state and local services that grease the wheels of commerce, Illinois workers at these companies will subsidize their employers with the state income taxes they pay.

The deal to let employers keep half or all of their workers’ state income taxes represents a dramatic expansion of a little-known trend in the law: diverting taxes from public purposes to private gain.

Throughout the United States, big box retailers like Wal-Mart, Lowe’s and Cabela’s, and in some cases entire shopping malls, often negotiate deals to keep sales taxes that customers pay at the cash register, using the money to finance construction of their stores. This gives them a huge advantage over retailers without such subsidies, while reducing revenue to local governments, which in turn creates pressure for higher taxes.

The Illinois deal shows how competition between the states, and with other countries, helps big corporations wring subsidies from state governments even as the states are being forced to fire teachers and other public workers because of a weak economy that has cost jobs and tax revenue.

The Illinois deal also shows how government, rather than the market, picks winners and losers. While America promotes the dream of a free market and competition, this sort of corporate socialism has been around since before the founding of the republic and has played a key role in the rise of many industries, including railroads, aircraft, as well as computer hardware and software.

Warren Ribley, director of the Illinois Department of Commerce and Economic Opportunity, said “it’s a fair question” as to whether taxpayers should be subsidizing businesses. He said elected leaders and the public should debate the issue.

“In the meantime,” Ribley said, “I am out there competing every single day with states and countries across the entire globe and I have got to have the tools and I have to use the tools provided by the General Assembly,” as the Illinois legislature is formally known.

State Representative Jack Franks, a Democrat from the northern end of Illinois, said the deals “are fundamentally unfair” to taxpayers and other companies.

“Our current governor had the genius idea of giving to Motorola and Navistar and others, he said to retain their business here, yet he is allowing Navistar to fire up to 25 percent of their workforce and still get millions from the state” by holding onto the income taxes of employees.

The Illinois law lets companies retain all of the income taxes withheld from the paychecks of workers whose hiring expands the payroll and half of the taxes for existing workers whose jobs are retained.

For Continental the deal means $22 million over 10 years diverted to its coffers from the state income taxes withheld from worker paychecks to help pay for a $224 million expansion of its Mount Vernon tire plant in southern Illinois. The deal will retain 2,500 jobs and create 400 more rather than prompt the plant to move to Mexico, Brazil or another state.

Based on a 3 percent average Illinois state income tax rate for people in that income range, and assuming Continental’s 2,500 hourly workers remain at the higher wage rate and 400 new workers are hired at the lower wage rate, the annual diversion of their income taxes would be as much as $1.9 million of the average $2.2 million annual benefit from the deal. Taxes paid by supervisors and managers, and expected higher wages in future years, account for the other $300,000 per year or so for the next decade.

Failure to create or retain jobs

Navistar is getting the deal even though its application shows it plans to reduce its workforce of 3,100 to about 2,200.

Ribley said companies that got earlier deals in which they avoided the state corporate income tax and then failed to create or retain jobs as promised have actually paid back the benefits.

The three companies that got the deal are not named in the law enacted in May, but the language of Public Act 97-2 defines them by describing the industry, employment level and other specifics that show how the law was tailored to benefit just them.

Here’s a prediction: other states soon will also authorize diverting income taxes withheld from worker paychecks to their employers, if some have not done so already — unless, of course, voters speak up on behalf of competitive markets and against this sort of corporate socialism.