The Destruction of the "Traditional Family" 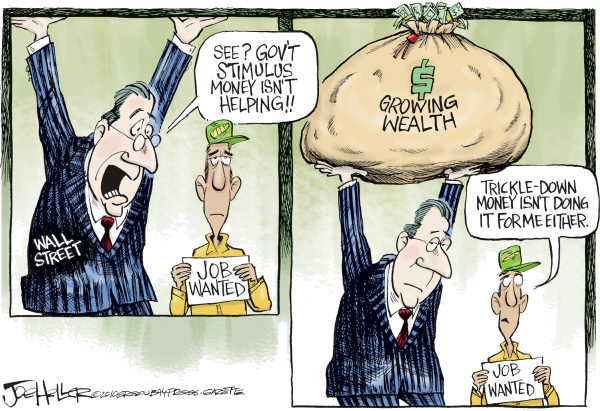 Via AlterNet by Alex Henderson: How Conservatives and the GOP Destroyed the "Traditional Family" They Claim To Treasure

Thanks in part to the GOP's failed policies, America is such a hard place to raise a family that many people are delaying getting married and having kids. [...]

John Schmitt, senior economist for the Washington, D.C.-based Center for Economic and Policy Research (CEPR), said the U.S. is actually a more prosperous country now than it was in 1950s, '60s or '70s; unfortunately, Schmitt said, most of the prosperity is concentrated at the very top. [...]

Deregulation of large corporations and tax cuts for the wealthy were two cornerstones of the Reagan/Bush Sr. era, and proponents of Reaganomics -- most of them social conservatives -- insisted that if the people at the very top prospered, their profits would “trickle down” to the middle class and the poor. Socially conservative Christian fundamentalist churches preached a “gospel of prosperity” to their middle-class and low-income flocks, urging them to vote Republican and assuring them that profits for the wealthiest Americans would also result in profits for them. Falwell, in his sermons and speeches, was as quick to praise Reaganomics as he was to condemn homosexuality, abortion, rock music and adult entertainment. But the economic data indicates that those corporate profits and tax breaks for the rich didn’t have a trickling-down effect but rather, set in motion a trend of more of the overall wealth being concentrated at the top. [...]

“If you want to talk about building a society that is family-friendly,” Schmitt said, “you need to have universal health insurance. You need to have some reform in the ways we deal with paid time off, including paid sick days, paid vacation time and paid parental leave.”

Clearly, economic stress -- not cultural liberalism -- is placing a heavy burden on family life in the United States. And unless present economic trends are reversed, the U.S. will continue to be a harsh place to raise a family.

Hi Iam Prabhu from chennai,joined today in this forum... :)