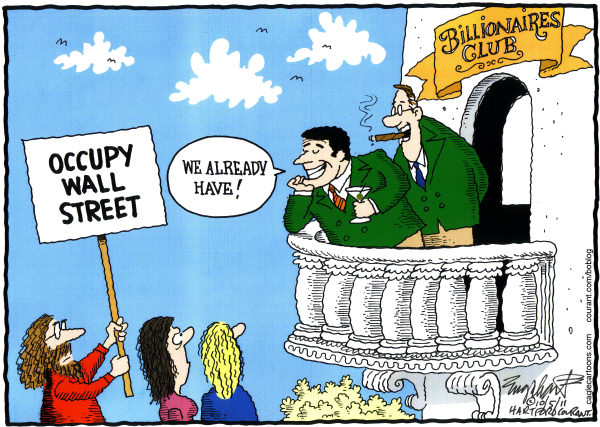 The mainstream media has given the Occupy Wall Street protest limited exposure. But the information coming from MSM would have you believe that the occupation is made solely of kids and hippies. Think again. WATCH:
Although many in the Occupy Wall Street movement do not want political support for their protest, many Democratic politicians have shown some solidarity with the protestors.

Which Democratic lawmakers have begun to embrace the Occupy Wall Street protestors?

"We share the anger and frustration of so many Americans who have seen the enormous toll that an unchecked Wall Street has taken on the overwhelming majority of Americans while benefiting the super-wealthy. We join the calls for corporate accountability and expanded middle-class opportunity."

"The silent masses aren't so silent anymore. They are fighting to give voice to the struggles that everyday Americans are going through."

"I applaud those protesters who are out there, who are focusing attention on Wall Street, but what we've got to do is put meat on that bone. We've got to make demands on Wall Street [and] break those institutions up."

"All of us should join that movement."

The chairman of the Federal Reserve, Ben Bernanke, was asked about the protests during his appearance before the Joint Economic Committee on Tuesday.

"I would just say very generally, I think people are quite unhappy with the state of the economy and what's happening," Bernanke said. "They blame, with some justification, the problems in the financial sector for getting us into this mess, and they're dissatisfied with the policy response here in Washington. And at some level, I can't blame them."

And a sole Republican has come out indicating that he sympathized with the protesters. Rep. Ron Paul (Texas), an outspoken Republican critic of the Federal Reserve, stated

“If they were demonstrating peacefully, and making a point, and arguing our case, and drawing attention to the Fed — I would say, good!

Occupy Wall Street is about ending corporate greed, getting jobs, building back the middle class and keeping the American dream alive. This is a national message that should not be limited to political divisiveness or ideology. We are the 99% and we are gaining strength!
Posted by rross at 12:33 PM