Headlines in the News 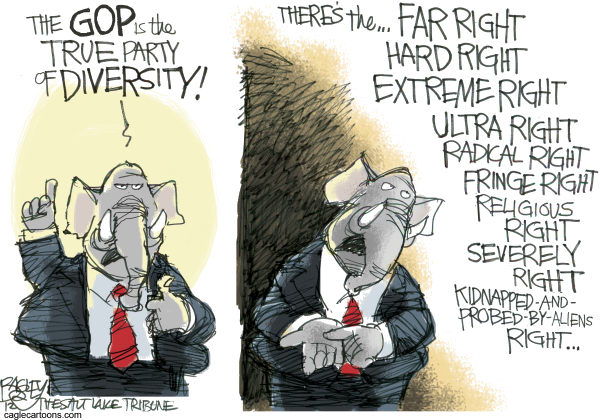 The Mittster’s latest Richie Rich moment from the campaign trail has him regaling an audience of economically anxious college students with some swell advice on how to succeed in business: just be like his “friend” sandwich shop entrepreneur Jimmy John, and get your parents to bankroll the costs of a start-up! Hey, that sounds easy — why didn’t I think of that?! Here’s Mittens:

This kind of divisiveness, this attack of success, is very different than what we’ve seen in our country’s history. We’ve always encouraged young people: Take a shot, go for it, take a risk, get the education, borrow money if you have to from your parents, start a business. READ MORE


Food Stamps In Crosshairs Of Republicans' Plan To Save Military

For the Republicans' constant trumpeting of saving the economy in public, they have proven time and again that's exactly the opposite of what they want to do. The latest: the GOP would like to save the disproportionate defense spending by... cutting food stamps. No, America, they do not care about your well being, or whether all of us can afford to eat.


In a memo sent to members Wednesday instructing them how to write their reconciliation bill, Republicans picked a number of targets, including extracting $80 billion from federal workers and $44 billion from health care. In all, it identifies $78 billion to cut in 2013, and details around $300 billion over 10 years.

But the memo spends the most time targeting the exploding cost of food stamps, on which more Americans rely than ever, at greater expense to the government than ever before.

Each month during fiscal 2011, an average of 45 million mostly poor Americans received benefits under the Supplemental Nutrition Assistance Program, or SNAP, at a cost of $78 billion to the federal government. Last year's SNAP participation represented a 70 percent increase from 2007, and the highest enrollment the program has ever seen. In that time, the cost of the program more than doubled. READ MORE

One of the problems with the employer-centered healthcare model that we adopted accidentally during and after World War II is that it does a pretty good job of hiding costs. Sure, our premiums and copays rise every year, but most of us have very little idea how much our medical insurance really costs. We pay a small portion, and the rest is, from our point of view, effectively free. By contrast, in European countries, which have done a much better job of controlling costs than the U.S., spending comes largely out of tax dollars, which means that legislatures and taxpayers have to face up to the cost of healthcare every year when they pass a budget. The fact that the process is played out in the rough and tumble of the political spotlight gives everyone a strong incentive to hold down spending. After all, rising costs mean rising taxes.

Until the cost of medical care bites, Americans won't put a lot of pressure on the healthcare industry to rein in its prices and administer care more efficiently. Taxpayer-supported national healthcare could help us get there. The relative efficiency of Medicare and Medicaid are bellwethers we should pay attention to. READ MORE

How can a political party be so dumb as to piss off Hispanics, women, and young people? Because the core of its base is middle-aged white men – and it doesn’t seem to know how to satisfy its base without at the same time turning off everyone who’s not white, male, and middle-aged. READ MORE
Posted by rross at 11:08 AM