What's in a Name other than a Frame? 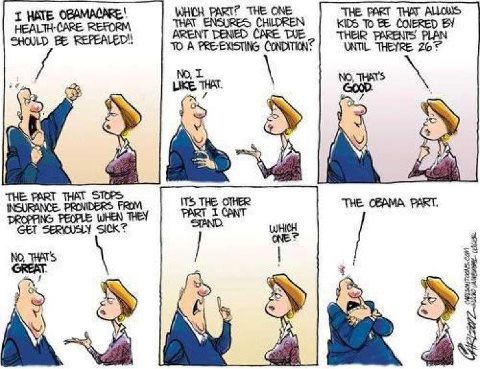 Via Joan McCarter at Daily Kos:

Obamacare unpopular, unless it's not called Obamacare

Another poll, and more confirmation that people really don't like Obamacare but ...

(Reuters) - Most Americans oppose President Barack Obama's healthcare reform even though they strongly support most of its provisions, Reuters/Ipsos poll showed on Sunday, with the Supreme Court set to rule within days on whether the law should stand. Fifty-six percent of people are against the healthcare overhaul and 44 percent favor it, according to the online poll conducted from Tuesday through Saturday.

They don't like it—that is, until they hear about what's in it. Same old story. Greg Sargent got the partisan breakdown from Reuters/Ipsos on this poll.

Just don't call it "Obamacare" and it's all good, even with Republicans—except for that bit about making things a little easier for the working poor, because that's practically anti-American.
The problem, of course, is that you can't separate the law from the very effective (albeit shockingly untruthful) narratives the Republicans created against it. As of now, Republicans have decided they won't do anything to reinstate these popular elements. Even if they change their minds, they'll be relentlessly attacked by the even further Right.
But polls like this show what President Obama is going to have to do politically if the law is overturned. He's going to have to run against the activist, extremist Republican majority on the Supreme Court and what it has done to overturn these provisions, provisions that even normal (non-elected) Republicans support.

The linguist George Lakoff gives as an example of framing an exercise he gives to his students.

The exercise is: Don't think of an elephant! Whatever you do, do not think of an elephant. I've never found a student who is able to do this. Every word, like elephant, evokes a frame, which can be an image or other kinds of knowledge: Elephants are large, have floppy ears and a trunk, are associated with circuses, and so on. The word is defined relative to that frame. When we negate a frame, we evoke the frame.

So too with the "negative frame" Obamacare that the Republican Tea Party have labeled the Affordable Health Care for America Act. The opposition is not is the parts, but in the part of the label spelled OBAMA!