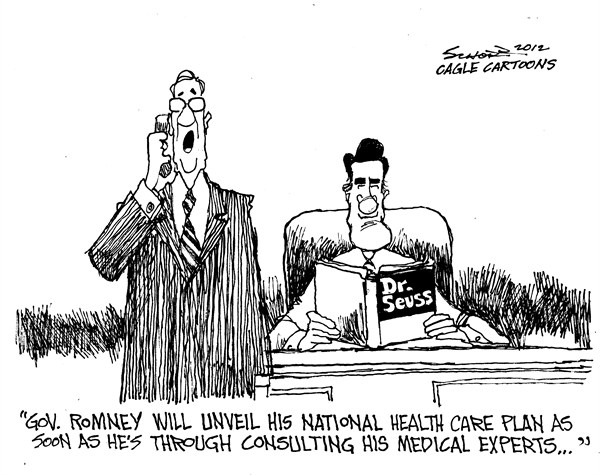 GOP Tea Party politicians and pundits came out swiftly to comment on the Supreme Court's 5 to 4 ruling to uphold The Affordable Health Care for America Act.  The following comments are examples of fear mongering, outright lies, misrepresentations and generally a lack of comprehension regarding the Constitution and the reality of the Act.

"Because really, isn't it pretty difficult to tell the difference between a horrific terrorist attack and a law saying that maybe people with preexisting health conditions ought to be allowed access to our health care system too?"

“Just because a couple people on the Supreme Court declare something to be ‘constitutional’ does not make it so. The whole thing remains unconstitutional."

"President Obama believes he is above the law, entitled to abusing his power to get what he wants, and willing to violate the constitution and the oath he was sworn to uphold. He has proven to be a very dangerous person to have this kind of power, and if he is not stopped this November, I am fearful that the make-up of this country as established by our founders will never be the same."

"What the court id not do on its last day in session, I will do on my first day if elected president of the United States.  And that is I will act to repeal Obamacare."

To set the record straight, Mike Pence's comments were deliberately stoked in fear mongering and misrepresentations.  He eventually apologized.  According to Politico: "at the time he was just in a blind, half-mad rage, and whenever Republicans are mad about something it's exactly like 9/11. Every. Damn. Time."  Pence told POLITICO:


"My remarks at the Republican Conference following the Supreme Court decision were thoughtless. I certainly did not intend to minimize any tragedy our nation has faced and I apologize."

Rand Paul's comments are based in a total lack of understanding of the judicial system  and the precedent regarding the rulings by the Supreme Court.  He is absolutely WRONG!


Rick Santorum's comment is is vitriolic, based on innuendo and fear and completely WRONG. Our government in based on the separation of powers.  The decision of the Supreme Court has no bearing on the President's actions.  He is stoking the fires of fear and ignorance.


Mitt Romney went on to profess the affects of the Affordable Health Act and continue to spew his lies and misrepresentations.  Here are the reasons Mitt wants to repeal the Act and the truth about his statements:

~ “Obamacare adds trillions to our deficit and national debt.” This is total fear-mongering.

~ Romney’s talking points have been debunked numerous times and found false. The CBO finds that the ACA is going to reduce the deficit, not add to it. Furthermore:


The key to this claim is the fact that the health care law does not take $500 billion out of the current Medicare budget. Rather, the bill attempts to slow the program’s future growth, curtailing just over $500 billion in future spending increases over the next 10 years.

Also, it ends the Medicare Advantage program, which cost the government a huge amount of money with few benefits. Likewise, the law doesn’t add “trillions to our deficits.”  By most accounts, the law reduces the deficit over the next decade and works to reduce the overall rate of health care spending by the federal government.

~ Obamacare also means that for up to 20 million Americans, they will lose the insurance they currently have, the insurance that they like and they want to keep. This assertion is a LIE! Under the law, you can maintain your current health insurance if you like it.

~ Along with Romney other politicians including Speaker of the House John Boehner and Rep. Eric Cantor have echoed Romney's talking point that "The president’s health care law is hurting our economy by driving up health costs and making it harder for small businesses to hire. Obamacare is a job-killer. Businesses across the country have been asked what the impact is of Obamacare. Three-quarters of those surveyed by the Chamber of Commerce said Obamacare makes it less likely for them to hire people. This is a bizarre and inaccurate claim.

~ And perhaps most troubling of all, Obamacare puts the federal government between you and your doctor. FALSE  The law would set minimum benefits packages, but medical services will not be government-run, nor does the law allow for rationing of care.

Republicans have retreated from reality and launched an assault of lies instead of facing the truth about the Health Act.


Here are the FACTS about The Affordable Care Act:

Most people only know about three portions of the law that have already gone into effect:

1.  The part that closes the donut hole for prescription drug coverage;
2. The provision that has enabled 2.5 million kids up to the age of 26 to piggy back off their parents’ insurance; and,
3. The part which stops health insurers form denying coverage for children and other people with preexisting conditions.


Little is known about the other parts of the law but click HERE to go through a primer on who may benefit and who will lose if the law is upheld or struck down.

The bottom line is that it is important to have the correct information to understand this Act.  Politicians who use innuendo, misrepresentation and lies based on fear mongering should be held accountable for their inaccurate statements.
Posted by rross at 10:12 PM