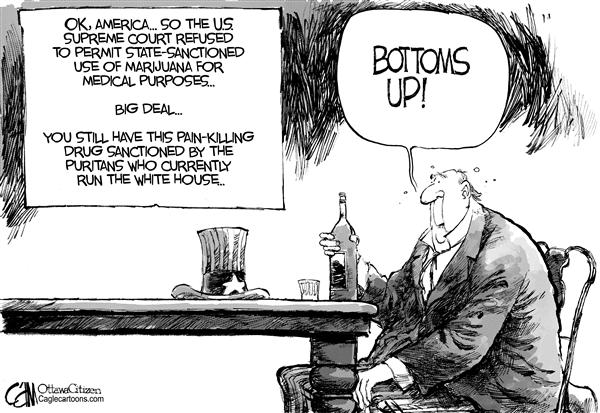 Tony Newman, director for the Drug Policy, has set forth 8 events from 2010 which signify that "we can start finding an exit strategy from America's longest running war"...the Drug War!

Proposition 19, the initiative to control and tax marijuana in California, was arguably the highest profile voter initiative in the nation. It generated thousands of stories in the United States and around the world about the pros and cons of marijuana prohibition. Millions of people for the first time had serious conversations about whether we should continue to arrest and incarcerate people for marijuana or if we should take it out of the illicit market and regulate it. In the end, Prop. 19 received more than 46% of the vote, more votes that GOP Governor Candidate Meg Whitman. The take-away from California is not will marijuana ever be legal, but when.

In August, President Obama signed the Fair Sentencing Act, reforming the draconian disparity between crack and powder cocaine prison sentences. Before the change, a person with just five grams of crack received a mandatory sentence of five years in prison. That same person would have to possess 500 grams of powder cocaine to earn the same punishment. This discrepancy, known as the 100-to-1 ratio, was enacted in the late 1980s and was based on myths about crack cocaine being more dangerous than powder cocaine. Unfortunately, the Democrats made serious comprises to get Republicans to support the Fair Sentencing Act. The original bill that would have completely eliminated the 100-to-1 disparity, but insteadthe compromise reduced the disparity to 18:1. Most troubling was that that the reform was not applied retroactively - which means that none of the tens of thousand of people unfairly languishing in cages will find any relief from the new law. That said, the reform of these laws is the first repeal of a mandatory minimum drug sentence since the 1970s.

For the first time, the media consistently covered the marijuana debate seriously and without the jokes and giggle factor that accompanied stories in the past. For the first time they started including anti-prohibition voices that pointed out that much of the violence in the drug trade is due to prohibition and not the drug itself. There were cover stories in a range of outlets and magazines, including Time Magazine, the Washington Post Magazine, and the Nation. The Associated Press deserves a Pulitzer Prize for its "Impact Series" on the Drug War. Back in May, AP dropped a bombshell on America's longest war and the headline said it all: The US Drug War Has Met None of its Goals. The extensive piece reviewed the last 40 years, starting with President Nixon's official launch of the War on Drugs all the way to President Obama's annual strategy released this year. The piece packed a punch from the start: "After 40 years, the United States' War on Drugs has cost $1 trillion dollars and hundreds of thousands of lives, and for what? Drug use is rampant and violence more brutal and widespread."

A new study, published in November in the British Journal of Criminology, shows that Portugal's decriminalization of drugs in 2001 has led to reductions in student drug use, prison overcrowding, drug related deaths and HIV/ AIDS. In July 2001, Portugal decriminalized the possession of up to ten days' supply of all types of illicit drugs. Before the law went into effect the pro-drug war zealots predicted that the sky would fall and chaos would reign if drug were decriminilazed. Nine years later, the sky hasn't fallen and having drug use addressed as a heath issue instead of a criminal issue has been proven to saves lives and money. Portugal shows us that drugs can be decriminalized in the real world, not only in theory.

While the Social Network movie about Facebook was the number one movie in the country, two former top Facebook executives featured in the film, Dustin Moskovitz and Sean Parker, both became major funders of drug policy reform by donating $50,000 and $100,000 to the California marijuana ballot initiative. The drug policy reform movement has greatly benefitted from the generous support of funders like George Soros, Peter Lewis and John Sperling. Mr. Moskovitz and Mr. Parker can also play a crucial role in supporting the reform movement.

In addition to the debate, coalition building, and public education that Prop. 19 generated, it also led to concrete victories:Governor Schwarzenegger signed into law a bill that will reduce the penalty for marijuana possession from a misdemeanor to a non-arrestable infraction, like a traffic ticket. That's no small matter in a state where arrests for marijuana possession totaled 61,000 last year -- roughly triple the number in 1990. It's widely assumed that the principal reason the governor signed the bill, which had been introduced by a liberal state senator, Mark Leno, was to undermine one of the key arguments in favor of Prop 19.

7) Leaders from Around the World Call for Legalization Debate

Although President Obama and his Drug Czar have repeated said that legalization is not in their vocabulary, the L-word is being talked about like never before among leaders around the world. This year Mexico President Calderoncalled for a debate on drug legalisation to help reduce the bloody war in Mexico. Former Mexico President Vicente Fox has since gone further and called for an end to prohibition. Just last week, United Kingdom's Bob Ainsworth, the former drugs and defense minister, called for the legalisation and regulation of drugs. All of this follows a 2009 report by three former Latin American Presidents, Fernando Henrique Cardoso of Brazil, Cesar Gaviria of Colombia and Ernesto Zedillo of Mexico, where they called the drug war a failure and emphasized the need to "break the taboo" on an open and honest discussion on international drug policy.

Prop. 19 inspired an unprecedented coalition in support of reforming our futile and wasteful marijuana laws. A diverse coalition from across the political spectrum came together to "Just Say No" to failed marijuana prohibition. Law enforcement, including the National Black Police Association and National Latino Officers Association, spoke out in support of Prop. 19. Moms spoke out powerfully for tax and regulate because if is safer for their children than prohibition. The California NAACP and the Latino Voters League endorsed Prop. 19, specifically citing the chilling racial disparities in the enforcement of marijuana laws. Students for Sensible Drug Policy organized on campuses around the state. Finally, organized labor - from the Service Employees International Union to the longshoremen to food to communications workers -- for the first time offered endorsements because controlling and regulating marijuana will mean jobs and revenue that the state currently cedes to criminal cartels and the black market.

There's More Opportunities for Reform than Ever, But the War on Drugs Grinds On

For all the recent progress, drug policy reformers are under no illusion that the drug war will end any time soon. With the Democrats' "shellacking" in November, it is even more unclear how much change will be coming out of Washington in 2011 and beyond. We know that drug prohibition and our harsh drug laws - fueled by a prison-industrial complex that locks up 500,000 of our fellow Americans on drug-related offenses - are poised to continue for some time, wasting tens of billions of dollars and leading to thousands of deaths each year. But we are clearly moving in the right direction, toward a more rational drug policy based on compassion, health, science and human rights. We need people to continue to join the movement to end this unwinnable war. If the people lead, the leaders will follow.

Here's one more event to add to the list: 9) Pat Robertson called for the decriminalization of marijuana.

Its time to work together in 2011 and follow the lead of Portugal in order to bring reality to this serious problem.
Posted by rross at 10:06 AM