Fighting to the Death 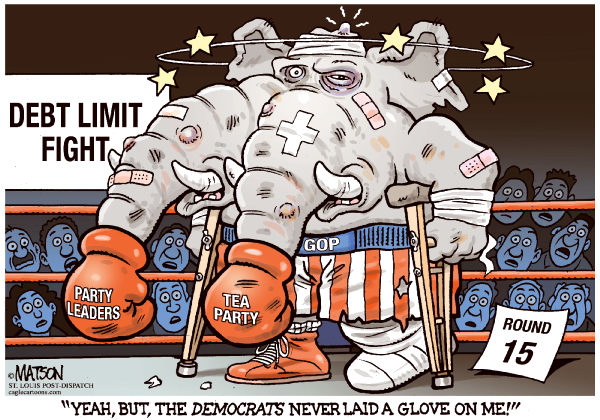 The GOP has been taken over by the Tea Party. News reports claim it is just the new freshman who are holding Congress hostage on issues like the debt crisis. But on closer inspection, there are slime, maggots and vermin under that rock of Democracy. George Zornick at The Nation has a disturbing perspective of "The 'Right-Wing Nutters' Who are Pushing the Country to the Brink."
A Conservative Rebellion

There’s a tense vote count in Washington today as House Speaker John Boehner tries to rally Republican members behind his debt ceiling plan. After one postponement and public disapproval by many prominent House Republicans, Boehner’s plan is teetering on the brink.

The conservative rebellion against Boehner’s plan is being driven by Tea Party activists and many of the freshman members they helped elect. For months, the House Republican leadership has been quietly tutoring these members on the intricacies of the federal budget and the need to raise the debt ceiling, using what Politico called a “stunningly simple” presentation of color-coded charts and graphs. This week, leadership even showed a clip from a Ben Affleck action movie to help persuade the members to act.

But so far, the aggressive pitch doesn’t seem to be working—at one point this week, Boehner was only eight votes from defeat. And if he cannot rally his party to support a dreadful plan with no chance of ultimate passage anyhow, what can he get them to vote for? In the words of British Business Secretary Vince Cable, “The biggest threat to the world financial system comes from a few right-wing nutters in the American Congress.”

That may seem harsh, but only to someone that’s not familiar with the specific Tea Party forces that are whipping conservative members into this rebellion. One group in particular, Let Freedom Ring, has mobilized Tea Party groups across the country and enjoys close connections to incredibly powerful Republican lawmakers. And a quick examination of the group’s history shows that if anything, Cable is being generous.


Let Freedom Ring was founded in 2004 by Colin Hanna, a former state official in Pennsylvania who now enjoys very powerful political connections. He is a part of Grover Norquist’s weekly strategy meeting, and has served as emcee of the Conservative Political Action Conference, a yearly gathering of far-right wingers who like to joke about nuking Chicago or the foreign-born, communist occupant of the White House. WATCH:

In recent months, Let Freedom Ring has made an aggressive pitch for the Cut, Cap, and Balance Act—this is the legislation House Republicans are currently holding out for, contra Boehner’s plan (or any other). The act would immediately cut spending to pre-2008 levels, eventually cap spending at 19.9 percent of Gross Domestic Product, and pass a balanced budget amendment to the constitution. Such dramatic reductions would savage domestic spending programs; Robert Greenstein at the Center for Budget and Policy Priorities said the legislation “stands out as one of the most ideologically extreme pieces of major budget legislation to come before Congress in years, if not decades.” Senate Majority Leader Harry Reid called it “perhaps some of the worst legislation in the history of this country.”

Outside Groups Leading the Charge

The legislation originated in the Republican Study Committee, a group of 175 ultraconservative House members led by Representative Jim Jordan of Ohio. As soon as the RSC drafted the Cut, Cap, and Balance Act, they turned to outside groups and in particular Let Freedom Ring to help promote it. In a Family Research Council interview with Hanna and FRC president Tony Perkins, Jordan explained that “we just went to members of the RSC and said ‘What makes sense?’ And we came back with this cut spending, cap spending, and get a balanced budget amendment to the constitution. And then you all took off with it,” he said, turning to Hanna. “The outside conservative groups, Americans, have taken off with this.”

Jordan added that if the long-shot legislation doesn’t pass, and the federal government hits the debt ceiling, it wouldn’t be such a bad thing. “I’d rather have the crisis now and say ‘let’s deal with it,’ ” Jordan said. “Versus making a few changes, raising the debt ceiling, and having the crisis in two or three years…. virtually every economist—there’s a consensus out there saying we will have a debt crisis in two to three years.”

Soon after the legislation was unveiled, Let Freedom Ring organized a coalition of over 100 conservative groups, including Americans for Prosperity, Club for Growth, Freedom Works, Tea Party Express, and local Tea Party chapters from coast to coast.

Then Let Freedom Ring and its coalition led the charge. They created a website, cutcapbalanceact.com, which has a pledge asking lawmakers to support the legislation—so far, every major GOP presidential candidate except Jon Huntsman has signed it, along with twelve senators and thirty-nine House members. Over 240,000 people have also pledged to push their elected representatives to support Cut, Cap, and Balance, which already has forty co-sponsors in the Senate and 115 in the House.

The group had a news conference on Capitol Hill in June, featuring Hanna, Jordan, Senators Lindsey Graham, Jim DeMint, Orrin Hatch, Mike Lee and Rand Paul along with Representatives Joe Walsh and Ron Paul, and others. “This is beyond partisanship; this is beyond ideology. This is truly about survival,” Hanna told the assembled reporters.

The Power of Outside Groups over the GOP

This week, when Boehner rolled out his latest debt ceiling proposal, the coalition led by Let Freedom Ring struck a major blow against it the same day. In a statement, the group blasted the proposal and said “falls short of meeting (the coalition’s) principles…. we urge those who have signed the Pledge to oppose it and hold out for a better plan.” Soon after, many conservative House members began publically denouncing Boehner’s bill.

This level of influence is impressive for a group that formed only seven years ago. In 2004, Hanna got $1 million from the reclusive conservative financier John Templeton to start Let Freedom Ring. Hanna had gained some national notoriety while commissioner of Chester County, PA, when he refused to remove a Ten Commandments plaque from the county courthouse, and Let Freedom Ring aimed to get evangelical voters to the polls that fall in support of George W. Bush.

At the time, the Wall Street Journal said the group was “attracting wealthy Christians who don’t want to be seen as political.” Hanna said the group would have “a positive political philosophy based upon respect for Constitutional principles, economic freedom and traditional values…. Let Freedom Ring will not engage in negative personal or partisan political attacks.”

That pledge didn’t last long. In 2005, the group aired controversial ads on national television advocating for a border fence with Mexico, where the narrator claims “illegal immigration from Mexico provides easy cover for terrorists” as slow-motion footage of a plane crashing into the World Trade Center plays on screen.

In the 2008 presidential campaign, positivity really went out the window. As the election approached, Hanna sent missives to his large membership base charging that Obama would “appease worldwide Jihadism” and “[transform] America into a country we might not recognize within just 4 to 6 years.”

Let Freedom Ring created smear ads against Obama which channeled virtually every right-wing theory about the Democratic candidate. One ad, “Puzzle,” showed images of Jeremiah Wright (a “radical and [a] racist”), William Ayres, Tony Rezko, Louis Farrakhan, Iran, Fannie Mae and Freddie Mac, and ACORN—all in sixty-one seconds. The ads were praised by Fox News because they “did something that John McCain’s camp has still not done: create a negative ad that challenged Barack Obama’s credibility.”

Hanna was also busted by NBC News conducting a push poll in Pennsylvania only days before the election, in which voters were asked if “knowing that the former head of Fannie Mae made millions of dollars while working there and worked on the Obama campaign" would make them less likely to vote Democratic.

After Obama was elected, Hanna helped push the idea that Obama wasn’t born in the United States. In an MSNBC interview, Hanna said “Obama and those supporters around him have not answered perfectly simple and straightforward questions that would have put this to rest long ago. Where is the proper documentation?”

Let Freedom Ring was instrumental in putting together the Tea Party and 9/12 rallies in 2009, and last year the group released a photography book of signs from the protests called Grandma’s Not Shovel-Ready. In the foreword, Hanna wrote that “it is our hope that these signs will give you strength, encouragement and an occasional chuckle in these challenging times. This book proves that in America, the spirit of freedom still lives!”

The book featured signs labeling “Comrade Obama” as “World’s #1 Crypto-Marxist,” and an “undocumented worker.” The book also flirted with revolution and overthrowing the government. “Oust the Marxist Usurper! Honduras did it!” read one sign.

Why is this Vitriol and Dirty Politics accepted as Normal by the Mainstream Media?

This type of Tea Party vitriol and dirty politics is unfortunately standard fare, accepted long ago by mainstream journalists as part of the political game. But it’s long past time to question how an organization that puts out a book like Grandma’s Not Shovel-Ready can also be a major power player in a debate that has the country five days from financial catastrophe.

The debt ceiling issue is just the crisis du jour that the 'Right-Wing Nutters' will use to advance their racist, vitriolic, mean-spirited, untruthful, fear-gripping, slime throwing agenda. This country needs to clean out the slime from under the rock.

In an episode of the Daily Show from 2007 Colin Hanna was interviewed by John Oliver on the issue of making English the official language in the US. It does show the mindset of the man. WATCH: 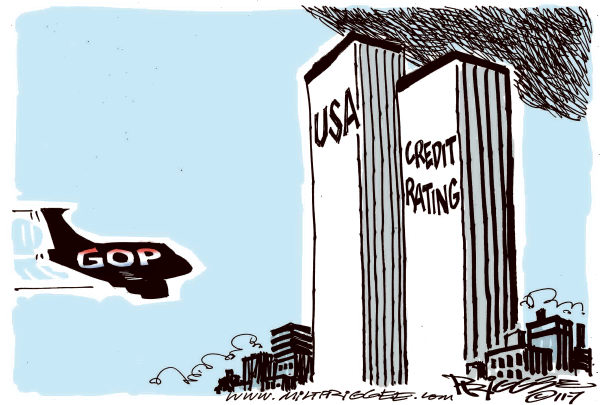