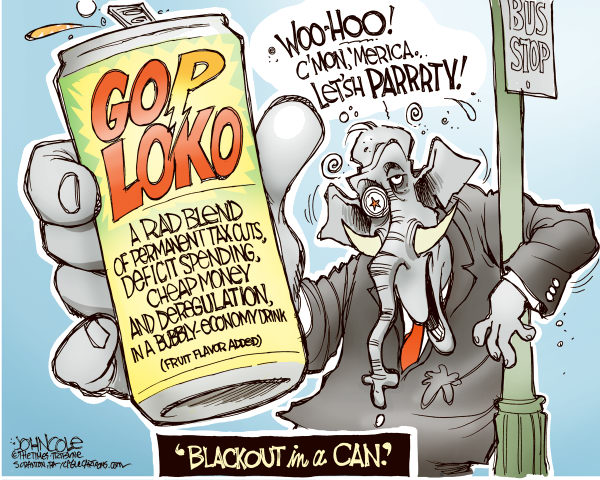 In 1996, President Bill Clinton developed his triangulation style of governing. He would position himself, not to the 'left' or to the 'right' of an issue but smack dab in the middle. Of course, this Clintonian strategy was really the brain-child of the famously issue shifting pundit, Dick Morris. This approach allowed Clinton to work with mainstream Republicans while separating himself from traditional Democratic ideas. They saw it as a political win-win situation.

Truth be told, it was a huge win for the Republicans, big business, mega-corporation, bankers and Wall St. Of course, it was also a big win for Clinton who won over Republican voters by adopting Republican positions and theories. The down side was for the American people, the worker, the middle class, the poor, the environment and the principles of the Democratic Party.

In the end, triangulation led to the ratification in whole of the Bretton Woods Agreement in 1994 which opened the door for NAFTA in 1994. Clinton also signed into law the 1996 Telecommunication Act and the 1999 Gramm–Leach–Bliley Act which repealed the provisions of the Glass–Steagall Act of 1933.
So why is this important today? Thom Hartmann, radio show host and author has published a book titled, Unequal Protection: How Corporations became 'People' -and How You Can Fight Back. In an excerpt from his book, Hartmann shows the historical aspects of today's politics and the importance of these events.

This same weekend that opened July 1944, a three-week meeting was convened in an isolated hotel in New Hampshire’s White Mountains near the town of Bretton Woods. Bankers, economists, and representatives of the governments of forty-four nations arrived for the meeting, which was convened as the International Monetary and Financial Conference of the United and Associated Nations.

The official history of the meeting suggests it was a group of nations getting together to work out a new international economic world order that would prevent a repeat of the Great Depressions and the European inflations that had occurred in the 1930s and driven Hitler to prominence and power with his promises to “restore Germany to greatness.”

Four years earlier, in November 1940, the German minister of finance, Walther Funk, had suggested a “New Order” for the world’s finances and banking that would be dominated by Germany. Partly in response to this, in 1942 John Maynard Keynes had begun to create a plan for an International Clearing Union, which formed part of the eventual basis of the Bretton Woods discussions.

According to Raymond F. Mikesell, who was present at the meetings, on the night of December 13, 1941, the U.S. secretary of the treasury, Henry Morganthau, “dreamed about an international currency” and the next morning called his undersecretary, Harry Dexter White, to ask him to write up a paper on how it could be brought to pass.

“Two weeks later,” Mikesell wrote, “White responded with a general out- line of an International Stabilization Fund (ISF) and a (World) Bank.”

During these three weeks and in subsequent meetings, the attendees hammered out the Bretton Woods Agreement, which created the International Monetary Fund (IMF) and the World Bank and laid early foundations for the General Agreement on Tariffs and Trade (GATT), which gave birth to the World Trade Organization (WTO). The group selected as the first U.S. executive director of the IMF the lead U.S. representative to the meeting and then–U.S. undersecretary of the treasury, Harry Dexter White.

The Bretton Woods Agreement wasn’t ratified in whole by the United States until Bill Clinton’s administration roughly fifty years later. And the near- immediate result of that would be hundreds of thousands of dead dolphins— along with the loss of as many as 20 million American manufacturing jobs. [...]

The U.S. Constitution specifically states that the president “shall have Power, by and with the Advice and Consent of the Senate, to make Treaties, provided two thirds of the Senators present concur.” That two-thirds-of-the-senators requirement, however, made for a slow and contentious process, particularly when it came to issues that could affect American jobs.[...]

Each president from Richard Nixon to Bush Sr. pushed to get this “fast- track authority” for himself. Bush Sr. pushed for ratification of the GATT agreement but was unsuccessful.

But Bill Clinton, in the final days of his first four-year term, joined with Senate leader Bob Dole to use political pressure, fast-track procedures, and careful timing (just before the Christmas recess) to bring the GATT agreement to pass.

Thus, after much lobbying and giving out of substantial campaign contributions by multinational business interests and a Senate vote to invoke cloture—a procedure that allowed only thirty hours of congressional debate and forbade amendments—the final parts of the Bretton Woods Agreement and its offspring were ratified in November 1994, just as Congress was hurrying to head home for the holidays. Most of the members of Congress didn’t read the document they voted on, but it became the law of the land in any case. One month later the now-fully-empowered GATT gave birth to the World Trade Organization. [...]

The Role of NAFTA and GATT/WTO

The biggest hit on the average family in the developed world has been the result of changes in how international trade is regulated. While Ross Perot stepped up to the podium during the presidential campaign and warned about “giant sucking sounds” from the south, both Bill Clinton and George Bush Sr. supported the U.S. ratification of the North American Free Trade Agreement (NAFTA), both saying that it would produce at least 170,000 new jobs.

NAFTA did, in fact, create that many new jobs and more—in Mexico. But in the United States, more than 420,000 jobs vanished by 1996 as a result of NAFTA, and over $28 billion in business was lost to U.S.-based workers. When job losses because of other international trade deals and the resultant U.S. trade deficit are factored in, more than 20 million U.S. manufacturing jobs have disappeared since the 1970s, most of them year-round and full-time, although many have been replaced by part-time or low-pay service-sector jobs, thus the “net loss” of “only” 420,000 jobs.

Let's not forget that it was the Bretton Woods Agreement, which created the International Monetary Fund (IMF) and the World Bank and laid early foundations for the General Agreement on Tariffs and Trade (GATT), which gave birth to the World Trade Organization (WTO).

WATCH Hartmann explain the impact today of the WTO on the American society.

Hartmann discusses the devastating effects of the Bretton Woods Agreement and NAFTA on the U.S. economy and politics. Remember that most of this legislation was based on the Republican, conservative theory that deregulation is good for competition. However, a review of the legislation that was passed under President Bill Clinton shows just the opposite.

The stated intent of the 1996 Telecommunication Act was to promote competition and the public interest by opening up markets to competition by removing regulatory barriers. In reality, the effect has been just the opposite.

In 2005, Common Cause issue a report on an analysis of the Act.

This study tells the story of the Telecommunications Act of 1996 and its aftermath. In many ways, the Telecom Act failed to serve the public and did not deliver on its promise of more competition, more diversity, lower prices, more jobs and a booming economy.

Instead, the public got more media concentration, less diversity, and higher prices.

Industries supporting the new legislation predicted it would add 1.5 million jobs and boost the economy by $2 trillion. By 2003, however, telecommunications’ companies’ market value had fallen by about $2 trillion, and they had shed half a million jobs.

And study after study has documented that profit-driven media conglomerates are investing less in news and information, and that local news in particular is failing to provide viewers with the information they need to participate in their democracy.

Why did this happen? In some cases, industries agreed to the terms of the Act and then went to court to block them. By leaving regulatory discretion to the Federal Communications Commission, the Act gave the FCC the power to issue rules that often sabotaged the intent of Congress. Control of the House passed from Democrats to Republicans, more sympathetic to corporate arguments for deregulation. And while corporate special interests all had a seat at the table when this bill was being negotiated, the public did not. Nor were average citizens even aware of this legislation’s great impact on how they got their entertainment and information, and whether it would foster or discourage diversity of viewpoints and a marketplace of ideas, crucial to democratic discourse.

The Glass-Steagall Act distinguished types of banks and separated them by the type of business, such as, commercial and investment banking. Another aspect of the Act was that it founded the Federal Deposit Insurance Corporation (FDIC) for insuring bank deposits. By repealing the GSA, restrictions against merging commercial and investment banking were lifted. Furthermore, the Gramm-Leach-Bliley Act allowed banking institutions to provide a broader range of services, including underwriting and other dealing activities.

In 1933, in the wake of the 1929 stock market crash and during a nationwide commercial bank failure and the Great Depression, two members of Congress put their names on what is known today as the Glass-Steagall Act (GSA). This act separated investment and commercial banking activities. At the time, "improper banking activity", or what was considered overzealous commercial bank involvement in stock market investment, was deemed the main culprit of the financial crash. According to that reasoning, commercial banks took on too much risk with depositors' money. Additional and sometimes non-related explanations for the Great Depression evolved over the years, and many questioned whether the GSA hindered the establishment of financial services firms that can equally compete against each other.

There are many who blame the repeal of GSA for the monetary problems today. Of course legislation which was passed after GLB also played a part in the financial crisis. The 2000 Commodity Futures and Modernization Act also exempted credit default swaps from regulation and was signed by President Clinton.

WATCH a video on the cause and effect of repealing the Glass-Steagall Act.

Here's a video of former President Bill Clinton responding to a question about his role in deregulation. WATCH:

Is deregulation the culprit? If so, then the conservative approach to governing will be more of the same laissez-faire attitude toward corporate and banking behavior. That approach has very negative effects for Americans.
Posted by rross at 1:05 PM