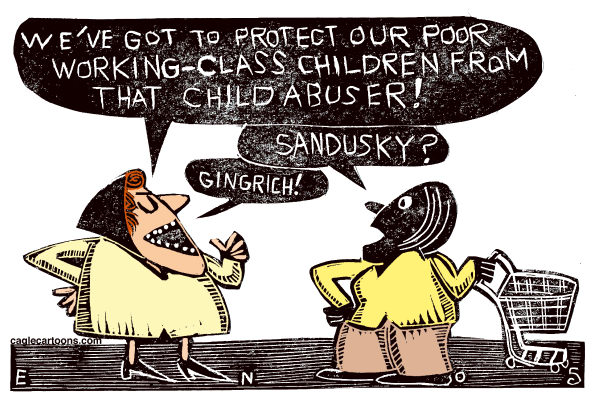 FREEdom Of Speech is a blog by Travon Free who is a stand-up comedian, actor, and writer. He wrote "An Open Letter To Newt Gingrich From A Black Kid Who Grew Up In A Poor Neighborhood" in response to Newt Gingrich's comments about the poor, the black and the kids. It is a must read.

I recently saw you stand up in front of a group of people and allow some of the most idiotic, unfounded, racist, and ignorant words pass your lips that I’ve ever heard from a member of a group of the most unqualified presidential candidates America has ever seen.

To have the audacity to say that poor kids, and let’s be clear that’s republican speak for black and brown kids, “have no habits of working and nobody around them who works” is not only an insult to me as black man who grew up in one of those “really poor” neighborhoods you spoke of, but it’s an insult to my mother. And it’s an insult to many other black, brown and white children, adults, and hard working parents(often single parents) who get up every single day to try to provide a better life for their children in poor neighborhoods.

As a child who grew up in Compton in the early 90′s, one of the most dangerous neighborhoods in America at that time, I watched my mother work tirelessly, sometimes juggling multiple jobs to provide for myself and my sister. Day in and day out like many other parents in poor neighborhoods, she did what she had to do in order to provide for us. You know what that turned into Mr. Gingrich?

A son who received academic and athletic scholarship offers from three Ivy League schools and countless other universities, a son with a college degree in Criminal Justice who graduated with honors from every school he attended, and a daughter who not only attended a Gifted and Talented Education high school, but is one year away from completing a degree at UCLA.

This is not just the case for my family. I know I speak for many other hard working black, brown, and poor white families who have the same experiences in the poor neighborhoods you look down upon from your elitist 1% out of touch pedestal. To say that an entire community “literally has no habit of showing up on Monday” or “they have no habit of staying all day” I say that is a load of shit.

And lastly, you suggest that to remedy this “problem” as you so blindly see it is to make poor kids assistant janitors and pay them to clean the restrooms? Your solution is child labor. Degrading young children by suggesting they clean toilets while painting all union workers as lazy leeches. It’s a shame they don’t have the work ethic of hard working Americans like Kim Kardashian who worked so hard in her sex tape before we crowned her a role model for young girls and showered her with money and adoration or Paris Hilton who was forced to clean so many toilets as a teen to learn “work ethic” before her parents handed over the millions.

This not only echoes the depth of your ignorance, but just how truly unqualified you are to ever be president of this country. Your assumption that poor people have no ingrained work ethic and “have no habit of ‘I do this and you give me cash’ unless it’s illegal” is not only dangerously ignorant but it proves you have no connection with the true heart of this country.

I believe I speak for most if not all of “poor” America when I say Mr. Gingrich you have no habit of performing, thinking or speaking in a manner that warrants becoming the leader of the free world and the 45th president of these United States of America. You represent a party of greedy, selfish, out of touch, wealth protecting, non tax paying, destroyers of the middle class. You know nothing about us. But your words in your
speech in Des Moines told us everything about you.

Which is why I hope you win your party’s nomination. So that poor and impoverished families can at least experience four more years of a man working diligently to help them and the communities they call home that you have proven to know nothing about. president number 44.

PS. You look like someone poured mashed potatoes into a suit

[Update 12/14/11] This is for all the “how is that racist” and “he’s not talking about black people” comments. Click the link in the middle to watch the video(No Flash on WP blogs sucks.) Nobody does it better than Team Stewart.

[Update 12/13/11] First and foremost, thank you all who have read, shared, and commented on this post. I try to respond as often as I can and as soon as I see the comments but cant get to them all due to time spent working on other projects. As a note to future commentators in defense of Newt, please read my response comments below. I also want to acknowledge that I am well aware of the excessive amount of poor white Americans(I mentioned above) and I support your struggle and triumph just as aggressively as that of my own community. However, the reason the letter has a more black/brown focus is because this was a product of directly defending my mother who is a black woman and I grew up around black and brown poor people. Thank you so much for reading!!

Also, the mashed potatoes line is only a joke. I am a stand up comic and I leave a little humor in everything I touch. Consider it a little mental palate cleanser to remove the dirty taste of Newt in your minds!

Newt is nothing but a bully pretending he is your friend.
Posted by rross at 9:23 PM