The Newtster is at it Again! 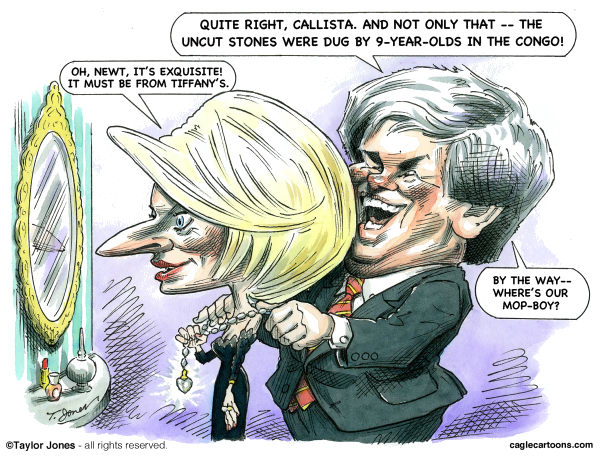 In the news last week, Newt Gingrich said that he believed that kids from poor neighborhoods should work janitorial jobs at school in order to learn a work ethic. The REASON? Gingrich wants to relax our "truly stupid" child labor laws. He wants to do away with union workers, fire janitors and employ children at slave labor wages. Newt has a way of putting his thoughts into succinct statements.

“It is tragic what we do in the poorest neighborhoods, entrapping children in, first of all, child [labor] laws, which are truly stupid,”

"You say to somebody, you shouldn’t go to work before you’re what, 14, 16 years of age, fine. You’re totally poor. You’re in a school that is failing with a teacher that is failing. I’ve tried for years to have a very simple model. Most of these schools ought to get rid of the unionized janitors, have one master janitor and pay local students to take care of the school. The kids would actually do work, they would have cash, they would have pride in the schools, they’d begin the process of rising."

But not to worry, even Gingrich has his limits. When speaking to WNYM radio host Curtis Sliwa, he clarified, “Kids shouldn’t work in coal mines; kids shouldn’t work in heavy industry,” but he still supports having poor school kids scrub toilets in public schools.
Is this a new way of thinking for Gingrich? Absolutely not! In 1994, Newt proposed bringing back orphanages for children on welfare.

In 1994, during the early days of the public debate on welfare reform, Speaker of the House Newt Gingrich ignited a media firestorm by suggesting that orphanages are better for poor children than life with a mother on Aid to Families with Dependent Children (AFDC).

As part of his push for welfare reform, Gingrich proposed that states end aid to poor single mothers and their children be sent to orphanages that would be built with the saved money.

Responding to criticism of the plan by then-first lady Hillary Clinton, Gingrich cites a 1938 Hollywood film and said, “I’d ask her to go to Blockbuster and rent the Mickey Rooney movie about ‘Boys Town.’”

Newt's statements are bold, direct and false. Recently he added a proposal about the food stamp program.

In a speech in Iowa last month, for instance, Gingrich took on the federal Supplemental Nutrition Assistance Program — or food stamps, as it used to be called. The former U.S. House speaker, whom one would assume would know better, said that “people take their food stamp money and use it to go to Hawaii” on vacations. He also said “they give food stamps now to millionaires.”

PolitiFact.com, the fact-checkers at the Tamp Bay Times, looked into Gingrich’s charges and found them false, giving him the “Pants on Fire” rating of its truth meter for being so wrong.

The political pundits seem to agree that with Newt's success in the GOP primary race, Newt will continue to make outrageous, absurd and misinformed statements. 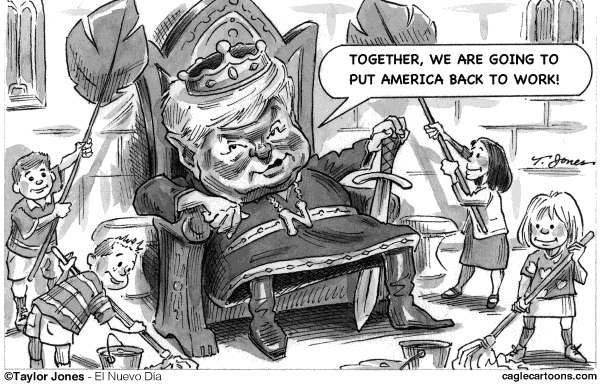 A different view has been espoused by Louis King, president and CEO of Summit Academy OIC, an educational and vocational training center focused on getting jobs for the jobless and under-employed. King believes that, “the best example for kids is to see their parents working” in order to have parents serve as role models. In other words, put their parents to work.

“You can’t have it both ways,” he adds. “You can’t demand people take care of themselves and at the same time not afford equal lending, good education and access to jobs. That is the hypocrisy of both the left and the right.”
Jobs for adults, he repeats, not putting children to work, is the path away from poverty to prosperity. “If I can put one or two people to work feeding their families, that is better than feeding 300 people one time.”