Another Look at Extremist White Guys

Think about it! Since 9/11, hysteria over Muslims has escalated into a frenzy pitch. Steve Benen raises the following query..."If they Weren't White Guys"...

If radical Muslims had carried out terrorist attacks in Kansas and Washington DC over the past five days, we might be trying to pass legislation giving the president the legal authority to place people in preventive detention, and Daniel Pipes would be implying that we need to round up Arab-Americans (correction: Muslims) and put them in relocation camps.

But it was only a couple of old white guys, so our civil liberties remain unthreatened.

Indeed, it's not just the Kansas and DC shootings. Richard Poplawski, a right-wing extremist and white guy, allegedly gunned down three police officers in Pittsburgh in April, in part because he feared the non-existent "Obama gun ban." Jim David Adkisson, a right-wing extremist and white guy, allegedly opened fire in a Unitarian church in Tennessee last year, in part because of his "hatred of the liberal movement."

Imagine if James Von Brunn, Scott Roeder, Poplawski, and Adkisson were all Muslims.

What would the rhetoric be like? What kind of legislation might congressional Republicans offer? How many special reports about the "epidemic" of domestic Muslim violence would Sean Hannity host?

How willing would the public be to give up civil liberties to respond to the attacks? How loud would the laughter be from conservative leaders when liberals warned against racial profiling?

In April, when conservatives first manufactured a controversy surrounding the Department of Homeland Security's reports on potentially violent radicals, a number of far-right groups tried to exploit the "story" for fundraising and activism. Among them was the Liberty Counsel, a right-wing group created by the late Jerry Falwell.

The group created a number of satirical ID cards, available for a modest donation to the group. This one allows the carrier to boast, "I'm proud to be a Right-Wing Extremist." The idea, obviously, was to suggest the federal government was persecuting conservative activists for supporting "the right to bear arms," "lower taxes," "interpreting the Bible literally," and opposing abortion rights.

Of course, in our reality, anyone who's half-way literate could read the DHS report and see that it had nothing to do with the conservative mainstream. But the truth didn't help fill the coffers of far-right activist groups, so ID cards like these were made.

As Limbaugh, Beck, Coulter, and others have proven time and again, there's practically nothing a conservative can do to be "radioactive with mainstream Republicans."

Is there ever a time to boast about being a "right-wing extremist? " Are we afraid of extremist white guys yet? 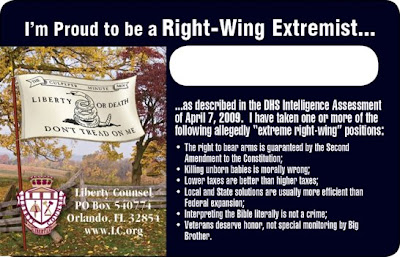 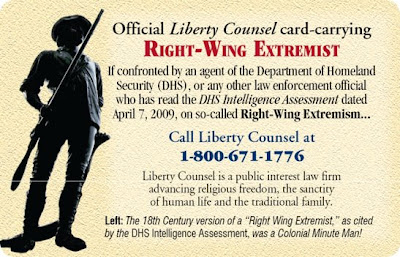