Rigged or Not Rigged... 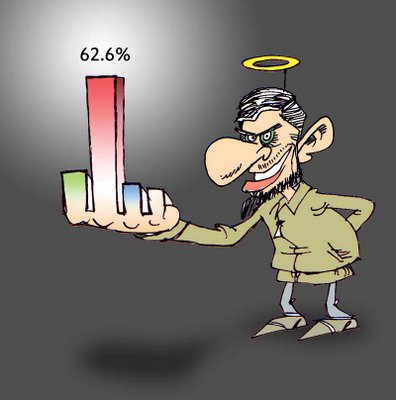 ...that is the question. Below are several opinions on whether the Iranian election was determined by vote fraud or not.

Middle East experts are falling into two broad camps on the Iranian election. One argues that numerous irregularities in voting patterns combined with reports of intimidation, vote buying and other abuses are de facto evidence supporting claims that a presidential coup has taken place in Iran. (Read the arguments of Middle East scholars Juan Cole and Stephen Zunes for more details.) A second camp argues caution, suggesting that many in the media had come down with a case of "wishful thinking" that raised expectations of a possible victory by Mir Hossein Mousavi beyond reason, and the gap between the expectations and results is leading to an eagerness to embrace the opposition's claims of massive fraud. (See Middle East scholar Abbas Barzegar's take for more.)

Josh Marshall writes, "going forward I have to imagine that either new facts or simply the momentum of one or other of the narratives will take hold and be the defining one in countries outside Iran," and adds, "I'm eager to see which one it is."

Into that debate, a new statistical analysis of the election results is making the rounds that suggests that the numbers reported by the Interior Ministry are evidence of large-scale vote-fraud, which you can review here.

But respected polling expert Nate Silver of FiveThirtyEight.com, while saying he has "no particular reason to believe the results reported by the Interior Ministry," finds the analysis unpersuasive. Read his post here.