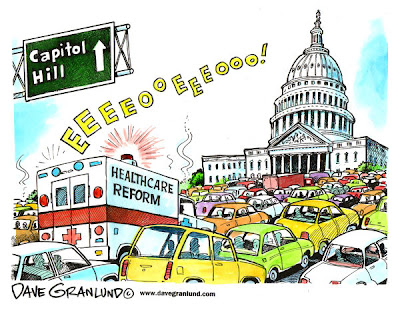 A few thoughts on the Public Health Option:

During his speech in Green Bay, Wisconsin, President Obama reiterated his support for the public health option. “One of the options in the exchange should be a public insurance option — because if the private insurance companies have to compete with a public option, it will keep them honest and help keep prices down,” Obama said.

Republicans have mischaracterized the public option as a “government takeover” of health care.

Karl Rove penned an editorial in the Wall Street Journal attacking the public health care option. Rove’s ‘myths’ echo the poll-tested talking points of Frank Luntz and other conservatives determined to protect the private insurer’s monopoly over coverage and deny Americans choice. Below is a fact-check of Rove’s assertions. [Download a PDF version.]

TRUTH: Insurer and hospital markets are dominated by large insurers and provider systems. Private insurers rarely negotiate with dominant hospital systems and typically pass on the higher costs to beneficiaries in the form of higher premiums. Already, “1 in 6 metropolitan areas in a 2008 study of more than 300 U.S. markets is dominated by a single health insurer that controls at least 70% of consumers enrolled in health maintenance organizations or preferred provider organizations.” Such consolidation negates any real competition. Without it, insurers don’t negotiate prices and boost their profits. In fact, “there have been over 400 health care mergers in the last 10 years,” and premiums have risen “nearly eight times faster than average U.S. incomes.” A public plan could, in an environment of head-to-head competition, push private insurance companies to negotiate more aggressively with providers and dramatically lower health care spending.” [Urban Institute, 10/03/2008; LA Times, 4/09/2009]

TRUTH: Medicare Part D beneficiaries have experienced significant cost increases. According to a recent analysis by the Kaiser Family Foundation shows “significant increases in premiums, costsharing amounts, use of specialty tiers, and utilization management restrictions since 2008 that could have important implications for beneficiaries’ access to needed medications and out-of-pocket expenses.” [KFF, 6/2009]

MYTH 3: A public plan would shift costs to Americans with private insurance: “Second, a public option will undercut private insurers and pass the tab to taxpayers and health providers just as it does in existing government-run programs. For example, Medicare pays hospitals 71% and doctors 81% of what private insurers pay.” [WSJ, 6/11/2009]

TRUTH: Private insurer payments promote medical inefficiency. A new public option will change the way the health care reimbursement system so that we pay for value, not volume and reward efficient providers. According to MedPAC, Medicare rates are adequate and consistent with the efficient delivery of services. In fact, over-payments by private insurers to health-care providers drives up overall costs. “Hospitals which didn’t rely on high payment rates from private insurers ‘are able, in fact, to control their costs and reduce their costs when they need to’ and ‘combine low costs with quality.’” [WSJ, 3/17/2009]

MYTH 4: A public plan will lead to a welfare state:“If Democrats enact a public-option health-insurance program, America is on the way to becoming a European-style welfare state.” [WSJ, 6/11/2009]

TRUTH: Americans will choose a public health insurance plan from a menu of different options. The private insurance market isn’t going anywhere. Private insurers will play an important role in providing more integrated coverage options than the public plan and would retain a “brand advantage” (in the same way that a lot of people rather have the branded drug than the generic) for consumers. Private insurers who “offer a superior product through high levels of efficiency, satisfaction in consumer preferences and ease of access to quality medical services” will thrive in a reformed market. [Urban Institute, 10/03/2008]

MYTH 5: The public option is too expensive: “Fourth, the public option is far too expensive. The cost of Medicare — the purest form of a government-run “public choice” for seniors — will start exceeding its payroll-tax “trust fund” in 2017. The Obama administration estimates its health reforms will cost as much as $1.5 trillion over the next 10 years. It is no coincidence the Obama budget nearly triples the national debt over that same period.” [WSJ, 6/11/2009]

TRUTH: A public option will lower family premiums. If a public plan is “far too expensive” and has higher premiums, then Americans will not enroll. But if a public plan offers lower premiums, it will motivate private insurers to lower their costs. As a result, health care costs would decrease across the board.

MYTH 6: Americans will be forced into a public option: “Government-run health insurance would crater the private insurance market, forcing most Americans onto the government plan.” [WSJ, 6/11/2009]

TRUTH: The government would not force Americans to purchase coverage from the public plan, but Rove would force everyone under 65 to enroll with a private insurer. Rove is essentially arguing that the public plan would work too well. It would use its inherent efficiencies to lower family premiums and force private insurers to aggressively negotiate on behalf of their beneficiaries.

MYTH 7: The public option would put a bureaucrat between you and your doctor: “The public option puts government firmly in the middle of the relationship between patients and their doctors.” [WSJ, 6/11/2009]

Keeping Them Honest
By Paul Krugman

But the devil is in the details. Health reform will fail unless we get serious cost control — and we won’t get that kind of control unless we fundamentally change the way the insurance industry, in particular, behaves. So let me offer Congress two pieces of advice:

2) Don’t trust the insurance industry.
But how can we have fundamental reform of what Mr. Obama calls a “broken system” if the current players stay in place? The answer is supposed to lie in a combination of regulation and competition.
What’s still not settled, however, is whether regulation will be supplemented by competition, in the form of a public plan that Americans can buy into as an alternative to private insurance.

Now nobody is proposing that Americans be forced to get their insurance from the government. The “public option,” if it materializes, will be just that — an option Americans can choose. And the reason for providing this option was clearly laid out in Mr. Obama’s letter: It will give Americans “a better range of choices, make the health care market more competitive, and keep the insurance companies honest.”

Be warned, however. The insurance industry will do everything it can to avoid being held accountable.

At first the insurance lobby’s foot soldiers in Congress tried to shout down the public option with the old slogans: private enterprise good, government bad.

At this point, however, they’re trying to kill the public option in more subtle ways. The most recent ruse is the proposal for a “trigger” — the public option will only become available if private insurers fail to meet certain performance criteria. The idea, of course, is to choose those criteria to ensure that the trigger is never pulled.

The insurance industry contends that a public plan would provide “unfair” competition to the private plans, just as the private Medicare Advantage plans had to be granted large overpayments to counter the “unfair” advantage of the traditional public Medicare program. It is surprising how many others perpetuate this framing that the private insurers should be granted extra tax dollars in order to level the playing field with a more efficient government health financing system. The real unfairness is gifting taxpayer funds to the private insurers.

So what is being proposed as a compromise public insurance option? Let’s have the government set up a private insurance-style PPO, and require it to copy the private sector business model of taking away choice through restricted provider lists, expanding administrative functions including the necessity of marketing its product, competing on benefits and cost-sharing provisions, and engaging in all of the other non-beneficial excesses of the marketplace. Just to be absolutely certain that the public option has all of the flaws of the private health plans, Len Nichols would put up even stronger firewalls between the government administrators and the government’s own public option disguised as a private plan. And this ridiculous effort to “level” the playing field is all for the benefit of… not the patients… but the insurers! Read more »

﻿Four Reasons Why the Public Health Care Option is Irrefutable
By Cenk Uygur, The Young Turks

Politicians who talk about compromising on it have no policy ground to stand on. Without the public option, there is no health care reform.

Here are four indisputable reasons why the public option must be part of the healthcare proposal:

1. The government doesn't have to advertise. No marketing budget means less costs to pass down to the consumer.

2. The government will not take a profit. That is about 10-30% of costs wiped out immediately. Private companies by their nature will add a certain percentage to the product for their own profit. That comes directly out of our pocket. An option that doesn't take profit also doesn't take as much money from us.

3. The government will have enormous negotiating leverage with drug companies and health care providers, so they can drive down the costs to the consumer even more.

4. It is an option! If it turns out that the government option does not work as well or costs more, no problem, just use the private insurance you have now. This is only an option you have in a more competitive market. Who can argue with that?

There are legitimate concerns that progressives have with the public option. It is not single payer. The government does not pick up the tab. You still have to pay a premium and the current system is largely maintained. But I think this is better than single payer. It gives us a choice and allows the market to dictate which system works better in the healthcare industry - public or private. 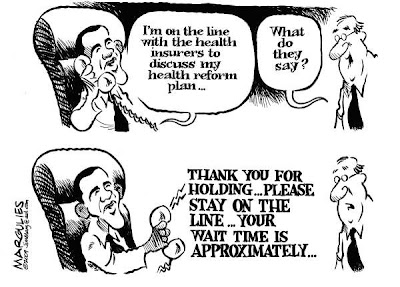 ...please where can I buy a unicorn?

Correctly your article helped me altogether much in my college assignment. Hats incorrect to you enter, choice look forward in the direction of more interdependent articles soon as its sole of my pick subject-matter to read.