Give Your Doctor a Chicken!

The Senate race in Nevada is heating up. Sen. Harry Reid (D) is losing in the polls to the Republic opponent, Sue Lowden. But things might change with Lowden's latest position on health care that she is proposing.

Democrats opened a new round of gleeful attacks as Sue Lowden, the Republican front-runner to unseat Sen. Harry Reid, again extolled the virtues of "bartering" for health care.

Lowden was recently the subject of late-night humor after saying health care costs would be lowered if health consumers paid with cash and bargained down prices with health providers. She called it "bartering," a term normally referring to a trade of one good or service for another.

"You know, before we all started having health care, in the olden days our grandparents, they would bring a chicken to the doctor, they would say I’ll paint your house," she said. "I mean, that’s the old days of what people would do to get health care with your doctors. Doctors are very sympathetic people. I’m not backing down from that system."

The Reid campaign, which has for months focused its attacks on Lowden, sent out a statement with the subject line: "Has Sue Lowden Lost her Mind?"

Lowden, a wealthy casino owner, has occasionally veered off message since the campaign began. The latest slip threatens to make her appear out-of-touch, which is the very attack Republicans had hoped to use against Reid.

Still, Lowden can claim a healthy lead in polls against both Reid and Republican primary opponents.

A question: How many chickens do you bring to the doctor in exchange for a lobotomy? (let alone a quadruple bypass.)

Greg Sargent claims that the Democratic Senatorial Campaign Committee is countering with a new website, "Chickens for Checkups!"

The DSCC’s new Chickens for Checkups Web site — a name that first appeared below on this blog — will allow people to send Lowden a “personalized message asking for her help in finding a doctor for their 19th century illness,” DSCC spox Deirdre Murphy says. It will include a menu of stuff you can choose to barter for treatment.

“You can’t make this stuff up,” Murphy says. “Sue Lowden is completely out of touch with reality if she thinks trading chickens for checkups is smart health care reform.”

There’s little downside in putting up a quick and dirty Website on this kind of stuff, since it doesn’t cost much of anything. Dems want to turn Lowden’s chicken chatter into a symbol of GOP unwillingness to embrace real solutions to people’s problems.

Sue Lowden's campaign isn't backing down. They are claiming that even doctors support chickens for checkups. Lowden’s spokesperson, Chrystal Feldman, sent out this statement: 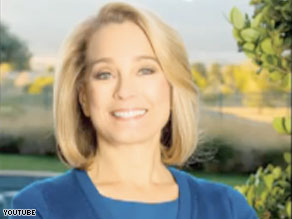 “Americans are struggling to pay for their health care, and in order to afford coverage we must explore all options available to drive costs down. Bartering with your doctor is not a new concept. There have been numerous reports as to how negotiating with your doctor is an option and doctors have gone on the record verifying this.

“Unfortunately, Harry Reid’s failed leadership forces us to take drastic measures. The fact remains that instead of producing a health care solution Americans support, Harry Reid spends his time focusing on attacking his biggest threat to another six years in Washington, Sue Lowden.”

The Lowden campaign sends along this letter to a local paper from a local medical professional, supporting the concept. “I have bartered with patients — for alfalfa hay, a bath tub, yard work and horse shoeing in exchange for my care,” the doc wrote.

Be that as it may, there’s a larger political context here, and Lowden’s tripling down on the idea only ensures that the story keeps on going, potentially turning her into a national punch line.

Comedians are having a hay day with this story.

Now everyone is being silly. Of course you could trade a chicken,but what services those Doctors had to offer were quite different; you were trading a chicken for some leeches,or a mustard plaster,or a splint,or maybe even having a limb sawed off,and being fitted with a peg,or a hook.
For an M.R.I. you might have to trade a Lexus.