Religion and the Media 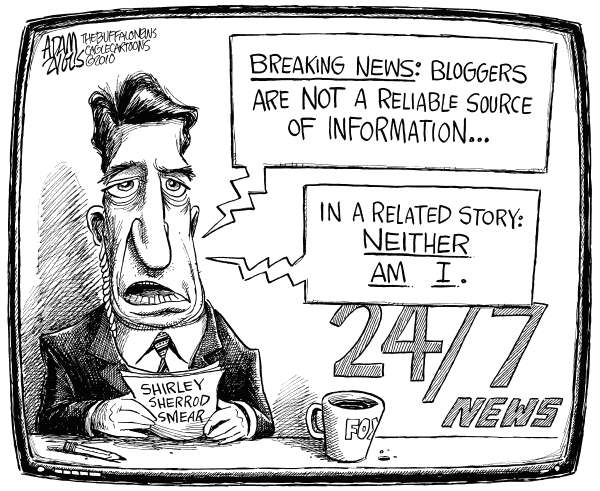 John Cory thinks the so-called "media" is a joke especially when talking about Muslim Madness.

Exhibit A: Chuck Todd told Andrea Mitchell that maybe the "President needs to be seen going to church more publicly." And another man said the same thing to Norah O'Donnell on her program. This was in response to a poll that showed 18 percent of Americans think Obama is a Muslim.

Pundits like Todd think the President should wear his religion on his sleeve so everyone knows he's not "THE OTHER." Why not a yellow Star of David with a Jesus Fish Emblem on his lapel so everyone in the media will recognize him and report honestly? Sorry, didn't mean to be snarky with that "honestly" remark. Yes, I did.

Exhibit B: CNN's John King allowed Franklin Graham to babble uninterrupted, "... He was born a Muslim, and his father gave him an Islamic name ... he has accepted Jesus Christ. That's what he says he has done, I cannot say that he hasn't."

John King mumbled something sage and wise, I'm sure.

I question why the president's religion is an issue at all for pollsters or pundits or the public? It's been awhile since I've read the Constitution, but I recall something about "no religious test shall ever be required as a qualification for any office or position of public trust under the United States."

Let's understand that this is nothing but a cynical ploy by political operatives to tar the president as illegitimate and distract the public from the real issues.

Kind of gives a whole new meaning to "Crazy like a FOX" doesn't it?

Healing the Wound or Pouring on Salt

Maybe the media should look at this in our military. "Onward Christian Soldiers" is no longer just a hymn, but an anthem. How long before Army recruiters ask new troops, "Are you now or have you even been anything other than a Christian?"

The Cordoba House could have been and still could be a powerful healing force for good, an educational tool, and a wonderful symbol of tolerance and inclusion of true American values. It won't happen. If it goes forward, the Cordoba House will become a target of hate-mongers instead of a symbol of peace. It will be defaced and vandalized, and the media will rush to cover the incidents while asking, "Was this a good idea? Should they move somewhere less offensive, say, Tennessee or Kentucky or California?"

You see, you can lead a mob to a tree, but the hanging doesn't count unless the media is there to give context and ask the proper question: "Is It a Dead Body or Just an Ornament? We report - you decide. Keeping them honest."

There was a time when the nightly news was based on professional fact finding. Today, major network news and 24 hour cable channels provide entertainment and sensationalism masquerading as news.

You ought to essentially take into consideration working on creating this weblog into a significant authority on this market. You evidently have a grasp handle of the topics everyone is looking for on this website anyways and you may definitely even earn a buck or two off of some advertisements. I'd discover following current topics and elevating the amount of write ups you place up and I guarantee you’d start seeing some wonderful targeted visitors in the close to future. Just a thought, good luck in whatever you do!