The Tea Party-ization of the Republican Party 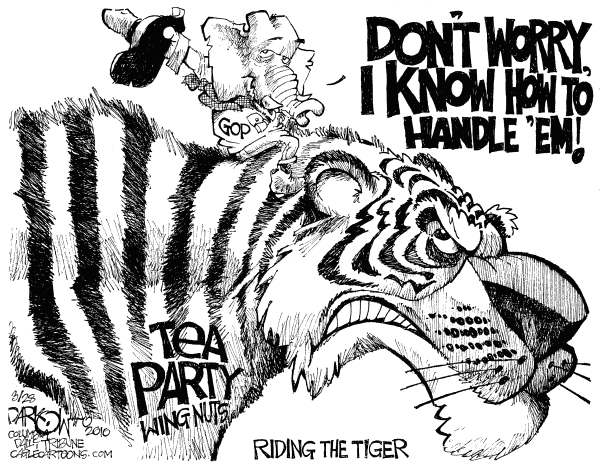 Rep. Bob Inglis (R-SC) had the wrath of the tea party against him and was defeated in the primary runoff for 'supposedly straying from his conservative roots.' David Corn at Mother Jones finds that this "GOP Politician Confirms What Was Long Suspected: Republicans Intentionally Feed the Racism, Anger and Paranoia of the Far Right."

Bob Inglis was ousted by a Tea Party candidate. Here he admits to the GOP strategy to sabotage Obama by exploiting the base fears of the far right.

It was the middle of a tough primary contest, and Rep. Bob Inglis (R-S.C.) had convened a small meeting with donors who had contributed thousands of dollars to his previous campaigns. But this year, as Inglis faced a challenge from tea party-backed Republican candidates claiming Inglis wasn't sufficiently conservative, these donors hadn't ponied up. Inglis' task: Get them back on the team. "They were upset with me," Inglis recalls. "They are all Glenn Beck watchers." About 90 minutes into the meeting, as he remembers it, "They say, 'Bob, what don't you get? Barack Obama is a socialist, communist Marxist who wants to destroy the American economy so he can take over as dictator. Health care is part of that. And he wants to open up the Mexican border and turn [the US] into a Muslim nation.'" Inglis didn't know how to respond.

As he tells this story, the veteran lawmaker is sitting in his congressional office, which he will have to vacate in a few months. On June 22, he was defeated in the primary runoff by Spartanburg County 7th Circuit Solicitor Trey Gowdy, who had assailed Inglis for supposedly straying from his conservative roots, pointing to his vote for the bank bailout and against George W. Bush's surge in Iraq. Inglis, who served six years in Congress during the 1990s as a conservative firebrand before being reelected to the House in 2004, had also ticked off right-wingers in the state's 4th Congressional District by urging tea-party activists to "turn Glenn Beck off" and by calling on Rep. Joe Wilson (R-S.C.) to apologize for shouting "You lie!" at Obama during the president's State of the Union address. For this, Inglis, who boasts (literally) a 93 percent lifetime rating from the American Conservative Union, received the wrath of the tea party, losing to Gowdy 71 to 29 percent. In the weeks since, Inglis has criticized Republican House leaders for acquiescing to a poisonous, tea party-driven "demagoguery" that he believes will undermine the GOP's long-term credibility. And he's freely recounting his frustrating interactions with tea party types, while noting that Republican leaders are pushing rhetoric tainted with racism, that conservative activists are dabbling in anti-Semitic conspiracy theory nonsense, and that Sarah Palin celebrates ignorance. [...]

For Inglis, this is the crux of the dilemma: Republican members of Congress know "deep down" that they need to deliver conservative solutions like his tax swap. Yet, he adds, "We're being driven as herd by these hot microphones -- which are like flame throwers -- that are causing people to run with fear and panic, and Republican members of Congress are afraid of being run over by that stampeding crowd." Inglis says that it's hard for Republicans in Congress to "summon the courage" to say no to Beck, Limbaugh, and the tea party wing. "When we start just delivering rhetoric and more misinformation...we're failing the conservative movement," he says. "We're failing the country." Yet, he notes, Boehner and House minority whip Eric Cantor have one primary strategic calculation: Play to the tea party crowd. "It's a dangerous strategy," he contends, "to build conservatism on information and policies that are not credible."

Asked if there are any 2012 GOP contenders who can lead the party in a more credible direction, Inglis points to Rob Portman, a former House member who was President George W. Bush's budget director. But Portman is now running for Senate in Ohio. He's not 2012 material. What about Sarah Palin? Inglis pauses for a moment: "I think that there are people who seem to think that ignorance is strength." And he says of her: "If I choose to remain ignorant and uninformed and encourage people to follow me while I celebrate my lack of information," that's not responsible. [...]

Inglis is a casualty of the tea party-ization of the Republican Party. Given the decisive vote against him in June, it's clear he was wiped out by a political wave that he could do little to thwart. "Emotionally, I should be all right with this," he says. And when he thinks about what lies ahead for his party and GOP House leaders, he can't help but chuckle. With Boehner and others chasing after the tea party, he says, "that's going to be the dog that catches the car." He quickly adds: "And the Democrats, if they go into the minority, are going to have an enjoyable couple of years watching that dog deal with the car it's caught."