Does Speech Lead to Action? 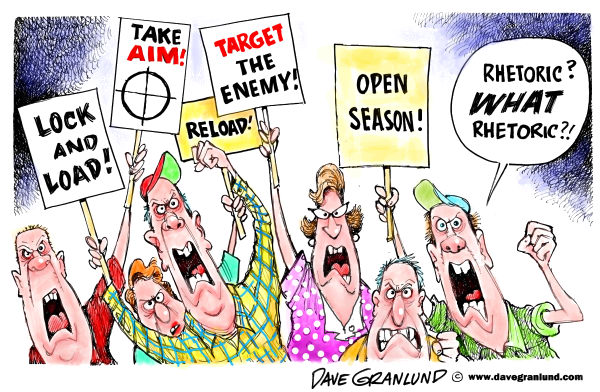 In the attempted murder of Democratic Congresswoman, Gabrielle Giffords [D-AZ] at a rally in Sedona, AZ on January 9, 2011, the 22 year old gunman, Jared Loughner, killed 6 people and wounded 12 others. In the 24 hours that ensued since the incident, there has been much talk about how vitriolic language, negative comments and violent references are the cause or instigator of such behavior.

Comedian Andy Borowitz joked that, “Fox News without violent rhetoric would be like The Weather Channel, without maps.”

On a more serious note, Steve Rendall had suggested in a November, 2010 article in FAIR [Fairness & Accuracy in Reporting], that Fox News is The No. 1 Name in Murder Fantasies.

Bill O'Reilly's recent "joke" about decapitating Washington Post columnist Dana Milbank was only the latest example of a demented Fox News culture that permits on-air personalities to fantasize about assassination and other forms of violence against those deemed enemies of the station, its personalities or their worldview.

During the cable channel's 2008 election coverage, in what she later called an attempt at humor, Fox News contributor Liz Trotta linked Osama bin Laden to Barack Obama as people who both should be assassinated:

And now we have what some are reading as a suggestion that somebody knock off Osama, uh Obama. Well, both, if we could.

A week before Trotta's "joke," Republican primary candidate Mike Huckabee was apologizing for his own Obama assassination quip. Addressing a gathering of the National Rifle Association, Huckabee joked that a loud thud heard backstage during his address was Barack Obama diving to the floor to avoid gun shots. Months later, Huckabee was given his own Fox News show.

It's a culture that apparently filters down to Fox News viewers and supporters. Over the years Fox Nation, the Fox News "owned and operated" fan website, has regularly featured comments expressing the desire to see Barack Obama's assassinated.

Yesterday News Hounds (11/8/10) published a collection of such quotes, some of which can still be read at on the Fox site. Fox Nation purports to be self-policing, to depend on readers to report inappropriate and irresponsible remarks for removal. Apparently presidential assassination fantasies fall short of Fox Nation's standards for inappropriate or irresponsible commentary.

Recent examples of these assassination fantasies on Fox Nation include comments calling for President Obama to "get what Kennedy got," for the CIA to "take this pres down" and a warning to the president that the Koran "ain't thick enough to stop a .308 round."

There is some evidence that Fox's murder fantasy culture has already helped to spark violent action. Reporting for Media Matters, journalist John Hamilton tells the story of Byron Williams, a Beck devotee who engaged in a shootout that injured two California Highway Patrol officers in July. After his apprehension, Williams told police he'd intended to travel Oakland California to kill people at the offices of the Tides Foundation and the ACLU.

In a jailhouse interview in which he described the right-wing media sources that informed his views, Williams returned again and again to Glenn Beck:

Moreover, as the ADL reports, Pittsburgh's Richard Poplawski was so inspired by Beck's anti-government conspiracy theories, he reposted to a neo-Nazi website tape of Beck suggesting the government was building concentration camps for dissidents--before he was arrested after a shootout with police that left three officers dead.

If this all wasn't so deadly serious it would be seriously funny, because O'Reilly has spent years accusing liberal and progressive websites of fomenting hate speech. O'Reilly's crusade largely targets the comment and open forum sections of such websites, highlighting comments that generally pale in comparison to those broadcast on Fox and posted on Fox Nation. To add to the irony, when O'Reilly is called out for failing to make distinctions between the editorial content and comment sections of these websites, he argues that the groups are responsible for everything on their websites:

Open forum is bull.... You can regulate what’s on your website.

When it comes to hypocrisy and Fox News, you really can't make this stuff up.

The hostility behind O'Reilly's creepy Milbank beheading joke was on display when the host appeared to make a veiled threat toward Milbank's boss in an appearance on another Fox show. Apparently angered that Washington Post editorial page editor Fred Hiatt permitted Milbank to publish columns critical of Fox News, O'Reilly had Fox host Megyn Kelly put a picture of Hiatt up on the screen, and told her audience:

This is the editor, Milbank's editor, Fred Hiatt. And Fred won't do anything about Milbank lying in his column. I just want everybody in America to know what the Washington Post has come to. All right, you can take Fred's picture off. Fred, have a nice weekend, buddy.

(Later in the same appearance, O'Reilly suggested that the host join him in physically assaulting Milbank: "I think you and I should go and beat him up.")

O'Reilly's veiled threat toward Hiatt recalls one made in a recent interview with an Australian paper by Fox boss Rupert Murdoch (Australian Financial Review, 11/5/10):

People love Fox News.... We said to the cable operators when we put the price up, we said, do you want a monument to yourself....  Cancel us, you might get your house burnt down.

Perhaps the fish does rot from the head.

The bottom line is that incendiary, vitriolic, negative hate filled rhetoric is leading this country down the wrong path. If these newscasters, news readers, news pundits, new makers, talking heads and moderators, on either side of the issue, cannot keep their comments on the issues rather than sensationalize their words, then they should be fired.

O'Reilly blames the liberal websites for promoting hate speech when he states, "You can regulate what’s on your website." Well, T.V. and radio need to regulate their own stations. Maybe O'Reilly and Beck should be the first to go!

Is Bigfoot Genuine or fake? For more than 4 hundred many years, there happen to be reporting’s of a guy like animal that may be utterly coated in hair.
[url=http://www.is-bigfoot-real.com/]bigfoot sightings[/url]