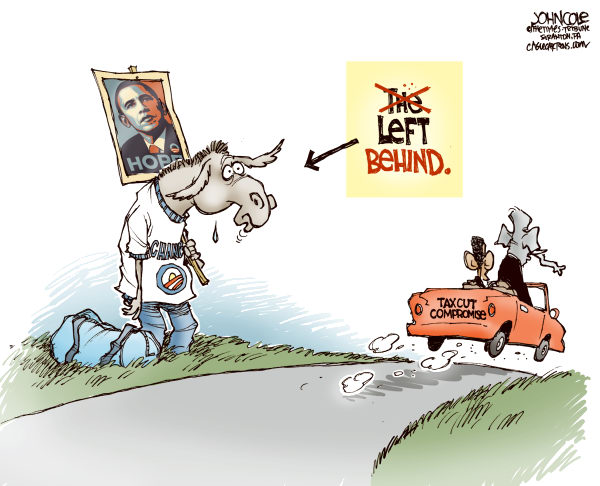 Attention Progressives!! John Cory has, A Liberal Dose of Reality for you.

"It does not require a majority to prevail, but rather an irate, tireless minority keen to set brush fires in people's minds."
- Samuel Adams

So far there is no direct factual connection between the violence in Tucson and the toxic GOP and its subsidiary Tea Party screaming mobs, or the despicable daily spewing of hate-radio or the crazy chalkboard diagrams of the coming end times.

The false equivalency by the right wing and corporate media that the left does it too is merely a deflection intended to distract and shift focus away from them and their tactics. You can't connect the dots, they say.

A drop of ink on porous paper slowly seeps across the sheet. Multiple drops in multiple locations eventually bleed together without any external help. No one has to connect the dots; they connect themselves.

Over the next three decades, vilification of government became a self-replicating meme. Big government fed the cash-driven paranoia machines. Politics got religion with the Moral Majority, which was neither, and Jerry Falwell made a devilish new BFF in Ronald Reagan. The Christian Right was born.

Bogus welfare queens were created from thin air. The dismantling of Unions and the Fairness Doctrine turned news into a product for the corporations, who insisted that they owned the airwaves, not the public. The public good was tossed aside in favor of free-market profiteering without protective regulation.

Money is free speech and some of us have more freedom than others.

With all this madness came Iran-Contra, the Savings and Loan crisis, HUD grant-fixing scandal, the Lobbyist scandals, EPA scandals and more. An estimated 130 Reagan officials were indicted and/or convicted or investigated for misconduct and/or criminal violations. But Reagan was the best president ever says the GOP.

Big government is bad. Small government, small enough to fit in a President's zipper is good. God be praised.

The Great Microphone of Anti-Democracy was created and funded under Reagan and allowed to grow and smear at will over the following decades.

Politics became reality television. The profits of fear made millionaires of the new hate-media puppets, supported extremist think tanks and generated a publishing industry dedicated to the propaganda of self-appointed "real" America; all in the name of the corporate owners of America.

And where has our liberal progressive movement been?

Pointing out their victimhood at the hands of the GOP and how the GOP is mean. Ignoring the elimination of investigative journalism. Scrambling for consultants and pundits to appear on the TV to provide "balance" while agreeing that both sides do it. Gently promoting "objective" media in a world rewarding biased punditry and outright lies.

Woe, is us! It is so unfair. Whatever can we do?

We need to get off our ass and quit pretending the bastardization of corporate media is something new, or that the hateful politics of the right wing cannot be defeated. We need to face reality and stop looking to billionaires and millionaires to fund us or rent us a megaphone to speak to the people.

All of this is obviously more complicated than my simplistic presentation. But I'm a simple guy that believes in the KISS principle. Keep It Simple, Stupid.

And if we think MSBC is the anti-Fox or that it is the liberal platform needed today, then we are just dumb. Snark and shouting and satirical lists are not news reporting or analysis, just tribal entertainment for the converted and like-minded.

No, we need to walk our talk. The other side will call us names no matter what we do, so let us embrace their hatred, as FDR said. Let us be proud radicals and fierce promoters of the common good.

Unions and organizations like the NAACP and La Razza have money that could be used to invest in a non-profit internet/newspaper/broadcast network instead of being spent on lobbying politicians.

Think of it, our own news outlet that conducts investigative reporting and covers real issues. Public subscriptions for print editions and sales of apps for iPad and other devices would provide support money too. Media of, by, and for the people!

Think of putting Robert Parry, Chris Hedges, Sy Hersh, Amy Goodman, Laura Flanders, Glen Greenwald and so many other wonderful voices together in one powerful force of messaging.

We pick a half dozen or so prime issues to promote - issues that overlap compatible areas so as to serve multi-functional roles. Here's a short list off the top of my head:

In an interview on Democracy Now! Slavoj Zizek pointed out, "Did you notice how strange the word 'impossible' functions today? When you talk about private pleasures and technology, everything is possible. But the moment you go to social changes ... practically everything that disturbs the market is impossible ... we will live forever ... whatever you want ... we will travel to the moon - that's all possible. But a small social change of more healthcare is not possible."

If we don't unite and combine our forces, progressives and liberals will drown in the coming corporate GOP takeover of democracy.

George Baer, president of Reading Railroad, spoke for the owners in what became known as the "divine right" letter when he wrote: "... the rights and interests of the laboring man will be protected and cared for - not by the labor agitators, but by the Christian men to whom God in His infinite wisdom has given the control of the property interests of the country."

When the letter became public, support shifted to the miners as the public saw what was headed their way. An informed citizenry is the greatest fear of every corporate driven government.

It took progressives years and years to bring change and enlightenment to workers and politicians alike. People like Ida Tarbell, Eugene Debs, Emma Goldman, Sinclair Lewis, W.E.B. DuBois and so many others all fought and organized and published their cause and the cause of the everyman and the poor and the sick. And it worked; not always in big events, but in small continuous determined steps.

To quote Edward R. Murrow: "We have currently a built-in allergy to unpleasant or disturbing information. Our mass media reflect this. But unless we get up off our fat surpluses and recognize that television in the main is being used to distract, delude, amuse, and insulate us, then television and those who finance it, those who look at it, and those who work at it, may see a totally different picture too late."

An ink drop on porous paper slowly seeps across the sheet. Add another and then another, until at last they bleed together to forge their own image and shape.