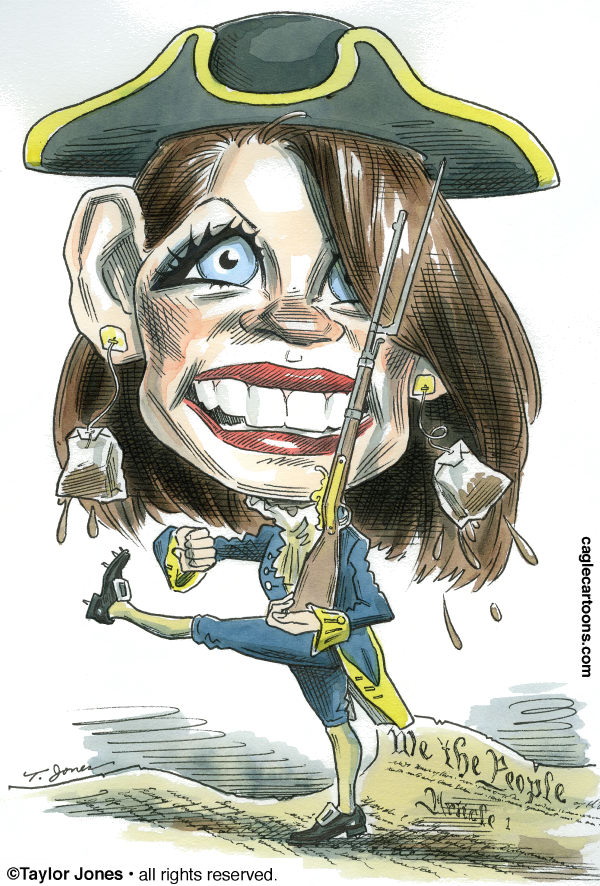 Yasha Levine says that Rep. Michelle Bachmann [R-MN], the anti-government tea-bagger queen, is really a Welfare Queen.....Oh My!!!!
Government handouts in the form of a farming subsidy

Michele Bachmann has become well known for her anti-government tea-bagger antics, protesting health care reform and every other government “handout” as socialism. What her followers probably don’t know is that Rep. Bachmann is, to use that anti-government slur, something of a welfare queen. That’s right, the anti-government insurrectionist has taken more than a quarter-million dollars in government handouts thanks to corrupt farming subsidies she has been collecting for at least a decade.

And she’s not the only one who has been padding her bank account with taxpayer money.

Attempted socialist takeover of America vs. profiting from taxpayer largesse

Bachmann, of Minnesota, has spent much of this year agitating against health care reform, whipping up the so-called tea-baggers with stories of death panels and rationed health care. She has called for a revolution against what she sees as Barack Obama’s attempted socialist takeover of America, saying presidential policy is “reaching down the throat and ripping the guts out of freedom.”

But data compiled from federal records by Environmental Working Group, a nonprofit watchdog that tracks the recipients of agricultural subsidies in the United States, shows that Bachmann has an inner Marxist that is perfectly at ease with profiting from taxpayer largesse. According to the organization’s records, Bachmann’s family farm received $251,973 in federal subsidies between 1995 and 2006. The farm had been managed by Bachmann’s recently deceased father-in-law and took in roughly $20,000 in 2006 and $28,000 in 2005, with the bulk of the subsidies going to dairy and corn. Both dairy and corn are heavily subsidized—or “socialized”—businesses in America (in 2005 alone, Washington spent $4.8 billion propping up corn prices) and are subject to strict government price controls. These subsidies are at the heart of America’s bizarre planned agricultural economy and as far away from Michele Bachmann’s free-market dream world as Cuba’s free medical system. If American farms such as hers were forced to compete in the global free market, they would collapse.

Confused on the issues: She receives a farm subsidy and government medical benefits, but voted NO on foreclosure relief and health care legislation

However, Bachmann doesn’t think other Americans should benefit from such protection and assistance. She voted against every foreclosure relief bill aimed at helping average homeowners (despite the fact that her district had the highest foreclosure rate in Minnesota), saying that bailing out homeowners would be “rewarding the irresponsible while punishing those who have been playing by the rules.” That’s right, the subsidy queen wants the rest of us to be responsible.

Bachmann’s financial disclosure forms indicate that her personal stake in the family farm is worth up to $250,000. They also show that she has been earning income from the farm business, and that the income grew in just a few years from $2,000 to as much as $50,000 for 2008. This has provided her with a second government-subsidized income to go with her job as a government-paid congresswoman who makes $174,000 per year (in addition to having top-notch government medical benefits). “If she has an interest in a farm getting federal subsidy payments, she is benefiting from them,” Sandra Schubert, director of government affairs for the Environmental Working Group, told Gannett News Service in 2007, when the subsidies to Bachmann were first publicly disclosed.

Not the only politician on the public dole

But Bachmann isn’t the only welfare recipient on Capitol Hill. As it turns out, there is a filthy-rich class of absentee farmers—both in and out of Congress—who demand free-market rules by day and collect their government welfare checks in the mail at night, payments that subsidize businesses that otherwise would fail. Over the past couple of decades, welfare for the super-wealthy seems to be the only kind of welfare our society tolerates.

In the 11 years for which the Environmental Working Group has compiled data, the federal government paid out a total of $178 billion to American farmers. We’re not talking about the Joads here. The bulk of subsidies go to the wealthy, not small farmers, as Ken Cook, the group’s president, explained to the Central Valley (Calif.) Business Times:

American taxpayers have been writing farm subsidy checks to wealthy absentee land owners, state prison systems, universities, public corporations, and very large, well-heeled farm business operations without the government so much as asking the beneficiaries if they need our money. ... Even if you live smack in the middle of a big city, type in a ZIP code and you’ll find farm subsidy recipients.

Chuck Grassley, the longtime Republican senator from Iowa who warns his constituents of Obama’s “trend toward socialism,” has seen his family collect $1 million in federal handouts over an 11-year period, with Grassley’s son receiving $699,248 and the senator himself pocketing $238,974. Even Grassley’s grandson is learning to ride through life on training wheels, snagging $5,964 in 2005 and $2,363 in 2006. In the Grassley family they learn early how to enjoy other people’s money.

Sen. Grassley railed against government intervention in the health care market, telling The Washington Times, “Whenever the government does more ... that’s a movement toward socialism.” As the top Republican on the Senate Finance Committee, he ought to know, especially because the government has done more for him and his kin than for Americans struggling with high medical bills and mortgages. Even the free-market think tank the Heritage Foundation criticized Grassley on his deep connections to farming interests and his stubborn lack of transparency.

Then there’s Sen. Sam Brownback, R-Kan., whose family has been on the government take for at least the past 11 years, pocketing some $500,000. The senator recently held a “prayercast” with Michele Bachmann to beseech God to kill health care reform as soon as possible because it would bring an evil socialist spirit into America. Like Bachmann, Brownback has a fierce belief in God, the free market and a two-year limit on all welfare benefits—unless it’s welfare to rich Republicans who don’t need it.

Not surprisingly, Blue Dog Democrats are on board with this welfare-for-the-rich thing. Max Baucus, the fiscally conservative Democratic senator from Montana who did his best to sabotage the health care reform process before it ever began, collected $250,000 in taxpayer subsidies to his family’s farm while fighting to keep Americans at the mercy of free-market health insurance.

Sen. Blanche Lincoln of Arkansas, another Democrat, also helped hold the line against so-called socialized medicine for Americans who need assistance, even though her family farm business follows the socialized subsidy playbook to a T. The Lincolns pocketed $715,000 in farm subsidies over a 10-year period, and the senator even admitted to using $10,000 of it as petty cash in 2007.

Democratic Rep. Stephanie Sandlin of South Dakota stayed true to her conservative free-market roots by voting against the public option. Meanwhile, her daddy, Lars Herseth, a former South Dakota legislator, collected a welfare jackpot of $844,725 paid out between 1995 and 2006.

Profit off taxpayers while denying voters

That’s just the way the game is played these days. Republicans and conservative Democrats bitch and moan about the allegedly Marxist underpinnings of universal health care and do everything they can to deny struggling Americans access to social services. Meanwhile, many of them profit off taxpayers in a massive welfare program.

Farm subsidies have become so corrupt that payments sometimes go to dead people for years. Federal farm subsidies, which were originally meant to help struggling farmers survive, are now little more than taxpayer robbery, taking taxpayer wealth from working Americans and sending it to the have-mores. According to 11 years’ worth of Environmental Working Group data that tracks $200 billion in subsidies, the wealthiest 10 percent of “farmers” have collected 75 percent of the money. That’s exactly the kind of socialism that Rep. Bachmann and her elite ilk like.

This line of thinking falls in with the conservative worldview, of the strict father model as explained by George Lakoff.

The conservative worldview, the strict father model, assumes that the world is dangerous and difficult and that children are born bad and must be made good. The strict father is the moral authority who supports and defends the family, tells his wife what to do, and teaches his kids right from wrong. The only way to do that is through painful discipline - physical punishment that by adulthood will become internal discipline. The good people are the disciplined people. Once grown, the self-reliant, disciplined children are on their own. Those children who remain dependent (who were spoiled, overly willful, or recalcitrant) should be forced to undergo further discipline or be cut free with no support to face the discipline of the outside world.

While, the progressive worldview is modeled on a nurturant parent family. Briefly, it assumes that the world is basically good and can be made better and that one must work toward that. Children are born good; parents can make them better. Nurturing involves empathy, and the responsibility to take care of oneself and others for whom we are responsible. On a larger scale, specific policies follow, such as governmental protection in form of a social safety net and government regulation, universal education (to ensure competence, fairness), civil liberties and equal treatment (fairness and freedom), accountability (derived from trust), public service (from responsibility), open government (from open communication), and the promotion of an economy that benefits all and functions to promote these values, which are traditional progressive values in American politics.

Michelle Bachmann applies the conservative worldview for everyone else but really likes the social safety nets of the government, provided by the progressive worldview, for herself and her family. The motto of the Republican/Tea Party seems to be focused on 'don't do as I do, just do as I say.'