Spinning the Loss in Wisconsin 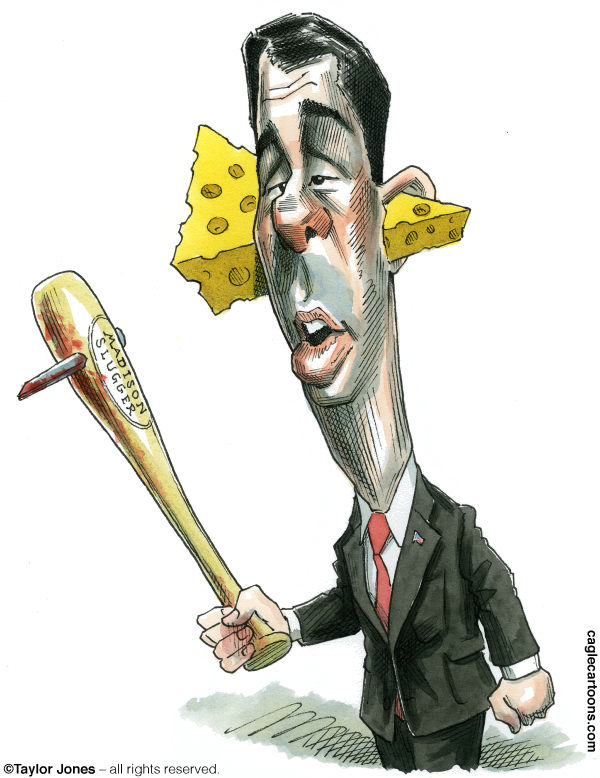 Wisconsin Gov. Scott Walker has an agenda. Wisconsin Supreme Court Justice David Prosser was vocal in his support of Walker and the Governor's measures to bust unions and deny collective bargaining. While the Republicans are trying to claim that their plan for the country is bold, others might be more accurate in calling it extreme or radical. PR Watch found that the win for a liberal judge in the state of Wisconsin has thrown the conservative plan off its track.


While Wisconsin Congressman Paul Ryan prepares to shut down the federal government to prove that government is bad, analysts say the radical agenda of Wisconsin Governor Scott Walker suffered a major set back today as his good friend incumbent Justice David Prosser was defeated for Wisconsin Supreme Court. The AP unofficial vote count, with 100 percent of the precincts reporting, puts challenger Joanne Kloppenburg ahead by slightly more than 200. A recount is doubtless on the way.

In a state that has never unseated a conservative Supreme Court justice, people power fueled a concentrated effort to deny the Imperial Walker one branch of government. Walker’s opponents hope a Kloppenburg victory will swing the Supreme Court in a more independent direction and set the stage for the court to strike down Walker’s controversial collective bargaining law. While the fate of the law is uncertain, Kloppenburg’s three week sprint from dead-in-the-water to victor may give Walker, Ryan and other Wisconsin politicians pause as they rush to radically reshape government to benefit the privatizers and profiteers.

While it may seem odd to many Americans, Wisconsinites like to elect their judges. Although an elected judiciary has its problems (namely, unseemly high-dollar elections), the ballot box sometimes hands citizens a rare opportunity to un-elect judges -- and that is what many Wisconsinites decided to do today. Prosser, a former Republican Assembly Speaker, stumbled when his campaign embraced Walker’s election.

The Kloppenburg victory is stunning. Six weeks ago, sitting Judge David Prosser was a shoo-in and the challenge by Assistant Attorney General Kloppenburg was a snooze fest. But something happened on the way to the high court. A governor, who was elected to create jobs, took office and quickly moved to disenfranchise voters and kneecap unions so they could no longer be a viable force in state elections. The raw power grab sparked a spontaneous uprising, the likes of which this state has never seen, and the Supreme Court race was the next vehicle for people to have their voices heard.

As noted in Salon, this judicial race was very important to Walker in order for him to fulfill his political agenda.

The best evidence of what was at stake in this election, ironically, comes from the Walker camp. The night before the election, Walker's chief counsel, Brian Hagedorn, sent out an email, obtained by the Milwaukee Journal Sentinel, outlining the dire consequences of a Kloppenburg victory.

* The Supreme Court will shift from a 4-3 conservative majority to a 4-3 liberal majority.

* Governor Walker's agenda could be stopped in its tracks by this new activist majority.

* Union bosses and their allies will be emboldened and further push to recall the brave Senators who voted for Governor Walker's budget repair bill.

* (Chief Justice) Shirley Abrahamson and her allies will continue to drag down the reputation of the Court, with an additional vote to further push through their radical agenda."

One could argue about who really has the "radical" agenda in Wisconsin, but the gist of Hagedorn's email shouldn't be in dispute. Walker's opponents will be emboldened. And so will anyone else looking for evidence of what can happen when enough people get out and vote.

Walker is now blaming the liberals in Madison for Prosser's loss.

Gov. Scott Walker (R-WI) reacted Wednesday afternoon to the super-close state Supreme Court race -- in which liberal-backed challenger JoAnne Kloppenburg now leads incumbent conservative Justice David Prosser, thanks to popular reaction against Walker's anti-public employee union legislation. Walker's response: Blame it on Madison -- which he said is in a "very different world" from the majority of the state.

Gov. Scott Walker said this afternoon that the spring election results show there are "two very different worlds in this state."
"You've got a world driven by Madison, and a world driven by everybody else out across the majority of the rest of the state of Wisconsin," Walker said at a press conference in the Capitol.

Of course, the proof is in the numbers that show Prosser's loss was more widespread.

Adding fuel to liberal euphoria, a Democrat also won election to the county executive seat in Milwaukee vacated by Gov. Scott Walker. But perhaps the most important result is the one offering the biggest hint as to what happens next: Kloppenburg decisively trounced Prosser in the district currently represented by Republican state Sen. Dan Kapanke, the first legislator for whom Democrats have accumulated enough signatures to force a recall vote. With one victory -- at least for now -- notched on their belt, Wisconsin's Democrats will be eager for more.

The Republicans claim that they received a mandate from the voters in the last election. However the platform they ran on is not the message that they now claim is bold. The voters in Wisconsin decided to change the course of the Republicans and have embolden the message of the Democrats in this judicial race.
Posted by rross at 4:43 PM