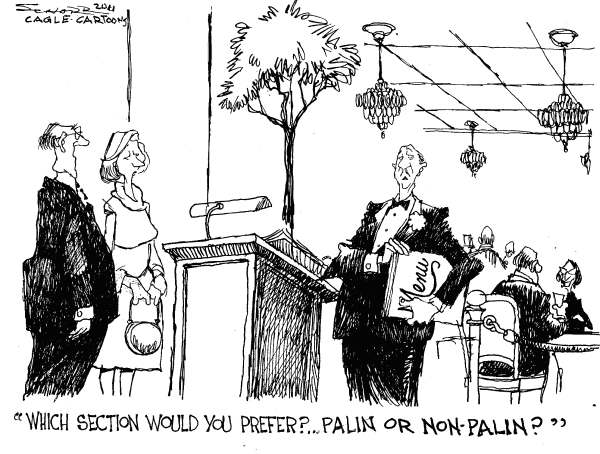 Palin's reality show received a $1.2 million subsidy from the state. Under a state subsidy created by the Legislature in 2008 and signed into law by Palin, Alaska allows film and TV producers to recover 30 percent or more of the money they spend on filming in the state. All told, the Palin show spent $3.6 million in Alaska. This covered almost a third of the show's Alaskan production costs.
Could the fact that Palin took a chunk of taxpayer money to fund her reality TV show come back to bite her if she runs for president next year?

I signed that bill years before I ever imagined I would film a TV series in Alaska, responds Sarah Palin on her Facebook page. And it was the production company, not me, that benefited from the tax break. Besides, Alaska's tax credit program —"an effective way to incentivize a new industry that would diversify our economy" — is indeed consistent with "my position on the proper role of government."

Jim Geraghty at the National Review, doubts that there are many Tea Party leaders who believe governments should "be in the business of subsidizing television programs." Just look at what they're saying about PBS and NPR.

Like Mother, like daughter. Bristol Palin, Sarah Palin’s daughter, joined a teen pregnancy prevention nonprofit called the Candie’s Foundation in 2009. Remember, Bristol became pregnant before being married. However, the Associated Press reported that the Candie’s Foundation released its 2009 tax information, revealing the salary that was paid to Bristol.

But a closer examination of the tax form by ThinkProgress shows that the group disbursed only $35,000 in grants to actual teen pregnancy health and counseling clinics: $25,000 to the Mt. Sinai Adolescent Health Center and $10,000 to the National Campaign to Prevent Teen Pregnancy.

Thus, the nonprofit paid Bristol over seven times what it paid to teen pregnancy prevention groups.

The mom takes government subsidies that she rails against for the poor. The daughter raised money for teen pregnancy prevention but earns more money that the cause she is working for. What lesson will we learn from the Palin's?
Posted by rross at 11:09 PM