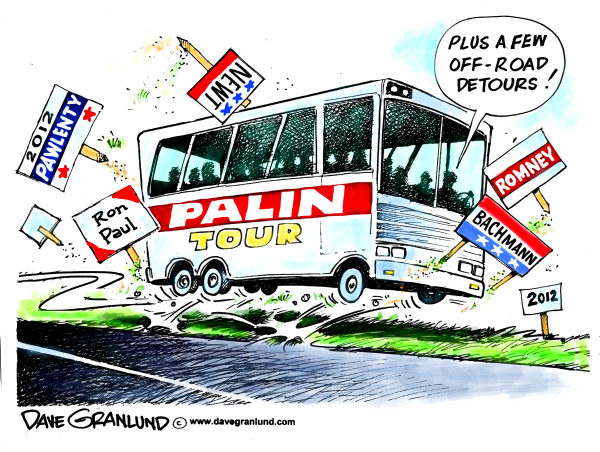 Is Sarah Palin planning on joining the GOP presidential race? This speculation is consuming the media elites.

SarahPAC, the former Alaska governor's political action committee, recently announced that Ms. Palin would tour "historical sites that were key to the formation, survival and growth of the United States of America." The former vice presidential nominee will launch a tour of the East Coast on Sunday.

Her choice of where her tour will be launched has resulted in controversy. It was announced that Palin had accepted an invitation to participate in the annual Rolling Thunder memorial ride. Palin’s decision to participate in the motorcycle rally, which raises awareness of prisoners of war and soldiers missing in action, came as a surprise to some Rolling Thunder officials.

One day after Sarah Palin announced her bus tour, a group sponsoring a Memorial Day weekend event she plans to attend said they never invited her.

On Thursday, the former governor of Alaska and potential GOP presidential candidate announced her bus tour on her political action committee's website, Sarahpac.com. The tour is to begin in Washington, D.C., where Palin plans to participate in the Sunday motorcycle rally sponsored by Rolling Thunder Inc., a group that raises awareness of prisoners of war and those missing in action.

"She's not invited to speak. We're not endorsing her ... (but) we can't stop her from coming to ride, if she wants to ride," Shpak continued.

Anyone can join in on the Rolling Thunder ride. Palin can also ride in the parade. But for her to use this event as a political tool has been shot down by the members of Rolling Thunder.

So will she or won’t she run? Her staff has deflecting questions about a possible run, saying she’s going on the bus tour “because she wants to see how this nation was built and get fired up about that.
Posted by rross at 12:07 PM

I'm really glad I've found this information. Today bloggers publish just about gossips and internet and this is actually annoying. A good site with interesting content, that is what I need. Thank you for keeping this web site, I'll be visiting it. Do you do newsletters? Can't find it. low cost auto insurance texas