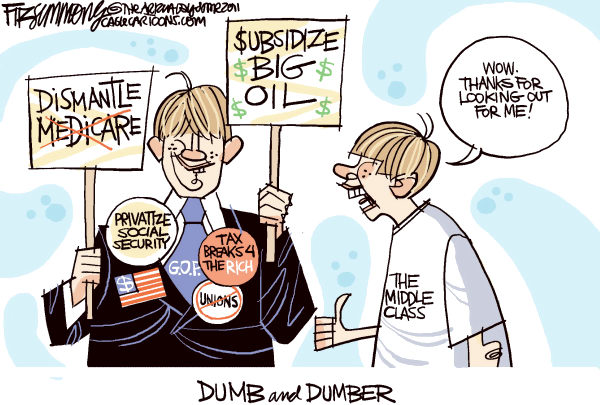 The GOP is ignoring the political analysis of David Frum. Frum is the editor of FrumForum.com which is "dedicated to the modernization and renewal of the Republican party and the conservative movement."

The MinistryOfTruth | Via Daily Kos thinks that:

David Frum sees the writing on the wall.

. . . The big issues of 2012 will be jobs and incomes in a nation still unrecovered from the catastrophe of 2008-2009. What does the GOP have to say to hard-pressed voters? Thus far the answer is: we offer Medicare cuts, Medicaid cuts, and tighter money aimed at raising the external value of the dollar.

No candidate, not even if he or she is born in a log cabin, would be able to sell that message to America’s working class. [Bold text added]

Now, we all know that Reagan's 11th Commandment was "No Republican shall ever attack another Republican", so it makes sense to see the GOP and RW media trying to double down on the disastrously unpopular Paul Ryan plan. They are just going to pretend that this isn't happening. But in reality world, outside of their controlled media environment, people aren't buying the GOP's bullshit on this. Rush can say whatever he wants, Fox can reframe it and Paul Ryan can call his plan "premium care" or "voucher system" or whatever the hell he likes, the voters aren't buying it, and why should they? As Frum admits himself, the real problems are jobs and declining and stagnant wages and incomes, and so far the GOP plan is to cut everything, including our noses off to spite our faces. I think Frum is 100% right. No candidate, not even if they host a reality show or have adonis dna, would be able to sell that message to America's working class.

I think David Frum is one of the very few voices on the right who is smart enough not to believe everything Rush Limbaugh says. Frum can see the tide shifting against the GOP with one of their core constituencies, older voters. Between seniors turning against the GOP, an energized Dem base that is fired up to protect Medicare and recall several already massively unpopular GOP Governor's, and a GOP Presidential field of uninspiring crumudgeons and gaffe prone half wits, what I see is a perfect storm of an electoral ass kicking heading the GOP's way. The best part? The perfect storm of bad things heading the GOP's way is entirely of their own making.

In dissecting the "NY-26 debacle" as Frum puts it, he quotes Henry Olsen of AEI, who Frum calls "as smart a political numbers guy as can be found on the political right." Olsen says of the Ryan Plan to end Medicare so we can give the rich bigger tax breaks . . .

. . . blue-collar voters react differently to issues than the GOP base does. They are more supportive of safety-net programs at the same time as they are strongly opposed to large government programs in general. These voters crave stability and are uncertain of their ability to compete in a globalized economy that values higher education more each year. They are also susceptible to the age-old Democratic argument that the secret Republican agenda is to eviscerate middle-class entitlements to fund tax cuts for the wealthy.

My favorite part of this story? Frum will be totally ignored for breaking Reagan's 11th Commandment and daring to challenge another Conservative. Just as Newt was torched for calling the Ryan plan "right wing social engineering that goes a step too far.", I think Frum will get torched by Rush and the Foxaganda Network and the GOP will continue their self imposed death march towards the fountain of true conservatism. They can't help themselves. They can't appeal to moderates without looking like they are compromising to the fire breathing knuckledraggers in teabaggerstan, and the more they pander to the cruel and heartless far right and the rich special interests who rule their world the harder it will be to win votes outside of the farthest right wing of the political spectrum. Of course, I love the schadenfreude of all of this, because I think the GOP should have zero credibility on jobs after the Bush years, they should have zero credibility on balancing budgets, managing the economy or keeping our country safe as well. The GOP has no credibility, just lots of money and an outstanding propaganda network. If they played moderate and then governed to the far right they can get power and run amok, as they did in 2010 in states like Wisconsin, Ohio and Michigan, but that will not last too long before the middle class figures out that the only thing the GOP of today care about is the not so secret Republican agenda to eviscerate middle-class entitlements in order to fund tax cuts for the wealthy. Good luck running on that message, boys. You see, it's not just GOP Presidential Candidates who suck and are uninspiring, it's their whole message, their every policy screws the little guy and pats the billionaires on their backs. And now the American public is waking up to that fact again.

As David Neiwert at CrooksAndLiars points out . . .

And even after this disaster, their tune will not change one iota. Because they cannot budge from the ideological corner into which they've painted themselves. Ryan's Path to the Poorhouse is not just an economic and social disaster in the making for Americans, it's one that ordinary, common-sense voters can see coming a mile away. Democrats don't have to "demagogue" to make a clear case that it would be disastrous.

So count me in with others who are watching this unfold and cheering on the GOP to double down on being stupid. When David Frum shouts out DO. NOT. SEEK. THE TREASURE. in the movie theater, I am rooting for the GOP to go for it and see how far this "Trade you your Medicare for Tax Cuts for the Rich" plan can take them. If my hopes are correct, Obama will blow these guys out at every level of government in such a way that will make Barry Goldwater's disaster look less threatening than a current GOP presidential nominee.

The GOP agenda is exceptionally generous to rich, powerful and corporate interests but totally devoid of comprehending issues relevant to the middle class and poor. A definite issue for the GOP candidates in the 2012 election.

DO NOT seek the treasure!