Democrats: Do not negotiate with hostage-takers!! 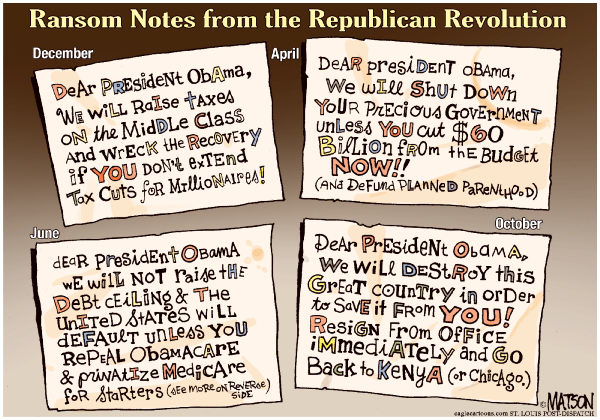 The decision for Democrats is stark but unequivocal. The Republicans are not negotiating. The GOP has boxed its party into a position of, "Do it my way or no way." The path for the Republicans is that they will not support raising the debt ceiling unless big Medicare cuts are part of the deal. That means gutting Medicare.

That also means that the Democrats needs to have guts and say "NO!"

TPM believes that a "Cornered Animal is A Dangerous Animal."

Public polling, the NY-26 outcome, and other objective indicators make it clear Republicans have boxed themselves into a political corner with their plan to end Medicare. It's a big problem for them politically, and there's no easy way out, especially since virtually every Republican in Congress is now on the record, with a vote, that they favor gutting Medicare.

So how are they gonna get out of this jam? Senate Minority Leader Mitch McConnell (R-KY) just made it clear in a briefing with reporters on the Hill: They're going to hold the government's debt limit as hostage in order to back their way out of this political tight spot.

How? McConnell just announced he will not support raising the debt ceiling unless big Medicare cuts are part of the deal. Translation: Unless Democrats get us off the hook by agreeing to deep Medicare cuts (meaning Democrats can no longer attack Republicans for wanting to eliminate Medicare), then we're going to force the federal government into default on its debt.

What if McConnell extracted substantial other cuts from the White House to achieve the GOP's spending cuts goal? No matter, McConnell says. If Medicare cuts aren't part of the deal, then no dice on the debt ceiling -- U.S. economy and world financial system be damned.

It's as stark as that. And the decision for Democrats is equally stark: Do you negotiate with hostage-takers?

McConnell went so far to say that all negotiation is off the table. Medicare cuts must be part of that deal to get his support.

Senate Minority Leader Mitch McConnell (R-KY) says substantial Medicare cuts must be part of a spending and deficit cut package to get his support to raise the debt limit.

In a Capitol briefing with reporters Friday, McConnell declared affirmatively that unspecified Medicare cuts are on the table in bipartisan debt limit negotiations, led by Vice President Joe Biden, and he expects they'll be part of the final deal. But in response to a question from TPM, he went further than he has in the past in laying down a marker on that issue. Medicare cuts must be part of that deal to get his support, he says -- even if negotiators manage to find trillions of dollars in savings elsewhere, even if his other priorities are met.

"To get my vote, for me, it's going to take short term [cuts, via spending caps]... Both medium and long-term, entitlements.," McConnell said. "Medicare will be part of the solution."

To clarify, I asked "[I]f [the Biden group] comes up with big cuts, trillions of dollars worth of cuts, but without substantially addressing Medicare, it won't get your vote?"

The question now is whether Democrats will be on board with this, or whether they'll try to call the GOP's bluff.

"Republicans are holding the United States' credit hostage to ram through their plan to end Medicare. They are now saying they won't accept any plan to reduce the deficit unless it also cuts Medicare. Voters have resoundingly rejected this ideological agenda. Republicans should drop it and move on."

Good response.! Let all Democrat politicians know to stand strong in their response to this Republican nonsense. The GOP debt reduction plan is nothing more than "a smoke screen obscuring a dangerous far-right agenda."

Rep. Paul Ryan, R-Wisconsin, is waging radical class warfare and ideological privatization schemes and selling it as a debt reduction plan. His newly released FY12 budget proposal, The Path to Prosperity, ought to have the subtitle: "A Windfall For the Already Prosperous."

As Dean Baker of the Center for Economic and Policy Research reminds us, the economic policies of the last three decades, by favoring corporations and the wealthy over average Americans, have achieved the world's most breathtaking upward redistribution of wealth. America's richest 1 percent are getting about $1.5 trillion richer each year. Studies also show that the richest 5 percent hold almost 64 percent of our wealth while and the bottom 80 percent of scrape by on just 12.8 percent of the pie.

Yet under the guise of debt reduction, the chairman of the House Budget Committee's budget proposal would take from the already poor, give to the already rich and attempt to achieve debt reduction not by cutting real costs, but by privatizing entitlement programs and shifting costs from the wealthy and corporations to struggling states, seniors, disabled, sick and low-income Americans. And the additional revenues necessary for serious debt reduction is glaringly absent, with proposals that would actually decrease tax-revenue from those most able to pay.

From start to finish, this budget is a smoke screen.

Will Republicans stop at Medicare and Medicaid?

It would devastate lives of the at least 44 million Americans living in poverty by slashing spending on critical human needs to below 2008 funding levels and freezing it there for 5 years. At the same time, it would boost the luxurious lifestyles of the tiny percentage of Americans who are genuinely rich by repealing estate and corporate taxes, slashing the income taxes the wealthiest among us pay and instituting a regressive national sales tax that would most likely increase tax obligations for poor, working-class, and middle-class Americans.

Even though this GOP FY12 Budget Resolution doesn't specify details of a plan to privatize Social Security, stay tuned. Privatizing Social Security is another essential piece of Ryan's (and the GOP's) dangerous agenda.

The GOP 's new mantra is that they have a plan to reduce the budget and the Democrats don't. But there are alternatives to the extreme measures the Republicans are all supporting. One answer is a single-payer Medicare system nation-wide.

Under Ryan's health care schemes, beneficiaries would increasingly bear the burden of soaring costs with no guarantee of receiving the remedies prescribed by their doctors. A better and fairer approach would expand the single-payer Medicare system nation-wide, achieving cost-savings, implementing real cost control and retaining guaranteed healthcare for all Americans.

The GOP is right about one thing: We should be serious about long-term debt reduction. Ryan's dangerous and seriously flawed scheme, however, is nothing more than an ideological ploy to shrink government programs that help poor and middle-class Americans while rewarding the already wealthy.

The moral of the story is: Do not negotiate with hostage-takers!!
Posted by rross at 10:32 AM