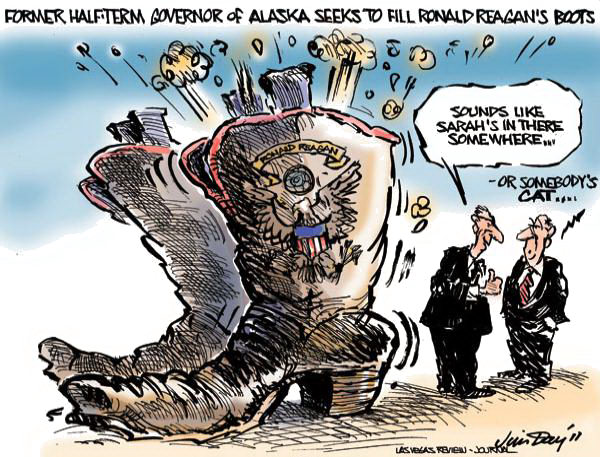 Is it a show of solidarity or a photo opportunity?

You couldn't miss it, the big Star of David hanging around Sarah Palin's neck as she toured the Statue of Liberty and Ellis Island on Wednesday.

NBC New York asked Palin about the significance just as she boarded her bus outside Fox Newschannel to head off to Boston.

"Today is the 44th anniversary of Jerusalem being reunited," she said. "We want to call attention to that."

The pendant is in every photo she took with fans and supporters and can be seen in every sound-bite captured by television crews.

This is not the first time that Palin, a non-Jew, has donned a large Star of David. Of course wearing a Star of David on a chain generally marks the wearer as Jewish. But with Palin, there are other reasons.

So what was the most decidedly not-Jewish Palin doing wearing one in Israel? Not appealing to American Jews -- that's for sure. Most American Jews, being Democrats, can't stand her. And one visit to Israel, a nation many American Jews have mixed feelings toward, anyway, isn't going to change that.

Rather, by wearing the Star of David, Palin was reaching out to American evangelical Christians -- and also being one herself. [emphasis added]

According to David Brog, the (Jewish) executive director of Christians United for Israel, "it is increasingly common" for evangelical Christian supporters of Israel -- who follow a fairly common Israel-centric strain of American biblical interpretation -- to wear Stars of David as symbols of solidarity with the Jewish state

Of course, the last few times Palin wore her large Jewish Star was when the TV cameras were rolling.