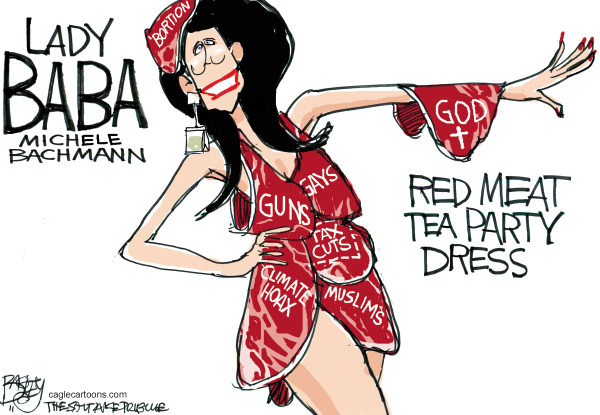 Rep. Michele Bachmann (R-MN) has recently announced that she plans to run for President.  She is a Tea Party politican and the Founder of the House Tea Party Caucus and her ideology is considered radical.

ThinkProgress has assembled 10 of the nuttiest things Bachmann has ever said:


(1) BACHMANN WARNED ‘THE LION KING’ WAS GAY PROPAGANDA: At the November 2004 EdWatch National Education Conference, Bachmann said the “normalization” of homosexuality would lead to “desensitization”: “Very effective way to do this with a bunch of second graders, is take a picture of ‘The Lion King’ for instance, and a teacher might say, ‘Do you know that the music for this movie was written by a gay man?’ The message is: I’m better at what I do, because I’m gay.”
(2) BACHMANN CLAIMED ABOLISHING THE MINIMUM WAGE WOULD CREATE JOBS: While testifying in front of the Minnesota Senate in 2005, Bachmann said, “Literally, if we took away the minimum wage — if conceivably it was gone — we could potentially virtually wipe out unemployment completely because we would be able to offer jobs at whatever level.” This isn’t remotely true. Even simply reducing the minimum wage would, as Paul Krugman noted, “at best do nothing for employment; more likely it would actually be contractionary.”
(3) BACHMANN CLAIMED THAT SCIENTISTS ARE SUPPORTERS OF INTELLIGENT DESIGN: During a 2006 debate, Bachmann said, “There are hundreds and hundreds of scientists, many of them holding Nobel Prizes, who believe in intelligent design.” This was, and is, not true.
(4) BACHMANN CLAIMED TERRI SCHIAVO WAS ‘HEALTHY’: Not long after Terri Schiavo died, Bachmann said she would have voted for the Palm Sunday Compromise because Schiavo “was healthy. She had brain damage — there was brain damage, there was no question. But from a health point of view, she was not terminally ill.” An autopsy found that Schiavo had suffered irreversible brain damage and her brain, said the medical examiner, was “profoundly atrophied.”
(5) BACHMANN LIKENED VISITING IRAQ TO VISITING MALL OF AMERICA: In 2007, Bachmann returned from a junket to Iraq and told her colleagues, “[T]here’s a commonality with the Mall of America, in that it’s on that proportion. There’s marble everywhere. The other thing I remarked about was there is water everywhere.” As ThinkProgress documented at the time, the comparison was preposterous.
(6) BACHMANN CLAIMED THAT CARBON DIOXIDE IS ‘HARMLESS’: In 2008, a Stanford scientist revealed “direct links” between increased levels of carbon dioxide in the atmosphere and “increases in human mortality” — globally, he found that as many as “20,000 air-pollution-related deaths per year per degree Celsius may be due to this greenhouse gas.” The next year, Bachmann, who is not a scientist, said that “carbon dioxide is portrayed as harmful. But there isn’t even one study that can be produced that shows that carbon dioxide is a harmful gas.”
(7) BACHMANN CALLED FOR A CONGRESSIONAL WITCH HUNT: Pivoting off the news of Barack Obama’s alleged relationship to former Weather Underground member William Ayers, and his former pastor, Rev. Jeremiah Wright, Bachmann accused the candidate of having “anti-American views.” She then suggested that Congressional liberals — including Nancy Pelosi and Harry Reid — ought to be subject to “an exposé” by the media because of their views. “I think people would love to see like that,” she told a stunned Chris Matthews.
(8) BACHMANN SUGGESTED GAY SINGER SHOULD REPENT AFTER GETTING CANCER: Bachmann saw Melissa Etheridge’s cancer as a teachable moment: “Unfortunately she is now suffering from breast cancer, so keep her in your prayers,” she said in November 2004. “This may be an opportunity for her now to be open to some spiritual things, now that she is suffering with that physical disease. She is a lesbian.”
(9) BACHMANN BOASTED ABOUT BREAKING THE LAW: In advance of the 2010 national Census, Bachmann told The Washington Times that she would break the law by not completing the forms. “I know for my family, the only question we will be answering is how many people are in our home,” she said. “We won’t be answering any information beyond that, because the Constitution doesn’t require any information beyond that.”
(10) BACHMANN CLAIMED THAT GLENN BECK COULD SOLVE THE DEBT CRISIS: During a February trip to South Carolina, Bachmann told a South Carolina audience, “I think if we give Glenn Beck the numbers, he can solve this [the national debt].”