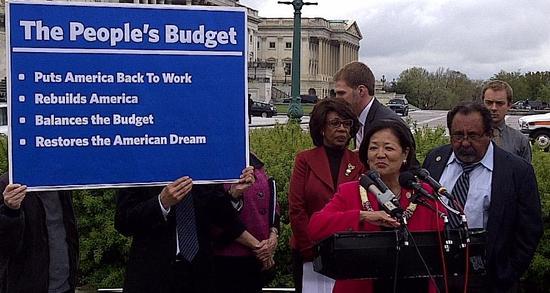 Reps. Maxine Waters, Mazie Hirono (podium) and Raul Grijalva introducing The People's Budget at the Capitol
Politicians like to support their theory's with poll results. If you look at the polls, the public's message is clear: protect Medicare and Social Security, spend less on the military, and raise taxes on the wealthy. And while we're at it, let's tax the Wall Street speculators who wrecked our economy.

If you listen to the pundits and TV commentators, the federal budget problem has a simple solution: cuts, cuts, and more cuts. They cheer politicians for making "tough choices," which usually entails taking money away from schools, stiffing public workers, and telling the poor and the elderly they need to make do with even less. Tough choices, indeed — but for whom?

But if you look at the newspapers or your TV screen, those ideas are rarely, if ever, part of the budget debate. Is there no one in Washington who is sticking up for what the majority of the public wants?

The Congressional Progressive Caucus, which includes 74 House Democrats and Sen. Bernie Sanders, released an alternative budget blueprint back in April. This "People's Budget" would achieve a better balance by taxing the wealthy, reining in runaway military spending, and protecting the New Deal social safety net — just what people tell pollsters that they want

So why is it that the People's Budget isn't being discussed?


There's a good chance you've never heard about this part of the budget debate, though there's been a mountain of media coverage of the budget mess — thousands of articles and television programs. If you've paid attention to any of it, you're probably well acquainted with Rep. Paul Ryan. The Wisconsin Republican has "jet black hair and a touch of Eagle Scout to him," according to one magazine profile. The New York Times told readers about his "piercing blue eyes." It's not just his looks that impress the media. His budget plan, which pairs yet more big tax breaks for the rich with spending cuts for everyone else, is constantly touted as being "bold" and "serious."

And the People's Budget? Well, it's not even mentioned. There were no hard news stories about in the big papers. Washington Post columnist Dana Milbank wrote about the press conference unveiling the People's Budget only to mock it— right down to poking fun at one lawmaker's tie.

Here's a general overview of the People's Budget:

That is a very quick summary, and full details can be read here. The Economic Policy Institute has a full analysis here. At the press conference introducing the budget, economist Jeffrey Sachs praised it as the "only budget that makes sense" and "a lot more serious than everything else on the table." He's also previously written about The People's Budget on the Huffington Post.

The budget debate is locked up in a partisan stalemate. That makes it as good a time as any to tell the people about the People's Budget. Most newspapers and TV networks aren't doing that. And when you look at who stands to gain — and who stands to lose — it's no mystery why corporate-owned media are keeping us in the dark.

The budget mess is covered daily by the media. It is time to let the public know about the People's Budget.

For a discussion and analysis of the People's Budget, WATCH: