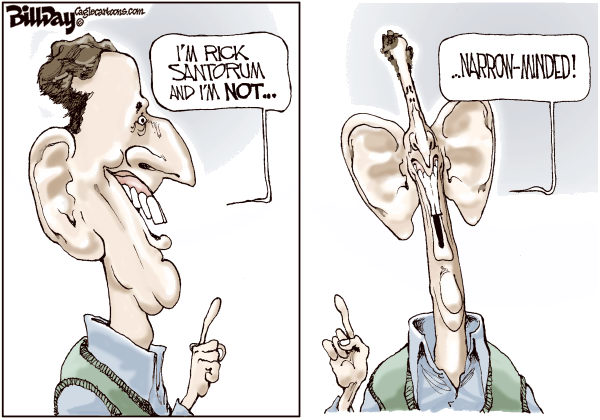 Do you know what that means?

In the 19th week of her pregnancy, Karen discovered during a routine exam that the fetus she was carrying had a fatal defect and was going to die inside of her. A long-shot surgery was performed that required cutting directly into the womb. It carried a high risk of infection and was performed not to save the fetus, but to reduce Karen’s complications while she attempted to go full term.

Two days later, she became severely feverish. She was rushed to the hospital and placed on intravenous antibiotics, which reduced her fever and bought her some time, but could not eliminate the source of infection: the fetus.

Karen was going to die if her pregnancy was not ended, if the fetus was not removed from her body. So, at 20 weeks, one month before what doctors consider ‘viability’, labor began as a result of the antibiotics and the infected fetus was delivered. It died shortly thereafter. Once the Santorums had agreed to the use of antibiotics, they believed they were committing to delivery of the fetus, which they knew would not survive outside the womb.[...]

The procedure, whereby labor is induced to remove the fetus before it has any chance of surviving on its own, is considered by Mr. Santorum to be a ‘partial-birth abortion’, and he is correct. He also personally authorized one to save his wife, whom he loves.

But Rick Santorum is now a candidate in the Republican Tea Party primary for the presidency.  He is taking a very strong stand against every other woman's rights to contraception, medically induced miscarriages/abortion, partial-birth abortion and prenatal tests. Now, Santorum doesn't  care if the reason for an abortion is incest, rape or to save the life of the mother. His opinions stem from his belief that these rights were not God given and therefore cannot be given at all. That means he wants to take them away. This is what Rick Santorum has to say on these issues:

ABORTION: I have my own views on these things. They are deeply held beliefs. But not everything that I disagree with morally should the government be involved in. Only where there are real consequences to society or to the rights of individuals do I feel a need to speak out and that's why I do on the issue of abortion, because we have another person involved in the decision. But in the issue of contraception that's certainly not the case.

Rick Santorum is a political operative who sees the issues from his own religious world view. His message is now being championed by his followers and broadcast by the media without in depth scrutiny.  However, when scrutiny is applied, what is left is misinformation, falsehoods and arrogance. The TRUTH:

ABORTION:  This is a difficult decision that is made by a woman who is pregnant. She does have the right to consult others but the decision to abort or have a "medically induce abortion" is hers and hers alone.   When Santorum says there is "another person involved" he is referring to what he believes is a living being inside the mother.  That is his belief and therefore, he should not have an abortion and he alone can decide not to have an abortion, if he ever finds himself pregnant!

Mr. Santorum's conclusions belittle the difficult and painful decision of the mother.  He should know.  His  wife, Karen, was in that situation.  She made the decision by consulting with her husband, as she had a right to do. It was their decision.  No one second guessed them.  No one tried to take away that right. Rick Santorum is now working very hard to take away every woman's right to these individual medical choices.

So who would vote for him? 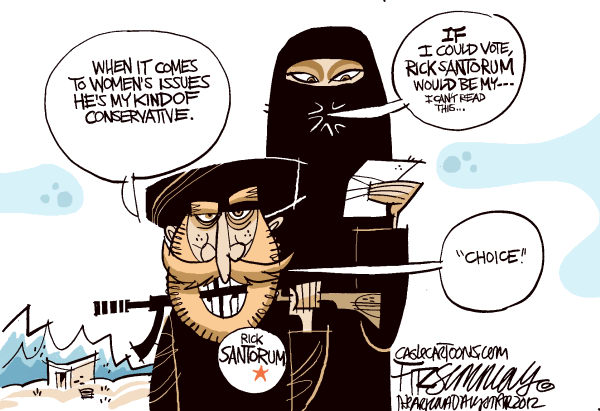