The Idiocy of the Culture Wars 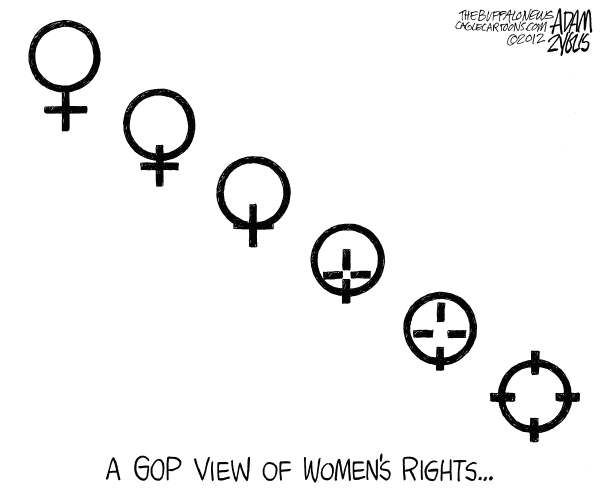 As the song goes, "War...what is it good for...absolutely nothing!"  Of course, those words sung by Edwin Star in 1969, represented a blatant anti-Vietnam War protest song.  In 2012, we are still fighting wars in other countries while the U.S. continues its wars against crime, drugs, and terrorists. And now the new escalated war on the scene is the 'culture war.'


While economic problems are a reality for the middle class and poor, the politics of the conservative movement has been focused on social issues. The conservative swing to the far-right has its basis in the religious fervor of those who find moral objection to anything that they believe is not granted in the Constitution or by God in the bible.  This broad spectrum of negatives that are morally objectionable to the conservatives will have devastating effects on public education, science based teachings, women's health care and equal rights for all.

This is apparent in the backlash that has erupted over the legislation that the Tea Party Republican's have recently purposed.  As Lauren Kelley writes, "Ordinary citizens aren't the only ones protesting the GOP's anti-gay, anti-woman measures -- several lawmakers and a judge recently did too."

Political history has repeated itself recently, in a terrible way, with the return of the culture wars. Rather than focus on much-needed steps to improve the economy, Republican lawmakers have been focusing in recent months on efforts to roll back women's rights, including access to abortion and contraception, while homophobia runs rampant among the 2012 GOP candidates.

Activists have responded to these attacks by attempting to dispel hateful myths and draw attention to the harm that could be done with Republicans' social agenda. For instance, about 1,000 activists gathered at the Virginia statehouse earlier this month to silently protest the invasive transvaginal ultrasound bill the state legislature was considering (and has since withdrawn).

But ordinary citizens aren't the only ones protesting these anti-gay, anti-woman measures; several lawmakers and a judge recently made headlines for their creative and inspiring efforts to highlight the absurdities of the new culture wars.

Texas judge Tonya Parker takes a very straightforward stance on officiating marriage ceremonies: she won't do it. Why? Because under Texas law, Parker, who is gay, does not have the right to get married herself.
Parker recently told a members of the Stonewall Democrats of Dallas (via the Dallas Voice):

"I use it as my opportunity to give them a lesson about marriage inequality in this state because I feel like I have to tell them why I'm turning them away. So I usually will offer them something along the lines of 'I'm sorry. I don't perform marriage ceremonies because we are in a state that does not have marriage equality, and until it does, I am not going to partially apply the law to one group of people that doesn't apply to another group of people.' And it's kind of oxymoronic for me to perform ceremonies that can't be performed for me, so I'm not going to do it."

Parker has a point -- why should she have to perform marriage ceremonies when she would not be able to waltz into a courthouse and get married to her own partner?

Just last week a second federal judge deemed the Defense of Marriage Act (DOMA) unconstitutional, paving the way for the law to head to the Supreme Court, and both Washington and Maryland moved to legalize same-sex marriage in the past month. So here's hoping Parker will be able to start performing both gay and straight marriages sooner rather than later.

Watch Parker's speech to the Stonewall Democrats of Dallas:

"Personhood" measures that would give legal rights to fetuses are all the rage among anti-choice Republican lawmakers these days, with bills popping up in Mississippi, Colorado, and most recently, Virginia and Oklahoma. The legislation proved to be highly unpopular in Mississippi and Colorado, and was roundly defeated. But personhood could become law in Oklahoma very soon, as it has already passed both state legislative chambers.

Women's rights advocates are obviously enraged at this development, which, as Sarah Seltzer wrote recently:

threaten[s] the legal standing of everything from in vitro fertilization to the morning-after pill to miscarriages to many kinds of birth control -- and this particular bill has no rape or incest exceptions.
In a less legal sense, it pathologizes women who struggle with fertility (are their bodies murderers?), and contrary to its name, makes them into less than full persons. If this bill gets signed into law, it will be the first genuine personhood law that goes into effect.

Democrats in the state are also upset about the measure, and one Dem lawmaker, Constance Johnson, decided to do something about it by inserting the following language into the personhood bill:

However, any action in which a man ejaculates or otherwise deposits semen anywhere but in a woman's vagina shall be interpreted and construed as an action against an unborn child.

Johnson just took the Republicans' logic to its logical extreme: if they want to say life begins at conception, then why not go ahead and say that life begins at ejaculation? It was a wiseass move that wasn't meant to be taken seriously, but what it did do is pretty great. The move garnered headlines and drew attention to the absurdity of anti-choice legislation. Brava, state Sen. Johnson.

3. Virginia lawmaker: if women must undergo an ultrasound to get an abortion, men should have to get a rectal exam before receiving Viagra.

Another troubling anti-choice legislative trend is the transvaginal ultrasound requirement. Under such measures, many women seeking abortions would be required to undergo an invasive vaginal procedure that is not medically necessary -- in other words, to endure state-sanctioned rape. (At least a few Republicans have poo-poohed the outrage over such measures by arguing, absurdly, that women consented to vaginal penetration when they had sex, so that consent should carry over when seeking an abortion.)

Texas already has a transvaginal ultrasound law on the books, and such measures have also been considered in Pennsylvania and Virginia, where, as mentioned above, more than 1,000 women's rights supporters gathered recently to protest the bill.

Another person who protested Virginia's ultrasound bill was Democratic state Sen. Janet Howell, who introduced an amendment into the legislature that would have required men to obtain a rectal exam and cardiac stress test before they could receive a prescription for Viagra. As Howell told the Huffington Post, "We need some gender equity here. The Virginia Senate is about to pass a bill that will require a woman to have totally unnecessary medical procedure at their cost and inconvenience. If we're going to do that to women, why not do that to men?"

Amid all the outrage, Virginia Gov. Bob McDonnell revised the legislation to do away with the transvaginal ultrasound requirement. However, women seeking abortions in the state still would have to undergo a medically unnecessary external ultrasound.

By now virtually everyone has heard about Rep. Darrell Issa's recent hearing on whether employees at religiously affiliated institutions should be required to receive insurance that covers birth control without a co-payment. People were up in arms because the panel debating the issue looked like this:

Not a woman in sight. In fact, when a woman tried to testify, Issa refused to let her participate, arguing that "As the hearing is not about reproductive rights and contraception but instead about the Administration's actions as they relate to freedom of religion and conscience, he believes that Ms. Fluke is not an appropriate witness."

Enraged by the all-male panel, Democratic women present at the Issa hearing staged a walk-out. As Think Progress reported :

Reps. Carolyn Maloney (D-NY) and Eleanor Holmes Norton (D-DC) walked out of the hearing in protest of his decision, citing frustration over the fact that the first panel of witnesses consisted only of male religious leaders against the rule. Holmes Norton said she will not return, calling Issa's chairmanship an "autocratic regime."

The good news is that Sandra Fluke got a chance to speak a week later, at an alterna-hearing organized by Nancy Pelosi.

Rather than roll over and admit defeat, these lawmakers, and the judge from Texas, channeled their outrage over the GOP culture wars into creative, meaningful activism. Might we all learn something from them.

This conservative narrative is also apparent regarding other social issues. There is now a movement among conservative think tanks to create confusion and controversy regarding whether or not humans are changing the weather and the issue of public education.


Leaked documents reveal a right-wing think-tank's plans to undermine the teaching of climate science -- and defund public education in the process.

Though the various “reform” proposals these groups support typically involve rhetoric about “choice” and “markets” and “accountability,” when you boil off the vapors what you are left with is nothing more than a plan to take money away from public schools and hand it over to religious academies in the form of vouchers.

A conservative Republican Tea Party platform will continue to fight the rights of women, fight the rights of marriage and equality for all individuals, promote tax cuts to the rich, promote teaching creationism and abstinence in schools as well as defunding welfare, healthcare, medicare, social security and the public schools.  It is a misogynistic, homophobic, fear-based, religious platform.