Globe-trotting humanitarian Greg Mortenson co-author of the best-selling memoir Three Cups of Tea: One Man's Mission to Promote Peace … One School at a Time, keeps a reminder pasted to his bathroom mirror back home in Bozeman, Mont.: "When your heart speaks, take good notes."
Greg Mortenson's Peacebuilding Efforts 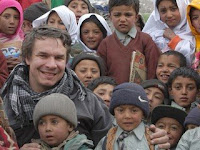 rtenson has been promoting peace by building schools and purging ignorance in Pakistan and Afghanistan for more than a decade.

It all started accidentally. In 1993 on his way down from a harrowing and unsuccessful climb of the world's second tallest mountain, K2 in northern Pakistan, an exhausted and dehydrated Mortenson stumbled into the village of Korphe. The people of the village helped him get well. While recovering he noticed the children had nowhere to learn.

"When I saw those 84 children sitting in the dirt and they asked for help to build a school I made a promise that day that I would help them," Mortenson explained.

Mortenson returned to the United States and began to try to raise money for the project. He composed letters on a borrowed electric typewriter and sent them to 580 celebrities asking for help. He got one $100 check.

Mortenson said he had found his calling. He started a nonprofit group called the Central Asia Institute and has since built 78 schools for 33,000 Pakistani and Afghan children. That is an amazing accomplishment in a region where the literacy rate is as low as 20 percent. The road has been anything but smooth. He had a fatwa leveled against him by a Muslim leader who didn't trust him. He was kidnapped. And when he began to focus on educating girls, the Taliban did all they could to stop him. But persevered.

Read the article here.
Posted by rross at 9:05 PM