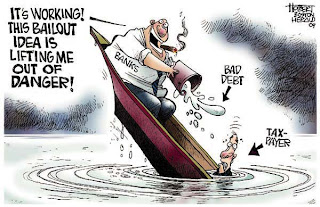 Frank Rich is right. Firing Treasury Secretary Timothy Geithner won't get us out of the economic disaster we're in. But at this time of righteous rage, deploying Geithner and Lawrence Summers as the administration's chief economic messengers displays an astonishing tone-deafness. These are men who, as Rich puts it, " are too marinated in the insiders' culture to police it, reform it or own up to their past complicity with it."

Or as The Nation's William Greider explains in Sunday's Washington Post, the anger roiling the nation could "devour his presidency." Yet Obama "does not seem to grasp that the tone-deaf technocrats are leading him into a dead-end."

Vanden Heuvel believes that, "We deserve a Treasury Secretary who hasn't been a player in Wall Street's lifestyle of bonuses and legalized corruption." She puts forth the possibility of bringing in Nobel Prize winning economists Joseph Stiglitz or Paul Krugman. She posits that "they are increasingly valuable as watchdogs and constructive critics working outside the Administration."

Vanden Heuval is looking for someone outside of the banking business and corporate power structure who will be an independent observer and thinker. She has a 'novel idea.'

Why not bring in the man who took on Wall Street and AIG long before it was trendy? Eliot Spitzer. Call me crazy. But he foresaw the bubbles and disasters resulting from deregulatory frenzy and the financial service industry's creation of toxic credit default swaps and derivatives. As the Sherriff of Wall Street, Spitzer launched investigations and lawsuits deploying the creative cudgel of the previously-obscure 1921 Martin Act. [...]

In his first television interview since resigning as Governor, on CNN"s Fareed Zakaria's "GPS" program, Spitzer offered a compelling analysis of how we got into this mess and spoke clearly about the need for new regulations to rein in Wall Street's "recklessness and greed." He criticized Wall Street's former masters for their "hot dog cowboy mentality which leveraged everything up." (And he praised old fashioned Wall Street types like Felix Rohatyn for not falling prey to that mentality.)

While acknowledging the outrage of AIG's bonuses, Spitzer focused on the larger outrage: the use of billions in taxpayer dollars to prop up AIG and various counterparties, including Goldman Sachs (which received $12 billion plus of the government's original infusion). He also castigated the media, including CNBC, for failing to ask the tough questions, and the SEC and other relevant government agencies for lacking the will and creativity to do their job. When asked about how he'd handle the legal issue of retrieving AIG 's bonuses, Spitzer referred to tort law and the theory of unjust enrichment--along with other creative ideas--to get justice for taxpayers.

Spitzer took on Wall Street's metastasizing corruption before the meltdown. He defended consumers' and taxpayers' rights. He speaks with passion and clarity about what went wrong and what needs to be done to restore integrity to our system. He is chastened by personal scandal, yet untouched by complicity in Wall Street's public scandals which have obliterated peoples' savings and devastated our country.

So what do you think?