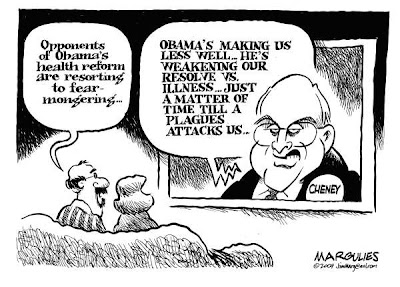 ...Maybe the real question is, What is it about health care that brings out the latent racism in the GOP?

The answer is simple: For two or three generations, Republicans have defeated progressive reform of the health care system by hinting that it would mean redistributing wealth from whites to blacks. As Beck himself said, practically redefining "welfare queen" as "healthcare queen": "Everything that is getting pushed through Congress, including this health care bill, are transforming America, and they're all driven by President Obama's thinking on one idea: reparations."

Nevertheless, when we see that Obama's poll numbers have dropped back to the margin of victory he had in the election and have even gone underwater on his handling of health care, it really shouldn't make us give up on the prospect of reform. [...]

The Daily Kos/Research 2000 poll showing that 58 percent of Republicans either don't believe Obama was born in the U.S. or aren't sure (compared to 7 percent for Dems and 17 for independents), confirms Bill Maher's formulation: Not all Republicans are racist, but if you are a racist these days, you're probably a Republican. [...]

But watching the Republican Party morph into the National Association for the Advancement of White People should give us all hope, not despair: Anything that brings 'em out of the closet and gets 'em running naked through the streets shouting, "I'm the victim here, dammit!" will only ensure their minority status over the long run.