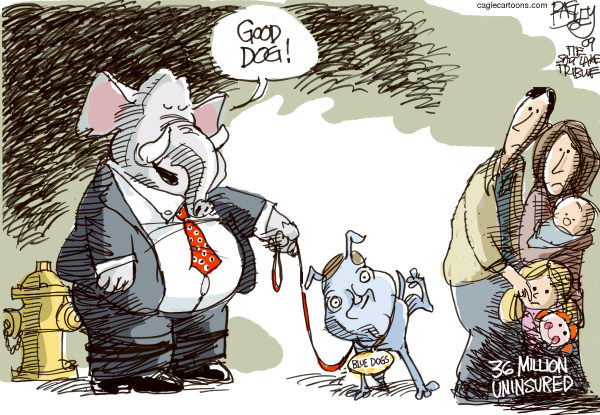 A general concept that I have embraced is that you can't out Republican a Republican. Little did I know that Harry S. Truman said it more succinctly when he said: "Given the choice between a Republican and someone who acts like a Republican, people will vote for the real Republican all the time."

As Scott Galindez points out in his article, They Voted for the Real Republican, the Democrats lose of it's majority in Congress can be linked directly to the Blue Dogs and the Democratic majority's unwise dependence on "Democrats who acted like Republicans."

It was bound to happen sooner or later, the Democrat's majority in Congress was built on a house of cards that was doomed to collapse. The base is strong: progressive and liberal Democrats are re-elected to be real Democrats. The problem is the majority depended on Democrats who acted like Republicans.

There were exceptions to the rule; Russ Feingold and Alan Grayson are examples of real Democrats who lost this year. Grayson's problem was that he was in a Republican district and was elected in 2008 on Obama's coattails. Bill McCollum had held the seat for most of the previous decade.

There were other freshmen Democrats who had used Obama's coattails to win seats in traditional Republican districts, many of them lost this time around.

Going into last Tuesday's election the House Blue Dog caucus had 54 members. 28 of them will not be returning. While that doesn't in itself give the Republicans the majority, when you factor in other moderates who are not necessarily considered Blue Dogs - like Ike Skelton, who also went down in defeat - there is a clear theme developing. Skelton, for example, voted "no" on healthcare, was a hawk on defense and a fiscal conservative.

The theme is that if you were a Democrat who acted like a Republican, your constituents voted for the real Republican this time.

Many will argue that this theory is too simplistic. What about Feingold, Grayson and others? Some of the freshmen were liberal, were they not?

The freshmen came in with a mandate to help Obama bring change to Washington. Voters, however, watched the moderates and Blue Dogs block the public option, and water down the stimulus, financial reform and other key legislation. The result was that young voters, progressives and liberals stayed home.

If more change had come to Washington in the last two years Democrats would have fought back. It was the Blue Dogs, not Nancy Pelosi, who blocked that change.

Let's all remember that Rahm Emanuel was wrong in thinking that Blue Dogs would help Democrats win. Obama was misguided in thinking he could depend on Emanuel's guidance.
Posted by rross at 8:20 AM