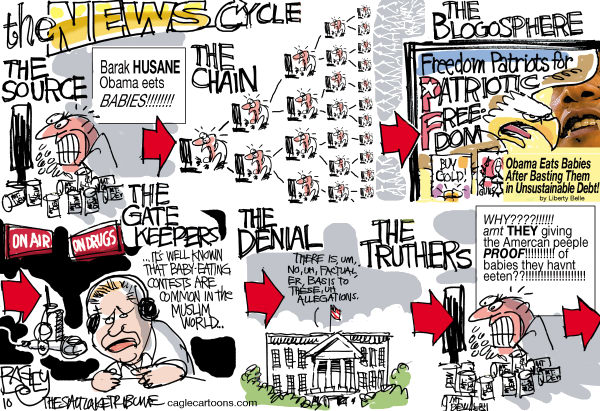 Republican and conservative politicians, commentators and pundits have continually repeated a litany of falsehoods regarding such issues as tax cuts, the deficit, the economy, and the cost of health care. Dave Johnson has put together the "Eight False Things the Public "Knows" prior to Election Day."

There are a number things the public "knows" as we head into the election that are just false. If people elect leaders based on false information, the things those leaders do in office will not be what the public expects or needs.

Here are eight of the biggest myths that are out there:

2) President Obama raised taxes, which hurt the economy.
Reality: Obama cut taxes. 40% of the "stimulus" was wasted on tax cuts which only create debt, which is why it was so much less effective than it could have been.

4) The stimulus didn't work.
Reality: The stimulus worked, but was not enough. In fact, according to the Congressional Budget Office, the stimulus raised employment by between 1.4 million and 3.3 million jobs.

5) Businesses will hire if they get tax cuts.
Reality: A business hires the right number of employees to meet demand. Having extra cash does not cause a business to hire, but a business that has a demand for what it does will find the money to hire. Businesses want customers, not tax cuts.

7) Social Security is a Ponzi scheme, is "going broke," people live longer, fewer workers per retiree, etc.
Reality: Social Security has run a surplus since it began, has a trust fund in the trillions, is completely sound for at least 25 more years and cannot legally borrow so cannot contribute to the deficit (compare that to the military budget!) Life expectancy is only longer because fewer babies die; people who reach 65 live about the same number of years as they used to.

If the public votes in a new Congress that rejects the idea of helping to create demand in the economy because they think it didn't work, then the new Congress could do things that cause a depression.

Framing the issue is so important. These nasty conservative lies must be addressed and dealt with by the Democrats and President Obama. New frames are needed to counter all falsehoods.

This is a wonderful and clear answer to the lies of the Right!! Thank you!