You Call This News? 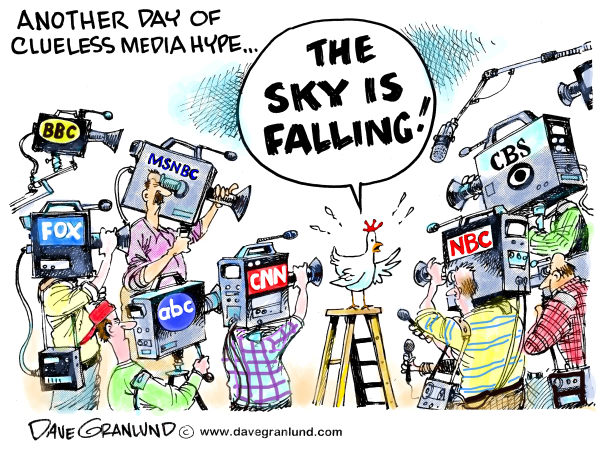 Amy Goodman, host of “Democracy Now!,” has it right in her article, Rich Media, Poor Democracy. She finds that in this last election the biggest winner was the broadcast media at the expense of our democracy.

As the 2010 elections come to a close, the biggest winner of all remains undeclared: the broadcasters. The biggest loser: democracy. These were the most expensive midterm elections in U.S. history, costing close to $4 billion, $3 billion of which went to advertising. What if ad time were free? We hear no debate about this, because the media corporations are making such a killing by selling campaign ads. Yet the broadcasters are using public airwaves.

I am reminded of the 1999 book by media scholar Robert McChesney, “Rich Media, Poor Democracy.” In it, he writes, “Broadcasters have little incentive to cover candidates, because it is in their interest to force them to publicize their campaigns.”

The Wesleyan Media Project, at Wesleyan University, tracks political advertising. Following the recent Supreme Court ruling, Citizens United v. FEC, the project notes, “The airwaves are being saturated with more House and Senate advertising, up 20 percent and 79 percent respectively in total airings.” Evan Tracey, the founder and president of Campaign Media Analysis Group, predicted in USA Today in July, “There is going to be more money than there is airtime to buy.” John Nichols of The Nation commented that in the genteel, earlier days of television political advertising, the broadcasters would never juxtapose an ad for a candidate with an ad opposed to that candidate. But they are running out of broadcast real estate. Welcome to the brave, new world of the multibillion dollar campaigns.

There have been efforts in the past to regulate the airwaves to better serve the public during elections. The most ambitious in recent years was what became known as McCain-Feingold campaign-finance reform. During the debate on that landmark legislation, the problem of exorbitant television advertising rates was brought up, by Democrats and Republicans alike. Nevada Sen. John Ensign, a Republican, lamented: “The broadcasters used to dread campaigns because that was the time of year they made the least amount of money because of this lowest unit rate. Now it is one of their favorite times of the year because it is actually one of their highest profit-margin times of the year.” Ultimately, to get the bill passed, the public airtime provisions were dropped.

The Citizens United ruling effectively neutralizes McCain-Feingold campaign-finance reform. One can only imagine what the cost of the 2012 presidential election will be. Sen. Russ Feingold, D-Wis., lost his re-election bid to the largely self-financed multimillionaire Ron Johnson. The Wall Street Journal editorial page celebrated Feingold’s expected loss. The Journal is owned by Rupert Murdoch’s News Corp., which also owns the Fox television network and which gave close to $2 million to Republican campaign efforts.

“The elections have become a commodity, a profit center for these radio and TV stations,” Ralph Nader, consumer advocate and former presidential candidate, told me on Election Day. He went on: “The public airwaves, as we know, belong to the people, and they’re the landlords, and the radio and TV stations are the licensees. They’re the tenants, so to speak. They pay no money to the FCC for their annual license. And therefore, it’s really quite persuasive, were we to have a public policy to condition modestly the license to this enormously lucrative control of the public airwaves 24 hours a day by these TV and radio stations and say, as part of the reciprocity for controlling this commons, so to speak, you have to allow a certain amount of time, free time, on radio and TV for ballot-qualified candidates.”

The place where we should debate this is in the major media, where most Americans get their news. But the television and radio broadcasters have a profound conflict of interest. Their profits take precedence over our democratic process. You very likely won’t hear this discussed on the Sunday-morning talk shows.

This is the unfortunate result of President Bill Clinton believing that working with the Republicans and triangulation would be the answer. He signed the 1996 Telecommunication Act which set up the way for the concentration of media ownership.

Today in the U.S. there are about 6 major media conglomerates that the public is now beholden to for our skewed and unjournalistic news. They are Disney, News Corporation, Sony Corporation, Time Warner, Viacom and Vivendi.

Here's is the breakdown of what they own.

It is time for change.

Hello, you site is very funny he told me to cheer up .. Merry Christmas.

Little slow to boot site, this may because I'm from Israel, but the main thing that is not in vain waited interesting.

Merry Christmas and Happy New Year, may all your wishes come true!

Merry Christmas! Let the new year will bring a lot of money


You should take part in a contest for top-of-the-line blogs on the web. I will recommend this website!