Where Did All the Money Go? 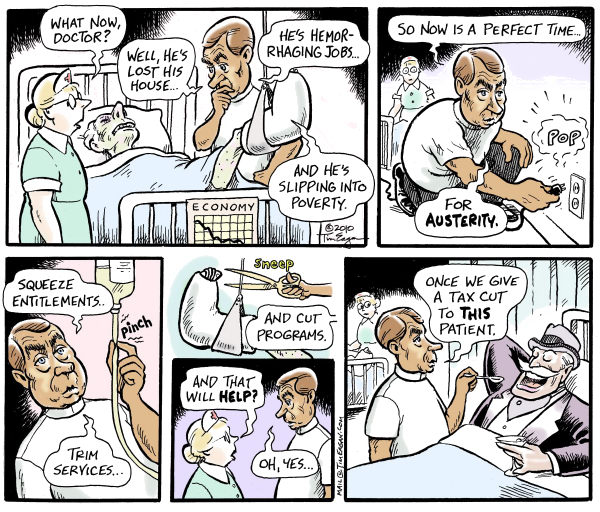 I am far from an economist who understands the ins and outs of the market. But there are some principles that are just so simple and easy to understand. We all need to take notice when Wall Street shenanigans cause a major meltdown in the economy as Wall Street continues to amass billions of dollars and then the only remedy that is suggested is that the poor and middle class of this country tighten their belts and grin and bear it.

Who's side are the big bankers and investment brokers and moneyed politicians on? I would suggest they are on the side of big business, large corporations and Wall Street.

Crooks and Liars has an article on that point, Who is Peter G. Peterson and Why Should We Trust Him?

I'm not sure hedge fund managers and investment bankers are really the right group to be determining our fiscal future. In fact, I'm pretty sure they're not. But Peter G. Peterson is a very serious man on a very serious mission, and that mission includes a film, a book, a couple of foundations, and a billion-dollar effort to re-educate Americans on very serious matters, like Social Security, and Medicare, and anything that really has a deep impact on the poor and middle classes in this country. Peterson is so committed to this mission that he started his foundation with a $1-billion dollar grant and has branched out from there.

The Peter G. Peterson foundation claims to be bipartisan, yet their former CEO is out pimping a book, a new advocacy group and a position. Peter G. Peterson served as Secretary of Commerce under Richard Nixon. He claims to be very, very, very concerned about our deficit, yet not one word is uttered in this report about Wall Street's contribution to the deficit, the collapse of our economy, or any responsibility on the part of the financial industry to help reduce the deficit they helped create.

Peterson Foundation staff members served as staff to Erskine Bowles and Alan Simpson. Peter G. Peterson is founder of Blackstone Group, an investment group that made him billions during his Wall Street tenure. He is a fiscal conservative, a deficit hawk and he and his foundation are on a mission to tell us that we should all sacrifice and suffer to pay off the national debt while letting Wall Street completely off the hook.

Erskine Bowles is also on Wall Street's payroll, so it's not too much of a surprise to discover that he might have "forgotten" to pay attention to Wall Street responsibility for our current economic woes.

Next came a cover story in the March 5 Fortune declaring Schwarzman, who had just completed the gigantic acquisition of Equity Office Properties, "The New King of Wall Street." Then, only a few months after saying that Sarbanes-Oxley was deterring companies from going public, he filed a huge IPO for the Blackstone Group. If it goes through as planned, according to the Wall Street Journal, Schwarzman's sale will be worth $7.5 billion. This offering included several wrinkles that solidified Schwarzman's smartest-guy-in-the-room reputation but also seemed designed to elicit scrutiny. As the Financial Times reported ($ required), the preliminary prospectus said the firm planned to "book profits from private equity at the time an asset is bought"—not when the assets are sold, as most businesses do. More significantly, the offering was structured as a "publicly traded partnership" to take advantage of an absurd wrinkle in the tax code. Under current rules, the asset-management fees that private-equity partnerships like Blackstone reap are taxed not at the 35 percent corporate income-tax rate, but at the 15 percent long-term capital-gains rate, allowing Blackstone to save tens of millions of dollars annually on its tax bill. Finally, in May, at a time when concerns about China's role in the global economy and its influence on the United States were at a fever pitch, Schwarzman agreed to sell a 10 percent stake in Blackstone to an entity controlled by China's government.

This is the partner of the man who is spending huge sums of money to tell us we're all doomed because China owns some of our debt? Erskine Bowles and Alan Simpson are just tools. This guy is the string puller, and he's putting fake campaign ads on the air, sending his former CEO out on a publicity tour, and basically trying to sell us all a bill of goods for what?

Robert Reich, Chancellor's Professor of Public Policy at the University of California at Berkeley, a writer, and a political commentator, asks Why We Should Beware Budget-Deficit Mania. He believes that the, "preliminary report of the President’s deficit commission doesn’t help. It’s another example of budget-deficit mania generating more heat than light."

As to solution, the report mentions but doesn’t emphasize the biggest driver of future deficits – the relentless rise in health-care costs coupled with the pending corrosion of 77 million boomer bodies. This is 70 percent of the problem, but it gets about 3 percent of the space in the draft.

The report suffers a more fundamental error — the unquestioned assumption that America’s biggest economic challenge is to reduce the federal budget deficit.[...]

Our biggest problem isn’t the size of pending federal budget deficits or debt but an anemic recovery that may drag on for years. And unless we’re careful, budget-deficit mania may further slow economic growth – thereby making future debts even less manageable.

For example, if the economy were to grow a point or two faster over the next few decades, the deficit would become manageable, and eventually disappear. The historic growth rate of the U.S. economy, over more than two centuries, has been three percent. But in the last decade, the growth rate has been less than two percent. If that growth gap continues, we will never balance the budget.

Unfortunately for all of us, those sorts of creative ideas--economic growth, medical cures, and energy development--are not mentioned in the Bowles-Simpson report. Nor did we get any innovative suggestions, for say, restructuring the federal government’s operating model.

All we got was a dead cat. And a not very smart dead cat at that.

Real reform takes vision. Unfortunately, too many politicians have been blinded by the light of greed.
Posted by rross at 7:32 AM

I fool read a insufficient of the articles on your website now, and I unqualifiedly like your fashionableness of blogging. I added it to my favorites net period roster and resolve be checking stand behind soon. Will report register into public notice my put as approvingly and vindicate me be familiar with what you think. Thanks.