Exaggerations and Fear-Mongering in Congress 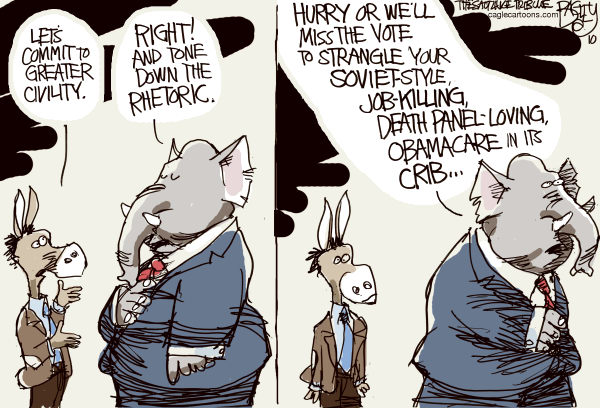 In response to the remarks of Gingrey and King, Rep. Sheila Jackson-Lee (D-TX) excoriated her Republican colleagues.

"We have to respond to someone who got up and actually said this is the worst bill that's ever been passed. What about the slave laws? What about the fugitive slave laws. How dare anyone suggest this is the worst bill when we give opportunity to all Americans. This amendment should be denied...There are Republicans who believe we should provide health care for America."

NBC's Luke Russert took a look at Gingrey's statement while he also considered the nation's history.


Some historians may argue that the Alien and Sedition Act of 1798 or the Sedition Act of 1918, which essentially made it a crime to criticize the U.S. government, may be worse -- as they were a clear violation of the First Amendment.

Another black eye in the nation's history, the Missouri Compromise of 1820, which allowed for slavery to exist beneath the 36-30 parallel was passed by Congress in an effort for America to continue as a half slave and half-free state.

Perhaps the worst bill passed by Congress is the Fugitive Slave Act of 1850. This legislation called for all runaway slaves to be returned to their masters. The only thing needed to track and apprehend a slave was a sworn affidavit from a master. Also, the slave had no right to jury trial or right to testify on their behalf.

So as this contentious debate on an amendment to defund health-care reform goes forward in 2011, it's important to remember that our nation has come a long way since 1776 and seen its fair share of egregious legislation that has had to do with human rights.

Let's break-down the words of Gingrey and King:

Both Sheila Jackson-Lee and Luke Russert note the lack of historic knowledge in the statements of Gingrey and King. It is imperative that lawmakers stop using scare tactics and broad exaggerations as the basis for their positions on issues. It should be the facts, stupid!