“If you aren't completely appalled then you haven't been paying attention” 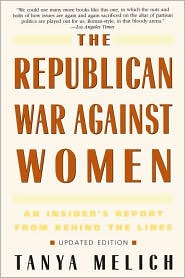 This war is not new. GOP strategists are escalating the Republican War Against Women that has been going on since the '80s.  However, this new wave of attacks also has a front of women voicing their opposition to the feminist agenda.

Palin and her mama grizzlies are a twenty-first century upgrading of the backlash against women and minorities strategy that put Ronald Reagan, George H. W. Bush and Bush II in the White House. These angry women are the bait, stirring a pot of discontent against the Obama Presidency. Their candidacies are the first act in a plan by the Republican right—now joined by its Tea Party allies and supply-side libertarians—to run the Republican party .

Their goal is the White House and a radical redirection of American government that will rollback much of the New Deal and Great Society policies. They seek repeal of many of the laws of the last thirty years that opened opportunities for those left out of America's mainstream— women, minorities, gays and immigrants.

It is engineered by a new generation of Republican tacticians who have built their strategy on the foundation laid in the original Republican War Against Women. That earlier crew—composed of Reagan's campaign team, new right and religious right leaders—orchestrated the defeat of the Equal Rights Amendment, opposed affirmative action, federal money for child care and numerous policies aimed at making life better for women and their families.

The centerpiece of this war has always been women's reproductive health. Through the 1970s and 1980s, abortion was its principal issue. Now they have expanded their opposition to stem cell research and contraception.

For these 2010 angry women candidates, opposition to abortion remains the keystone of their political philosophy. But they downplayed abortion in their campaigns, instead attacking big government spending and high taxes.

Don't be fooled, the 'Good Ole Boys' are still in control

The strategic aim of this newest version of the backlash strategy is to weaken the Democrat's attraction to its strongest constituency, women voters. This year it had three parts:

2- To use this Republican female energy to attract independent women who occasionally voted Republican and want lower taxes and less government.

3- To make Democratic women feel a sense of hopelessness, to encourage a lack of enthusiasm for voting, to alienate them from Obama.

What is surprising is how long it took this male-dominated, backlash political machine to recognize that the path to control of state houses, Congress and the White House was with feisty right-wing women candidates.

The Republican War against Woman has not ended. But it's got Palin, Michele Bachmann, re-elected to her Minnesota congressional seat, and now Nikki Haley and Susana Martinez leading it.

Read the complete list of the "Top 10 Shocking Attacks from the GOP's War on Women."
1) Republicans not only want to reduce women's access to abortion care, they're actually trying to redefine rape. After a major backlash, they promised to stop. But they haven't yet. Shocker.
2) A state legislator in Georgia wants to change the legal term for victims of rape, stalking, and domestic violence to "accuser." But victims of other less gendered crimes, like burglary, would remain "victims."
3) In South Dakota, Republicans proposed a bill that could make it legal to murder a doctor who provides abortion care. (Yep, for real.)
4) Republicans want to cut nearly a billion dollars of food and other aid to low-income pregnant women, mothers, babies, and kids.
5) In Congress, Republicans have a bill that would let hospitals allow a woman to die rather than perform an abortion necessary to save her life.

6) Maryland Republicans ended all county money for a low-income kids' preschool program. Why? No need, they said. Women should really be home with the kids, not out working.