Her Own Worst Enemy 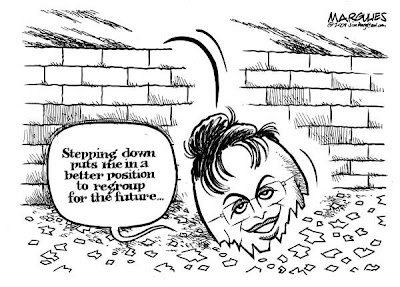 Sarah Palin thinks that if she quits her position as Governor of Alaska she can get away from the ethics violations that have been thrust upon her.

What she doesn't realize is that 'she can run but she can't hide' from herself. She is her own worst enemy. Her thoughts are rambling, her statements are disjointed and her ideas are absolutely unfathomable. She can't get away from being Sarah Palin!

Sarah Palin and her defenders have cited numerous ethics complaints against the Alaska governor as a practical reason for her resignation. Fighting the claims, Palin told the Anchorage Daily News Monday, was immobilizing her: "I'm not going to let Alaskans go through a year of stymied, paralyzed administration and not getting anything done."

Naturally, skeptical observers have wondered how Palin would handle being president if some ethics complaints are enough to make her unable to run a state. Palin's answer: if she was president, the Department of Law would protect her.

Palin said there is a difference between the White House and what she has experienced in Alaska. If she were in the White House the "department of law" would protect her from baseless ethical allegations.

"I think on a national level your department of law there in the White House would look at some of the things that we've been charged with and automatically throw them out," she said.

There is no Department of Law at the White House. Steve Benen has the following observation:

It's tempting to think Palin may have been referring to the Justice Department, but it's not "in the White House," and it doesn't have the authority to "throw out" charges against the president. Maybe she's thinking of the White House Counsel's Office, but again, it has the ability to defend against allegations, not "look at some of the things that we've been charged with and automatically throw them out."

Indeed, the very assumption that a president is somehow shielded or protected against allegations is itself misguided.

Palin continues to be hopelessly confused about the basics of government. Maybe now that she'll have some free time on her hands, she can brush up on Civics 101.