The Santorum Plan is God's Plan 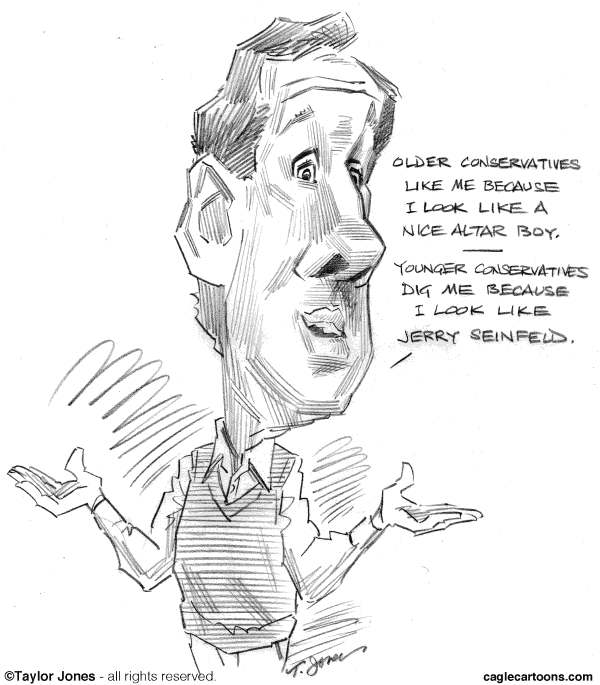 A group of evangelical and social conservative leaders recently voted to back the candidacy of Rick Santorum in the race for the GOP Presidential nomination. Is this support just a last attempt to stop front-runner Mitt Romney? Or is it an acknowledgment that Santorum's positions fit the beliefs of the more conservative element of the GOP? Santorum has unwaveringly opposed same-sex marriage, adoption by same-sex couples, abortion, partial-birth abortion, contraception, global warming and evolution. Here are Santorum's positions on these issues:

"The state is not doing a service to the child and to society by not putting that child in a home where there is a mother and a father. This is common sense. This is nature. Even fathers in jail who had abandoned their kids were still better than no father at all to have in their children's lives."

And on debating the partial-birth abortion ban in 1996, Santorum said: “Mr. President, I just need to restate, we have quoted physician after physician, obstetrician after obstetrician, pro-life, pro-choice, people who have performed abortions—this is not Rick Santorum or James Inhofe or Mike DeWine or Bob Smith—these are physicians, obstetricians, who are saying that this procedure is never, never, never medically necessary to save the health or life of the mother. Never. Never.”

Even though Santorum has previously testified that there are no circumstances where abortion is necessary to protect the life of the mother, his wife Karen had a second trimester abortion in October 1996. The Santorums were told that if she did not induce her labor, she and the baby would more than likely die. The decision was made to induce labor, and abort the fetus. However, the Rick and Karen don't call it an abortion. Rather, they refer to it as a "medically induced miscarriage."


"This isn’t taught in any medical school. It isn’t done in any hospital. It isn’t done by any obstetrician. This is a rogue procedure for the convenience and economic benefit of abortionists and abortion clinics. Of course, it is not medically necessary. It is not even medically recognized."


Many of the Christian faith have said, well, that’s okay, contraception is okay. It’s not okay. It’s a license to do things in a sexual realm that is counter to how things are supposed to be.


"I believe the earth gets warmer, and I also believe the earth gets cooler, and I think history points out that it does that and that the idea that man through the production of CO2, which is a trace gas in the atmosphere and the man-made part of that trace gas is itself a trace gas, is somehow responsible for climate change is, I think, just patently absurd when you consider all of the other factors, El Niño, La Niña, sunspots, you know, moisture in the air."

Since January 1st, three state legislatures in Missouri, Indiana, and New Hampshire have all introduced bills that would force schools to teach creationism as an accepted science even if students, parents, and teachers are not Christians. Such bills infringe upon religious freedom as protected by the United States Constitution. Since 2004, 12 states have tried to pass creationism bills. Only one, in Louisiana, has become law. You may be wondering, where did all of these bills come from?
It turns out, all creationism bills introduced since 2004 are inspired by an amendment drafted and proposed by then Senator and current Republican Presidential candidate Rick Santorum in 2001. Santorum offered the amendment to be included in the No Child Left Behind Act. The amendment, which failed, promoted the teaching of intelligent design and questioned the academic standing of evolution in US public schools. Santorum didn’t craft the language of the bill by himself, however. He had help from Phillip E. Johnson of the Center for Science and Culture which is run by a conservative think tank known as Discovery Institute. Johnson is the founding adviser of the Center and is considered the founder of the intelligent design movement. He is also known as a member of the group for the Scientific Reappraisal of the HIV-AIDS Hypothesis, a prominent AIDS denialist group and has written that HIV does not cause AIDS, which explains why many religious extremists make such claims.
The amendment would have allowed schools and teachers to dispute evolution which the scientific community regards as the only credible, and thoroughly tested, scientific explanation for the development and diversification of all life on Earth. But people like Santorum, Johnson and other religious extremists want to replace the teaching of real science with creationism, a Biblical theory that is classified as pseudo-science by an overwhelming majority of scientists. There is no evidence supporting creationism, whereas plenty of evidence exists to support evolution.
So the next time you read a headline about a new creationism bill being introduced in a state, you’ll know exactly where the bill came from and who is responsible for trying to force religion upon our children.

Given his positions on social issues, Bruce Epperly ponders whether Santorum is the "Jesus candidate."
At least his wife, Karen, thinks so.


For me it’s not just another political race. It’s about going on to the battlefield and defending God’s truth in the World.