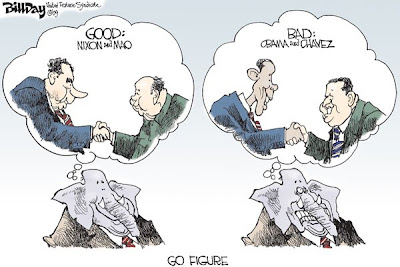 Today members of Congress as well as members of the media are spreading lies and innuendo. They are starting to label anyone in disagreement with them as "socialist."

It was just over 50 years ago, in 1950, that Sen Joseph McCarthy (R-WI) stated that he had a list of employees of the State Department who were "members of the Communist Party and members of a spy ring." Although his allegations were never substantiated, he attacked politicians and other individuals as being "communists."

In 1953, Sen McCarthy began holding extensive investigations of "Communists" in and out of the government.

On March 9, 1954, Edward R. Murrow hosted an episode of See It Now. The subject was Sen McCarthy. At the end of the program, here is what Murrow said of McCarthy:

His primary achievement has been in confusing the public mind, as between the internal and the external threats of Communism. We must not confuse dissent with disloyalty. We must remember always that accusation is not proof and that conviction depends upon evidence and due process of law. We will not walk in fear, one of another. We will not be driven by fear into an age of unreason, if we dig deep in our history and our doctrine, and remember that we are not descended from fearful men.

We proclaim ourselves, as indeed we are, the defenders of freedom, wherever it continues to exist in the world, but we cannot defend freedom abroad by deserting it at home. The actions of the junior Senator from Wisconsin have caused alarm and dismay amongst our allies abroad, and given considerable comfort to our enemies. And whose fault is that? Not really his. He didn't create this situation of fear; he merely exploited it -- and rather successfully.

The following article by Timothy Karr is important to read. It shows how today members of the Congress and members of the cable news network are once again provoking fear through baseless rhetoric.

Last week, conservative factions within the Republican National Committee circulated an e-mail urging party leadership to brand as a "socialist" anyone who advocates even moderate changes to the government's role in society.

It's clear that the overlords at Fox News Channel already got that memo and decided to ratchet the volume up a notch -- to 11.

According to Politico, RNC member James Bopp Jr. proposed a resolution that would acknowledge that President Obama wants "to restructure American society along socialist ideals" and call upon the Democratic Party to rename itself the "Democrat Socialist Party."

"Just as President Reagan's identification of the Soviet Union as the 'evil empire' galvanized opposition to communism," Bopp wrote, "we hope that the accurate depiction of the Democrats as a Socialist Party will galvanize opposition to their march to socialism."

And indeed, this has been a season of red-baiting the likes of which we haven't seen since the reign of a certain senator from Wisconsin. The week before Bopp's memo, Rep. Spencer Bachus (R-Ala.) insisted that "some of the men and women I work with in Congress are socialists." Bachus says he has already counted 17 of them but that there may be more.

Also keeping a list is Rep. Michele Bachmann (R-Minn.), who in the final days of the 2008 election season questioned then-candidate Obama's patriotism and called for an investigation of Democratic members of Congress for "anti-American views."

Bachmann didn't rest there. During an appearance late last month with Fox News Channel's Sean Hannity, she reiterated her call for a revolution against the tyranny of President Obama and congressional leadership.

"This is economic Marxism," Bachmann said of their economic stimulus plan. "[Obama] is moving the United States away from free-market capitalism and instead he's imprinting socialism deep into our centralized economic planning."

Like most of Bachmann's ranting in the media and on the Hill, these allegations make zero sense. But reality hasn't stopped her from assembling a political career out of comments that fan the flames of fear among the most militantly conservative.

Bachmann is by no means America's sole demagogue. That she's been given a national stage to insult our collective intelligence, though, is cause for notice.

Bopp, Bachus and Bachmann's rhetoric has been taken up by the tele-pundits of the right -- especially those prophets of doom who have made Fox News Channel their base of operations. But these knuckle-draggers aren't satisfied with fighting mere socialism.

"We're into socialism now. That's not our final destination," Fox News Channel's Glenn Beck said during his radio broadcast. "Our final destination is happy-faced fascism." In another segment on his cable program, Beck repeated this charge over a video backdrop of marching Nazis.

This Beck-Hannity obsession has triggered the "Fox Effect," a media phenomenon whereby the repetitive news framing of one 24-hour cable network seeps into the coverage of other outlets -- and, frighteningly, into the political discourse of society as a whole.

Before long, the cable talent at CNN, CNBC and MSNBC had fallen into step, booking right-wing guests intent on pressing the Marxist fear button.

On MSNBC's "Morning Joe," host Joe Scarborough has suggested that the Obama administration favors "European-styled socialism." CNBC's Larry Kudlow has made our "march to socialism" a centerpiece of several interviews on his evening program.

For its part, CNN dedicated several news shows to sage analysis of America's political shift, including a segment in which Quinn Hillyer, the editor and columnist of the conservative Washington Examiner and American Spectator, compared Obama's actions in his first hundred days to those of Mussolini in fascist Italy.

Missing from all the crowing is any meaningful reporting that provides context for our current economic situation, or analysis of changing public attitudes about increased government oversight of businesses like the banking sector.

Journalism: the Cause or the Cure?

All of this cable news hyperventilating comes at a moment when journalism is in deep crisis. The migration of news audiences to a free-flowing Internet has led to declines in circulation, subscription and advertising revenues for traditional media.

Falling revenues translate directly into budget cuts, which in turn mean more layoffs. More layoffs mean fewer journalists, and a lower-quality product as evidenced by the torrent of fear-mongering above.

Newsgathering institutions may die off or evolve over time, but one thing must endure: We need to sustain a corps of qualified working reporters who can earn a living delivering the real news and information that is the lifeblood of a healthy American democracy.

If the so-called journalists of cable news really want to protect us against totalitarianism, real or imagined, they'd do well to follow the examples of better reporting that are a part of our long history of newsgathering -- instead of simply aping the latest scare tactics at Fox News Channel.