She was sworn in after she was confirmed by the Senate in a 65-31 vote.

Two independents and nine Republicans joined the 54 Democrats voting for her confirmation; three senators didn’t vote at all. 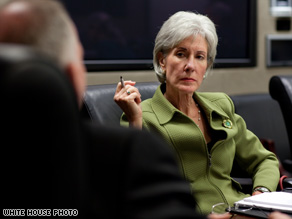 Kathleen Sebelius dives into discussing the swine flu at the White House after being sworn in.
Posted by rross at 9:29 AM