Fear and Loathing from The New GOP 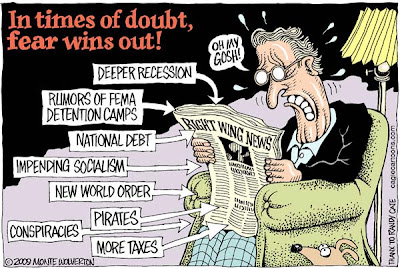 "Manufacturing a Controversy out of Nothing"

The GOP, the far right and the right wing media do not like Barack Obama or his Administration. During the eight years that George W. Bush was in office their outrage was evident only when they perceived criticism toward the Bush Administration, the War in Iraq or W's policies of wire tapping, torture and expanding executive privilege. They then spewed out their venom against being anti-American and unpatriotic.

Now their anger has become explosive. They have voiced opposition to The Serve America Act. They feel threatened by gay marriage or civil unions. They are claiming that Obama is raising their taxes and that the administration is a threat to their personal freedoms.
The latest threat that they are complaining about is a new report by the Department of Homeland Security. The DHS report warns about the rise in "right wing extremist activity."

[The report says that] the economic recession, the election of America's first black president and the return of a few disgruntled war veterans could swell the ranks of white-power militias.

A footnote attached to the report by the Homeland Security Office of Intelligence and Analysis defines "right wing extremism in the United States" as including not just racist or hate groups, but also groups that reject federal authority in favor of state or local authority.

"It may include groups and individuals that are dedicated to a single-issue, such as opposition to abortion or immigration," the warning says.

According to Steve Benen, Republicans do excel in one thing, "manufacturing a controversy out of nothing." One of the best examples is "this week's flap over a DHS report on potentially dangerous right-wing extremists." Benen notes that the DHS had also "prepared a similar report about left-wing radicals (curious that no one seems worked about that one)."

Think Progress also has information about two earlier reports. A DOE report from April 2001 titled “Left-Wing Extremism: The Current Threat.” The DHS prepared a report on January 26, 2009 titled “Leftwing Extremists Likely to Increase Use of Cyber Attacks over the Coming Decade.”

Back then, no one seemed to care.

The Washington Monthly finds that this outrage of the Republicans is not only ill-founded but it hasn't been well thought out.

For one thing, DHS produced a similar report on radical, potentially violent, left-wing extremists. For another, the FBI published a similar report about the far-right fringe and potential security threats in 2008, and no one seemed to raise an eyebrow.

But perhaps most importantly, if the DHS report is evidence of some kind of nefarious White House agenda, it seems Obama's Republican detractors are complaining about the wrong White House.

The report on right wing groups, it turns out, was prepared by the Extremism and Radicalization Branch of DHS' Homeland Environment and Threat Analysis Division. That Division falls under the purview of the Under Secretary For Intelligence & Analysis -- or, in this case, the Acting Under Secretary For Intelligence & Analysis Roger Mackin, who was appointed on September 10, 2008 by noted left wing partisan George W. Bush.

Yep, the report about right-wing extremists that have Republicans worked up was, in fact, requested and prepared by Bush administration officials, an inconvenient fact that might undermine this week's talking points a bit.

But that hasn't stop the far right from asserting the 'F' word...Fascism.

The far right has seen the fresh face of fascism, and it looks like the civic-minded legislative love child of Sens. Ted Kennedy, D-Mass., and Orrin Hatch, R-Utah.

Most Americans applauded last month when the Senate voted across party lines to expand national-service opportunities. How could you not? The Serve America Act, which passed easily 78-20, invests $5 billion in volunteer corps focused on education, clean energy, health care and veteran issues. In a symbolic but meaningful gesture, the bill also designates Sept. 11 as a National Day of Service, thus expanding a post-9/11 concept of patriotism previously limited to dying in Iraq and shopping at JC Penny.

The Service Act will help millions of people learn to read, go to college, stay warm and connect with their fellow citizens. Upon passage, it was immediately hailed by 9/11 survivor organizations, literacy advocates, veterans groups and the AARP.

But not everyone feels warm and fuzzy about the bill whose House version was dubbed the GIVE Act. Among readers of WorldNetDaily and other sites that bridge mainstream conservatism and the lunatic fringe, the biggest question was whether President Barack Obama had shape-shifted from Stalin into Hitler, or had morphed into some grotesque dictatorial hybrid unique to history.

Whatever the genus of the beast, it was agreed in these corners that the Service Act heralded the end of the Republic, the end of Liberty, and the end of Boy Scouts helping little old ladies across the street.

There was a time when there was a distinction between the far right and the right wing. Lately, morphing seems to be going further toward the right.