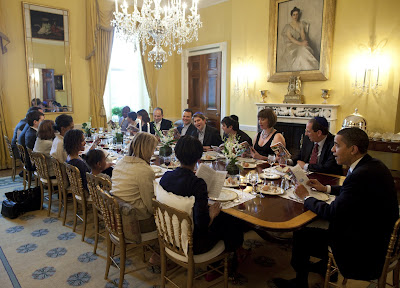 Why is this night different from any other night?

On Thursday evening the second night of Passover, President Obama held a Passover Seder at the White House with family and staff. Passover celebrates the Jewish exodus from Egypt after 400 years of slavery.

The Seder, it turns out, is a fulfillment of a vow that a small group of Obama campaign staff made during their Seder last year, on April 19. Unable to go home for the holidays, the group of about 10 held an impromptu Seder in the basement of the Sheraton Hotel in Harrisburg, PA., as the Obama campaign neared the end of its long primary campaign battle in the state.

Obama participated in the Jewish ritual, along with a few friends who were traveling with him that day. At the end of the ritual, after the traditional refrain "Next year in Jerusalem!" Sen. Obama and others in the group jokingly added, "Next year in the White House!"

So this year's Seder "is meant not only to celebrate the holiday but also to reflect on all that has happened in our lives" since the Harrisburg Seder, the official said.

The White House said the Seder meal was traditional, including matzo, bitter herbs, a roasted egg and greens in the family dining room in the executive mansion. The evening also featured the reading of the Haggadah, the religious text of the holiday.

"By hosting the first presidential seder in America's history," President Barack Obama shows the personal and deep relationship his has with the Jewish community, said Alexis C. Rice, the deputy executive director of the National Jewish Democratic Council. "There is no question, Obama is a true friend of the Jewish community."

White House aides say they believe this is the first president-hosted Seder at the White House.

He hardly needs to do "outreach" to Jewish voters. So his seder wasn't about that.

What was it about? Well, it's about the fact that he and his wife have actual Jewish friends. And the fact that they live their lives in the way many urban people do – interested in people who are different, not afraid of them or put off by them; interested in their customs and ways; comfortable in diversity.

By which I mean actual diversity.

This is just one more reason to love this guy...his breadth and depth, intelligence and goodness, and our good luck to have him as president are revealed every day.