Another Down-Side to Ponder 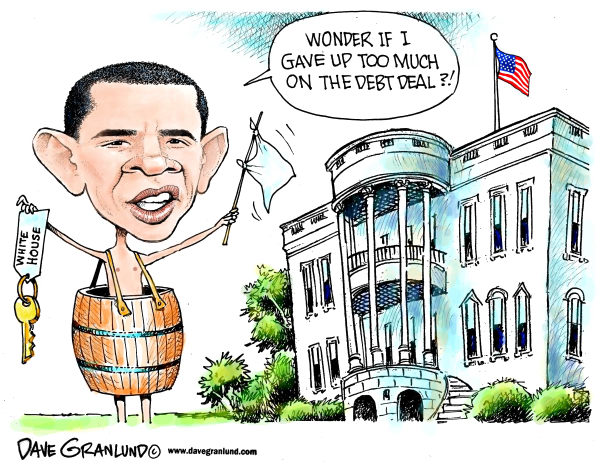 The closer you look the worse it gets...Debt ceiling deal does not include unemployment extension

There are some deals that look better the more closely you look at them. The debt ceiling deal is pretty much the reverse. The details that emerge upon closer inspection are things like this:

White House officials confirmed that there would not be an extension of unemployment benefits as part of the final package. The administration had insisted that an extension be part of the grand bargain it was negotiating with Boehner. But when those discussions fell apart, so too did efforts to ensure that unemployment insurance was part of a final package. A senior administration aide added that the president would push for an extension in the months, if not weeks, ahead.

Back when the Bush tax cuts were extended, an unemployment benefits extension was the big thing we were supposed to cheer—and it was important for millions of people who are out of work. But it broke historical precedent and in so doing set up a dangerous new precedent, as Joan McCarter wrote at the time:

Unemployment benefits have always been emergency spending and have always been extended, by Republicans and Democrats alike, and for longer periods than 13 months. Ceding its status and not hammering on the fact that the Republican position is radical is the first problem with this deal. The second problem is that it just kicks the can 13 months down the road, when the GOP will happily find another hostage (Social Security? Medicaid? Pell Grants? More food stamp cuts? It could be anything) to hold out on. And we'll be right back here again.

Under the current debt ceiling deal, Democrats have given away practically everything available and Republicans still have a much-needed unemployment extension to hold as a bargaining chip. In fact, an unemployment extension will be even more sorely needed as this deal craters the economy and puts more people out of work.

He gave away the House!